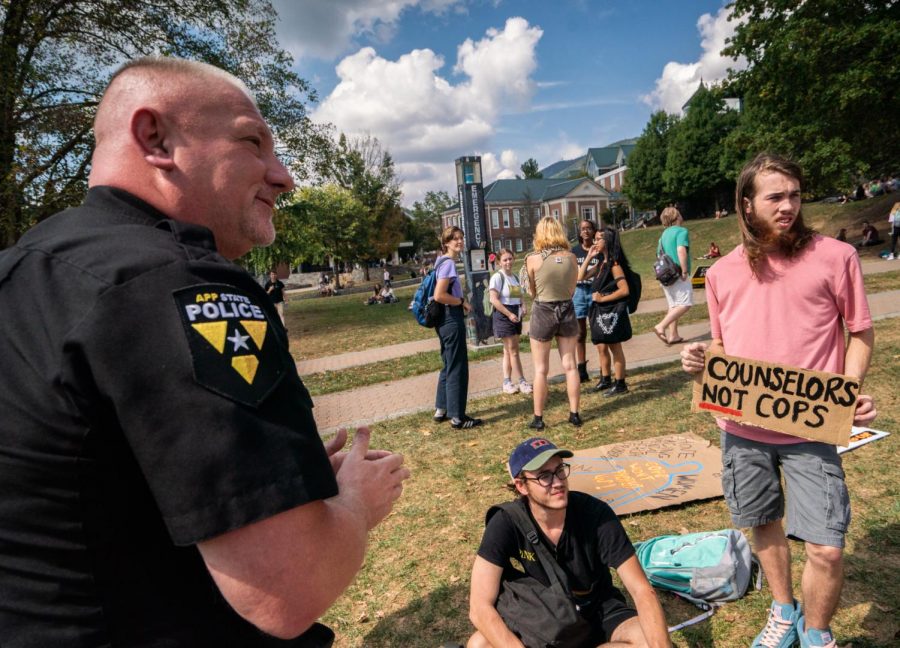 The protest, organized by the App Coalition for Responsible Policing, was coordinated under the title “Fewer cops, more doctors.” The demonstrators called for more mental health resources and less law enforcement presence to nurture campus health.

Apart from their concern for mental health resources, demonstrators said that cadets represent issues of racism and underrepresentation of students who are marginalized.

Junior interdisciplinary studies major Ray Christian has lived in Boone for 16 years and said she recognizes issues of diversity that the community and App State face.

“A college campus is supposed to be a space of freedom and expression, and just having student cadets affects your ability to politically express yourself and for black and brown students to feel safe,” Christian said.

ACRP is comprised of members of App State’s chapter of Democratic Socialists of America and students from other organizations across campus. The Asheville chapter of the Party for Socialism and Liberation provided legal support and observation for the protest. With signs reading, “Release the budget” and “I pay tuition for App State not police state,” protesters said they were frustrated with the lack of transparency about the cadet program’s budget and how the money could be allocated to hiring more mental health professionals.

The Counseling Center sometimes refers students to off-campus providers because, “We have a wait for services and you may get an appointment in the community more quickly,” according to the center’s website.

Protestors attributed the wait to the fact that center is understaffed – there are 13 clinical staff members at the counseling center that provide services for App State’s student body of more than 19,000.

Cadets are students enrolled in the two-year Appalachian Police Officer Development Program for those interested in law enforcement to pursue relevant training.

Cadets who complete training, meet certain requirements and are at least 20 years old, the legal age to become a police officer in North Carolina, are invited to the Appalachian Police Academy in the summer.

Andy Stephenson, App State Police chief and director of public safety, said cadets are never armed. However, students who graduate from the Appalachian Police Academy and are certified officers carry weapons while on duty.

“Anyone armed on this campus is a fully sworn North Carolina police officer,” Stephenson said.

In response to the demand to end the cadet program, Stephenson said it’s “not going to happen.”

“It’s a source of pride for the university, and it’s great for students,” Stephenson said.

Stepheson said he does not control the budget for the program, and its funding comes from a variety of sources.

“I think (App State Police are) getting stereotyped here,” Stephenson said. “I think people need to have some dialogue with me and get to better understanding of what we’re trying to do because we’re trying to work with the community.”

At the demonstration, protesters and bystanders disputed over policing and politics at App State.

As protesters chanted, “Less cops, more doctors,” some bystanders interacted by challenging the demonstrators’ statements and shouting back.

“I don’t think the protest is really necessary because the cadet program is here to help students that are interested in becoming police officers,” said Joseth Perez-Fernandez, freshman computer science major. “I feel like (cadets) are watching out, keeping us safe.”

Some protesters said they were fearful of the authority the cadet program gave students over their peers.

“The power structure is there. You can’t ignore the fact that it is a danger and puts them in a place of supremacy,” Christian said.

President of Appalachian Social Justice Educators, Korbin Cummings said she was upset with the lack of diversity among the demonstrators and organizers of the protest.

Cummings said ASJE has focused on the issue of police cadets for a long time. She believes cadets’ presence represents a lack of concern for other issues that need to be addressed on campus, like a lack of mental health resources for students who are marginalized.

Stephenson said he invites students to talk to him about how App State Police can improve their relationship with groups on campus.

“I invite you to come and talk to me and then decide if you want to protest us,” Stephenson said.