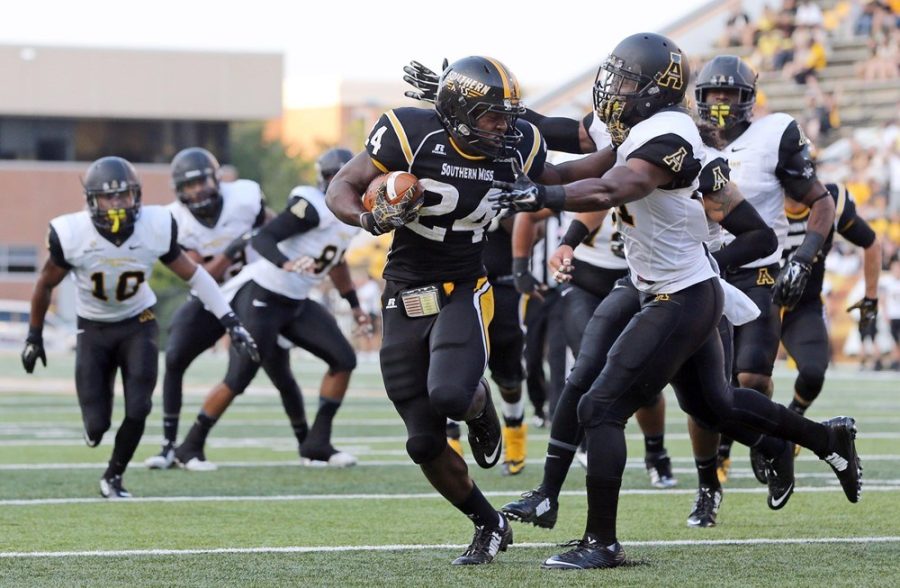 Southern Miss defeated App State 21-20 in 2014 in the only ever matchup between the two programs. After the Mountaineers scored a late touchdown to come within one point, the Golden Eagles blocked the extra point attempt and won by one.

The University of Southern Mississippi accepted its invitation to join the Sun Belt Conference Friday.

App State welcomes new competition, a team that defeated the Mountaineers in 2014 21-20 in the only ever meeting between the two. The move will go into effect no later than July 1, 2023, and is the conference’s first addition since Coastal Carolina accepted its invite in 2015.

“Words can’t describe how excited we are,” Sun Belt Commissioner Keith Gill said. “We feel like this is such a perfect fit for the Sun Belt, and this is an absolutely wonderful marriage and partnership that we’re about to embark on.”

The Golden Eagles received an invitation last week, and after acceptance, the Sun Belt CEOs voted them into the conference unanimously. The addition moves the Sun Belt to 13 teams and 11 football programs.

“This move will allow our student athletes to compete in what I believe to be the best and the fastest growing Group of Five conference in the country,” said Rodney Bennett, president of Southern Miss.

Southern Miss departs from Conference USA after being a member since 1996. The move comes on the heels of six fellow Conference USA members moving to the American Athletic Conference. The once 14-team football league has been cut in half and will continue to crumble if Marshall and Old Dominion also join the Sun Belt.

The Golden Eagles have a rich history in athletics, competing in the College World Series in 2009 and have 10 football bowl wins to their name, including a win over Sun Belt member Louisiana in the 2016 New Orleans Bowl. The football program was home to three-time NFL MVP Brett Favre from 1987-90.

“We are excited about adding our rich tradition of success and passionate fan base to a conference that values those attributes,” said Southern Miss Director of Athletics Jeremy McClain.

The Mountaineers’ one matchup with Southern Miss was a 21-20 loss back in 2014, App State’s first year in the Sun Belt.

On par with the conference realignment moves happening around the country, this move is focused on football as the Sun Belt trends toward having 14 football programs within the conference.

“When the national realignment discussions began, our goal was to only add a school if it added value to our conference,” Gill said. “We knew Southern Mississippi would make the Sun Belt stronger.”

The Golden Eagles are located in Hattiesburg, Mississippi, and will be the only team from the Magnolia State in the conference. They will likely compete in the West Division with bordering universities like Louisiana and Arkansas State. The last five conference championships were claimed by the East Division, but new blood could change the trend.

“We feel like Hattiesburg in Southern Miss. fits perfectly in the Sun Belt,” Gill said. “There’s going to be great regional rivalries.”

Southern Miss is the first domino of four teams that are expected to join the Sun Belt in the coming weeks. James Madison, Marshall and Old Dominion are expected to accept invites to the conference within two weeks according to Chris Vannini of The Athletic. If all four deals are completed as expected, the Sun Belt will boast a 14-team football conference as soon as 2023.