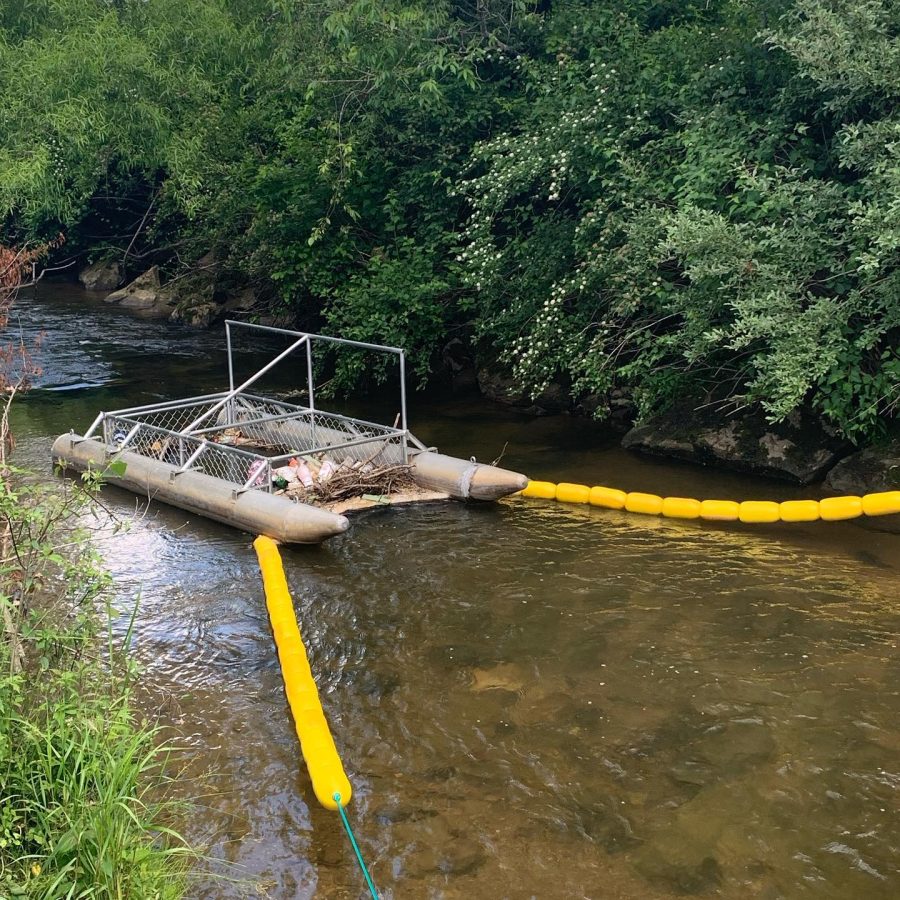 Courtesy of the Town of Boone

The Trash Trout device located on Winklers Creek, May 2021.

A new environmental invention and the declining population of red wolves were the focus of the university’s latest installment of their Spring Sustainability Film Series.

“What I found about this project that was so intriguing is the friendships that have now led to the Trash Trout being in place in the Town of Boone,” said Matt Groce, the film’s director, at the screening event.

Boone’s Trash Trout, a device made of recycled fencing and pontoons used to collect litter in river basins, was installed at Winkler Creek in May. Groce said the Trash Trout has gathered over 63,000 pieces of trash.

The Trash Trout team documented 14 cleans of Boone’s Trash Trout from June to March of this year. Styrofoam made up 74% of all collected trash.

“(Styrofoam) takes a very long time to degrade. And when it does degrade, it leaks a bunch of chemicals and infiltrates our groundwater and soil,” said Hannah Woodburn, MountainTrue Watershed coordinator.

Woodburn facilitates the research of water samples from the state’s water supply. Microplastics, invisible plastic debris, have been found in every water sample her team has taken, including surface and rainwater. Recent studies also highlight microplastics in human blood.

“It’s infiltrating all of these different layers of our brain, our organs, and even though BPA was banned, there are other molecules that are mirror images of it,” Woodburn said. Bisphenol A is an industrial chemical found in plastics and can disrupt biological processes in humans.

“Across the board, folks have been like ‘This is incredible, we need more of them,’” Hill said. “It’s been a tremendous engagement tool.”

George Santucci, sustainability and special projects manager for the Town of Boone, said he is actively looking for more effective solutions that are attractive to the outer community. He thinks businesses implementing sustainability initiatives could be a good starting point.

“In my opinion, the best way to start is a targeted incentive program,” Santucci said. “Telling people what to do is not a great way to go. People who want to listen will listen. The people who don’t want to listen are just gonna flip you off.”

“I think there’s a lot of misconceptions about sustainability, not only at App but in general. A lot of people can turn their nose up at individual efforts because mathematically, it’s insignificant,” said Taylor, a senior sustainability major. “But, when you look on the local level, it really can make or break the water and air quality of a community, and even the fabric of a community.”

“Red Wolves’ Last Stronghold” focused on the near-extinction of the eastern red wolves and the fight for their survival. The film was developed by the Wildlands Network with funding from the National Wildlife Refuge Association.

According to the National Wildlife Refuge Association website, “there is positive interest by the general public in knowing that this uniquely American species is back in its historic range making its rightful contribution to our North American wildlife heritage.”

The next feature of the Spring Sustainability Film Series will showcase “DOCUAPPALACHIA” and “Wild & Scenic” April 12 in room 114 at Belk Library.

CORRECTION: Due to miscommunication in reference to the event, related sources to the second film have been removed.