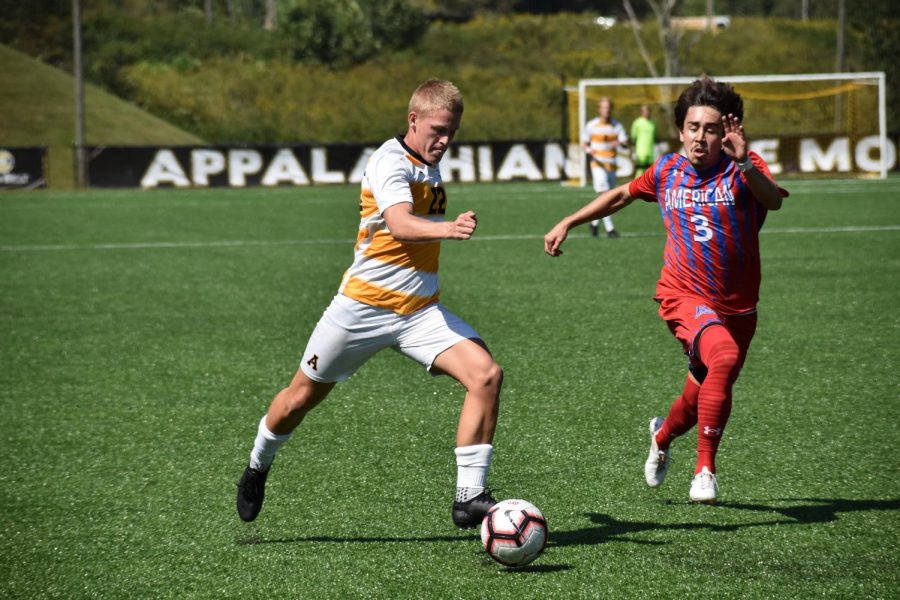 Year after year, hundreds of athletes transfer schools for different reasons. Some players crave more playing time, some transfer for personal reasons and some just find a program that’s a better fit.

For Kelan Swales, a member of App State’s men’s soccer team, he’s found a program that is a great fit for him, and the team has welcomed him with open arms. The speedy midfielder hit the ground running for the Mountaineers, and he hasn’t looked back since.

“Transfers are one of those things where something hasn’t worked out in the first school they’ve chosen,” head coach Jason O’Keefe said. “With Kelan, it was something where he was excited about what we were building (and) felt like he would be a vital part.”

Before moving to the High Country, Swales played one season at Marshall, where he scored two goals and registered a team high six assists. He has carried these performance levels to his new school, where he is currently tied for first in goals with four and second in assists with two.

Despite only starting three games, he has managed to create big moments for O’Keefe’s squad on several different occasions. Swales scored a game-winning goal against the University of Alabama-Birmingham, and turned in a two-goal performance in a 4-2 win against UNC-Greensboro.

“The lads are a family, and they accepted me into the family right away — from the coaching staff to the staff behind the scenes,” Swales said. “The transition was very easy, and they made it very easy for me.”

The team is sitting on a 9-3-1 record, with four games to play and has surpassed last year’s win total of eight. Currently, they are also tied for first in the Sun Belt with a 2-1 record.

Along with Swales, graduate student Alex McGrath is from England and freshman  Kelvin Mulinya and midfielder Mayola Kinyua both hail from Kenya. Sophomore midfielder Dimitris Moristakis is from Greece and has experience with the Greece U17 National team.

O’Keefe and his staff work to ensure newcomers from both the United States and overseas feel a part of the program at App.

“It’s something we’ve been building on every day, every week, every month for several years,” O’Keefe said. “Culture means everything and without it, you can’t win anything.”

As the Mountaineers look to make a run in the Sun Belt Tournament, and potentially the NCAA tournament, the diverse backgrounds and previous playing experiences can give them an advantage over any team they face.