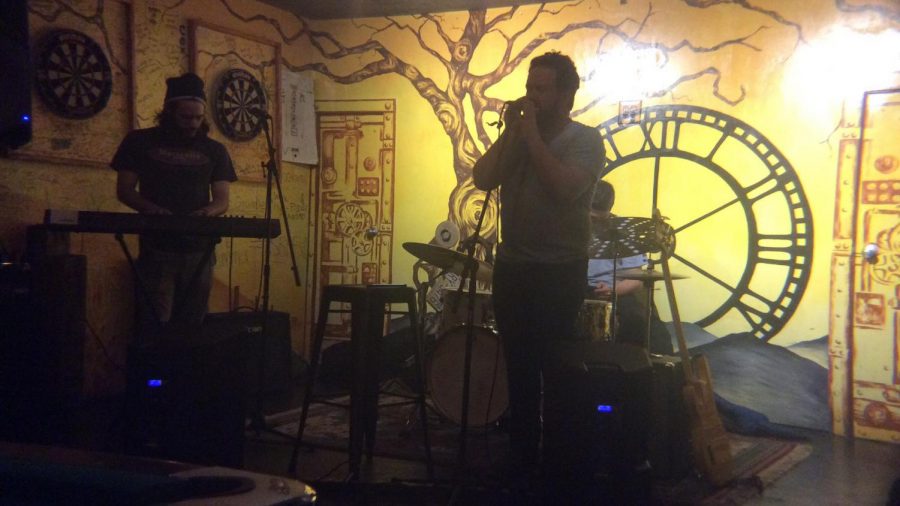 It’s Tuesday night at The Tapp Room, and the crowd is dead. The waitstaff stands listlessly behind the bar waiting on three or four people littered throughout the tables. The Annex next to the bar is devoid of life except for three men unpacking their instruments.

Whitehurst joined the band after Grossi sent him a Facebook message with an invitation to play. He plays in several other bands including Electric Jelly Funk, and first met Grossi in 2016 when they played in a jazz ensemble class together.

Smith, a fellow member of EJF, has known Whitehurst for a long time.

“We started playing together when we were 10 years old. We went to the same schools,” Smith said.

Smith said the band plays songs that strike its fancy. The band has a list of songs in its pocket, Whitehurst said, and these songs include “Chameleon” by Herbie Hancock, “Moanin’” by Art Blakey and “Stitched Up” by John Mayer.

Each week, Grossi texts Smith and Whitehurst about new songs for their repertoire.

Open Mic Night is the brainchild of Grossi and Joshua Keranovic, the assistant kitchen manager for The Tapp Room and booking manager for events in The Annex, The Tapp Room’s offshoot building where it hosts events. Grossi and Keranovic initially tried to host a similar event in summer 2018, but it didn’t work out as they would have liked, Keranovic said.

Grossi said although he would rather have Open Mic Night at Boone Saloon, it already has a Tuesday night crowd, and The Tapp Room has the proper equipment.

Some weeks there is a large turnout, and other weeks are completely dead, but nevertheless, the band plays and hosts Open Mic Night.

“It was something that Boone just needed,” Keranovic said. “I mean, what else is there to do on a Tuesday? Go to Saloon, eat a cheap taco, drink cheap beer? Or, you can go here, watch your friends play music and get a chance yourself to play music.”

Grossi came up with the idea from playing at an open mic night at a bar in Greenville.

“There were a few times when I started that I thought I did great, but there were other times where I’d go up there and forget the lyrics and just bomb and completely embarrass myself,” Grossi said. “But the people in the band, they were disappointed in me, and they let me know, and it was because they loved me and saw that potential in me that they were hard on me.”

Grossi said he wants the house band to provide a similar experience for Boone. He said he hopes people can perform without having to worry about the stage fright of playing alone.

“There’s a lot of repeat people that came out one night and weren’t the best they could’ve been potentially, but they had that little bit of confidence, so it builds on that,” Keranovic said.

People can give a variety of performances, but Grossi hopes that eventually the night will be so packed that it will be music only, he said.

The band is unsure of the turnout going forward, but whatever happens, Grossi, Whitehurst and Smith will be at The Tapp Room at 8 p.m. on Tuesdays playing music and providing a space for people to perform.