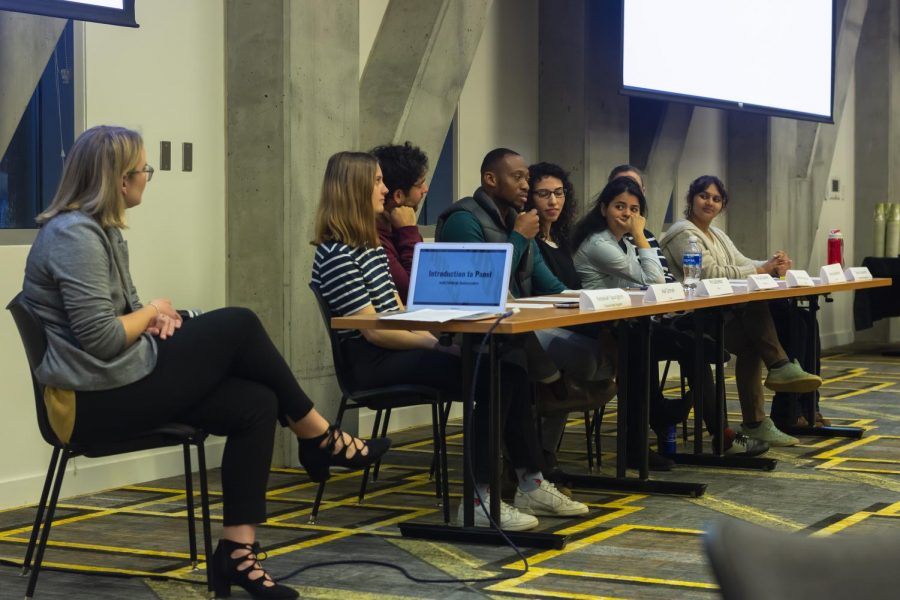 App State's Cultural Ambassadors participate in "Taste of Dialogue", a discussion-based panel held by APPS where questions are answered about life as an international student, their own personal experiences while being a student, interactions with professors and provide a unique experience for others.

Through a panel of cultural ambassadors answering questions and small group discussions, domestic students learned about what being an international student is like at App State at this month’s Taste of Dialogue.

Taste of Dialogue: An International Student Experience at App was presented by the Appalachian Popular Programming Society Feb. 18 in Parkway Ballroom in Plemmons Student Union.

Social work graduate student Asaf Zemah is an international student from Israel and said he wanted to represent his country through cultural events like these as a cultural ambassador.

“I feel like App State does not have many students from Israel, so I felt like I would be a good resource for people,” Zemah said. “I feel like people have a lot of misconceptions of where I come from, and I feel like I can talk in a balanced voice and represent my country and hope people learn more about it.”

Audrey Patterson, chairperson of the Cultural Awareness and Student Engagement council, asked questions such as if panel members experienced culture shock when they came to Boone, and what the main differences between App State and their home university is.

“The reason I am a cultural ambassador is because I want people to learn, I appreciate people that come to me and ask me dumb questions, because they admit ‘I do not know anything,’” Zemah said. “I do not take these things personally; I am not offended by it. If someone comes up to me and asks me a super stupid question, I appreciate that becuase I do not do it myself a lot.”

After the panel, students broke up into small groups to have discussions and answer questions.

“I left my country, I left my people behind to come to America and learn not just in classes but socially and learn about other cultures,” Wuttijareelertsakun said. “I appreciate when people here say they are happy to have us here. It makes me feel at home.”

Maggie Todd, junior recreation management and special education major, is a domestic student that came to Taste of Dialogue after her roommate, one of the panelists from the United Arab Emirates, invited her.

“I studied abroad my first semester out of high school, and I almost put that chapter behind me,” Todd said. “It was hard for me to imagine App being an international spot for people to go to, so knowing there are events like this really inspired me to get more involved.”

Todd said that she learned how difficult it can be for international students at App State.

“A big criticism of America for them was that the people are very egocentric and selfish, and it made me reflect on how I am on a daily basis with interactions with people,” Todd said. “One interaction with somebody can make them really feel different about an entire country.”

“Open your mind, do not judge us because we are different,” Wuttijareelertsakun said. “Listen more, learn more. Being different doesn’t mean we are wrong, we are just different.”