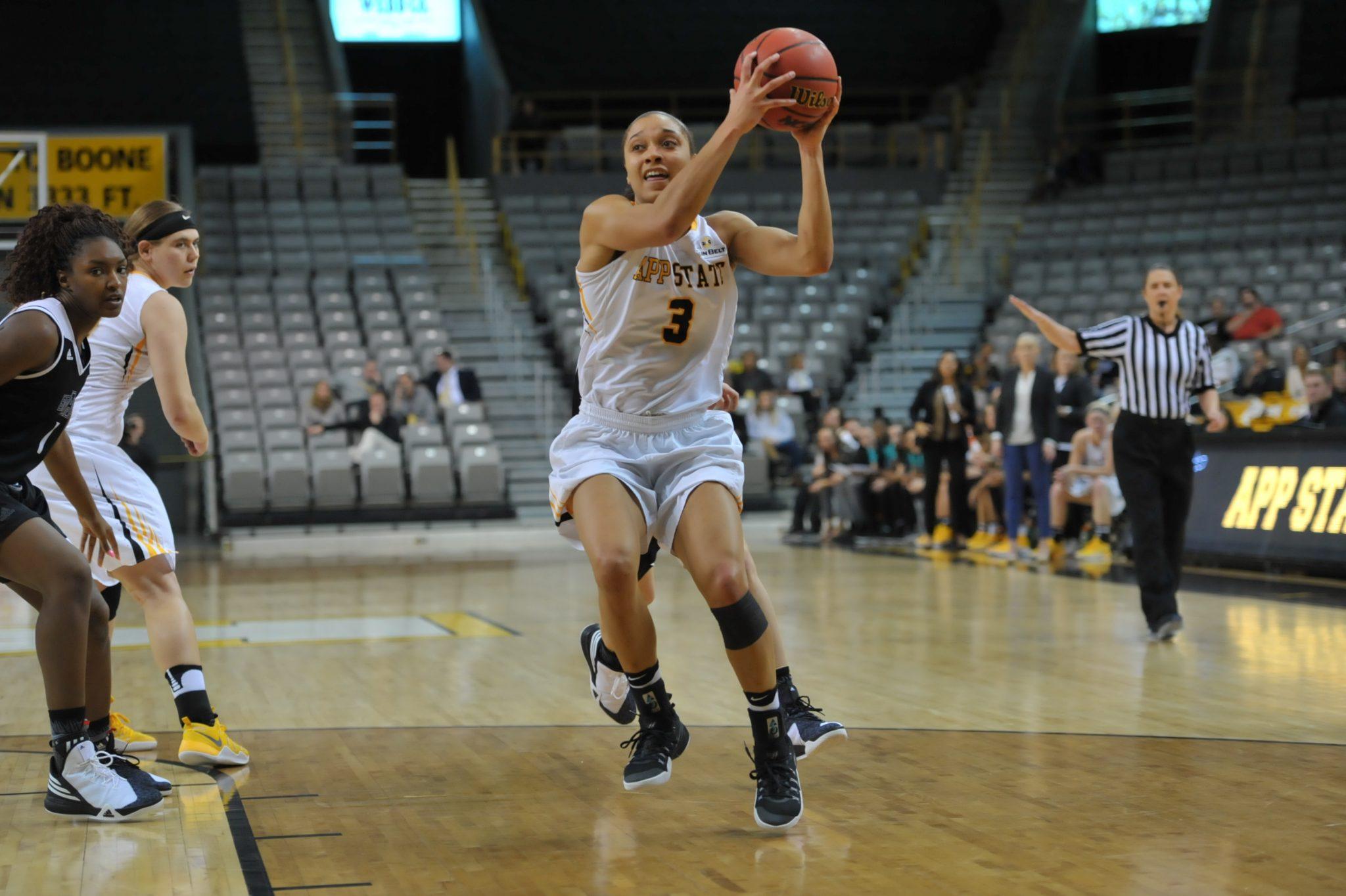 After an action packed week for Mountaineer basketball, in which App State picked up their first conference win with a last second layup against Texas State and head coach Angel Elderkin received the Pat Summitt Most Courageous Award, the Mountaineers (7-7, Sun Belt 2-1) were able to use the momentum to cruise to a 76-50 win over conference foe Arkansas State (3-12, Sun Belt 1-2).

Featuring nine first quarter lead changes, Appalachian State made an 11-0 run, and brought a seven point 40-33 lead into halftime. After halftime the Apps went on a 19-1 third quarter run that put the game far out of Arkansas State’s reach. When it was all said and done, a 30-3 App State run handed Arkansas State their worst conference loss in four years.

“I’m really excited about the effort and the product we put on the floor. It was just an overall team win,” Elderkin said.

Senior forward Bria Carter made it her mission to beat Arkansas State. The senior had a career-high 20 points along with five rebounds, a block and two steals.  Carter scored 13 points in the first half, and then quickly scored seven more second half points before sitting out for most of the fourth quarter as the starters rested while the team coasted to victory.

“You can go down the stat sheet and pick out certain player’s strong play,” Elderkin said on Carter’s performance. “Bria has a mindset and the leadership where she was going to beat this team.”

Carter led a Mountaineers team that outrebounded the Red Wolves 50-34, and forced 26 turnovers.

The Mountaineers’ victory was also highlighted by the first career double-double from freshman center Bayley Plummer, who had 10 points and 10 rebounds. Plummer capped her career day with a steal, and a coast-to-coast layup.

Plummer took the ball away at the opponent’s 3-point line then drove the ball all the way down the court and scored a fastbreak layup. Such plays are usually only for the quickest of guards, not for centers, and the play showed off some great athletic ability on the part of Plummer.

Plummer remained humble after the game despite her freshman success.

“It’s pretty exciting, but I couldn’t do it without my teammates dishing me the ball,” Plummer said.

The Mountaineers had five players in double figures join Carter and Plummer, including freshman guard Brooklyn Allen who had a career-high 10 points, redshirt sophomore guard Q. Murray who had 12 points and senior guard Joi Jones with 13 points. Jones has now scored in double figures 12 times this season.

“I reminded them that last year this team [Arkansas State] went 3-0 against us, and in the first round of the conference tournament they pounded us,” Elderkin said. “Our seniors remembered that and played tonight with some fire and some fight.”

Even after getting some payback for last year with a big win, the Apps are still hungry for more.

“We can’t be satisfied with this win, we have a lot more work to do, but we’re ready play,” Jones said.

The Mountaineers will need to be ready to play, because their next conference opponent is Arkansas Little Rock on Saturday.

Little Rock is currently undefeated in conference play, and was the preseason pick to finish second in the Sun Belt. The Mountaineers will face off with Arkansas Little Rock this Saturday at 1 p.m. in the Holmes Center.