The basketball journey of Ashley Polacek 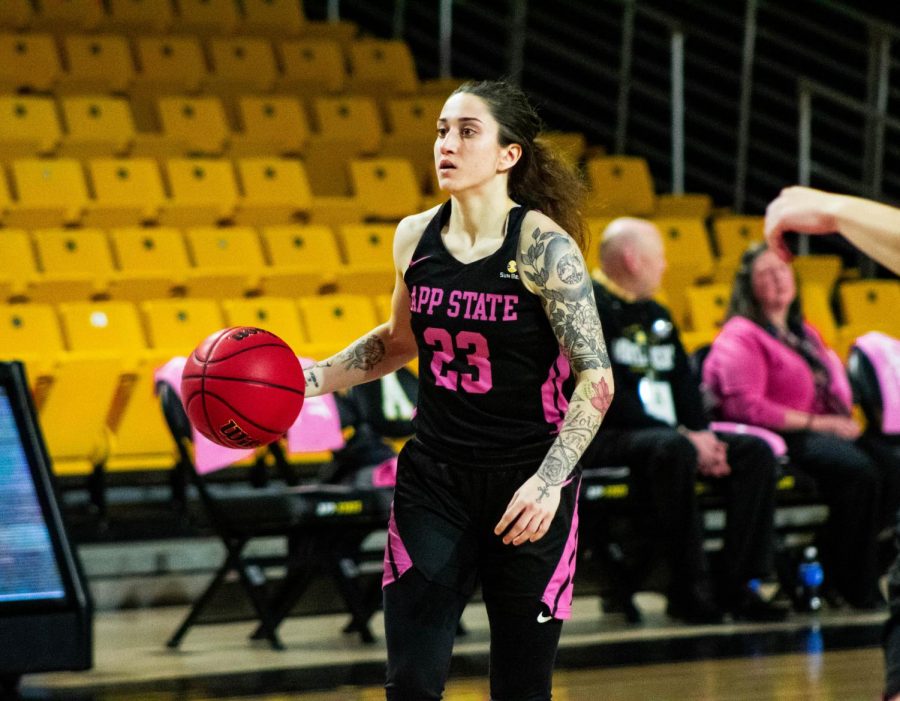 Redshirt senior guard Ashley Polacek leads the Mountaineers in assists and is second in scoring this season.

Ashley Polacek, the second-leading scorer and leading passer on App State’s women’s basketball team, has had quite the journey in her career.

Growing up in Ottawa, Canada, basketball wasn’t the first sport she picked up.

“I was an all-around athlete growing up, and I literally played every sport: hockey, badminton, basketball, soccer, track,” Polacek said. “Basketball and hockey were the main sports that I really liked and enjoyed playing on a daily basis.”

When she was introduced to basketball, her focus was still on hockey. At 15 years old, she quit hockey to pursue basketball. Once she made the switch, playing NCAA Division I basketball became her ultimate goal.

“I put in the work every day, and I knew I had the talent to get out of Canada and play in the States,” Polacek said. “It just comes with confidence; I was prepared for it and envisioned it every day as something I truly believed I could do. I came with the work that I put in, which built that confidence of knowing that I could make it.”

Polacek met her goal when she committed to play for the University of Central Florida. In her collegiate debut as a true freshman, she put up 22 points. She went on to start 23 of 28 games for the Knights her freshman year.

As a sophomore, her playing time dipped as she only started the final 12 games of the season. Polacek decided to explore other options and transferred to App State in 2017.

“I think it was tough for her going to UCF, playing her first year and then not really playing as much her second year, and then transferring here and sitting out,” assistant coach Cristina Centeno said.

When she was able to take the court again last year, the floor general became a vital part of the Mountaineers’ offense. Polacek was one of three players to start in all 36 games en route to the WBI Tournament championship in 2019. She averaged 10.1 points and tied for second in the Sun Belt with 4.4 assists per game. Over the four postseason games in the WBI, Polacek averaged 15 points, 4.8 rebounds and three assists.

This season, she’s averaging 12 points and 3.1 assists per game, both of which are top 15 in the Sun Belt. Centeno said the biggest reason for Polacek’s success on the court is her work ethic.

“I mean she’s always, always, always in the gym,” Centeno said. “Whether she has a good game or a bad game, she’s in the gym early and leaves late. (She’s) always asking for workouts. She could’ve played 40 minutes the day before and the next day, she comes into practice and is working really hard.”

Both years with the Mountaineers, Polacek has led the team in assists. As a point guard, she understands how important the facilitating aspect of her game is.

“You want to put your teammates in the best position possible, considering their strengths and weaknesses, especially as a point guard,” Polacek said. “It’s a team game. There’s no way you can win playing by yourself.”

Watching Polacek play, aside from her shiftiness and passing skills, her many tattoos are also easily noticeable. On her left wrist, she has one that reads “keep going” in capital letters.

“That’s something (that’s) kind of like my mantra,” Polacek said. “In high school, it was just something I always kept telling myself when things got harder. It’s quick and straight to the point — just keep going, keep going.”

On her right leg, she has a tattoo of a cross with roots coming out of it at the bottom and “rooted” written underneath the intersection of the cross.

“Just staying in the present, trusting God and putting everything in his hands,” Polacek said. “Just not focusing too much on the future, going day by day, and doing what I can with what I’m given.”

Focusing on the present is very important to Polacek. She said in high school she would sometimes get anxious about stuff that hadn’t happened yet.

Centeno said Polacek is a focused leader on the court, but that off the court, her personality is a little bit different.

“She’s funny, but she’s very, very intelligent and deep in her own way,” Centeno said. “In some of our team meetings, she may not always speak up or say something, but when she has something to say, I feel like it’s very deep and from the heart. It’s awesome to be around her and be able to see her grow as a person, off the court.”

As Polacek’s fifth and final season of college basketball draws nearer to the end, she said she can look back on her journey and be happy with everything she’s been able to accomplish.

“I know when I’m done with college basketball, I know I can 100% look back and be able to say that I have no regrets,” Polacek said. “I did what I could with what I had, the tools that I had. I think I’m definitely going to be happy with what I’ve done.”