The Listening Post: a place to talk to those who listen 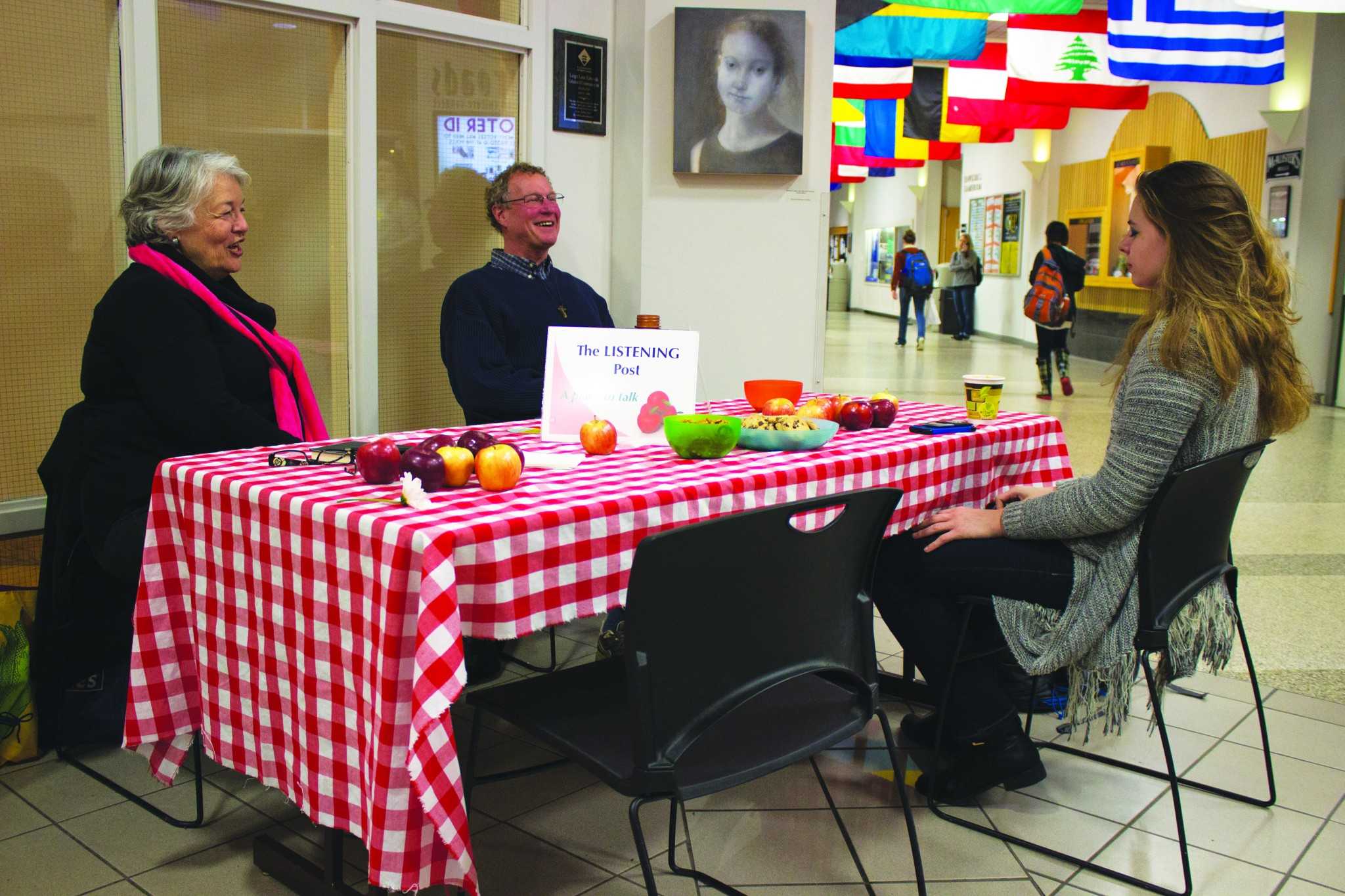 Sophomore Adria West converses with Judy Lilly and Greg Erickson at the Listening Post in the Student Union. Photo by Dallas Linger.

The Listening Post has served as a non-judgmental ear for students to talk to for five years at Appalachian State University. At the Plemmons Student Union and Trivette Dining Hall, two volunteers sit at a table with snacks and a sign that reads, “The Listening Post. A Place to Talk” and listen to whatever students wish to discuss.

“[The Listening Post] was started to give the young students or anyone an opportunity to vent before they explode,” Flynn said.

Since its beginnings in Colorado, The Listening Post has spread to about 150 universities across the nation, Flynn said. The volunteers do not give advice as to what to do in certain situations. Instead, their job is to ask questions which help the students reach an answer on their own terms.

“When I told my oldest daughter I was doing this, she said, ‘You’re listening?’” Flynn said.

The Listening Post in Boone is coordinated through several of the local churches, which is how both Flynn and Valliant became involved. Although the program is run through several churches, volunteers do not discuss personal religious beliefs with their patrons.

“Our mission here is not to represent a church or convert anyone or proselytize our beliefs,” Flynn said. “A lot of people here have a solid foundation.”

Flynn said it has allowed him to improve on his listening skills and not talk about things that have happened in his life.

“Life at this age has given me a lot of experiences that I wish I could share,” Flynn said. “It is hard to do that in this format.”

Patrick “Eli” Schwarz, a freshman international business major, has utilized the services at The Listening Post before.

“The Listening Post gives the students a chance to talk about their lives to an older person, which can be hard sometimes because some students are afraid of talking to older adults about anything,” Schwarz said. “They are often intimidated by older people or don’t have anyone around.”

It has served as a useful tool for him to discuss things that he usually would not with a professor, parent or friend. People talk about a wide variety of issues at The Listening Post.

“A lot of times it’s not anything serious and people have time on their hands,” Flynn said. “They just want a place to talk. I have had someone eat their lunch here before.”

Flynn said that one of his favorite experiences volunteering was when he had a man come talk that was on crutches. Flynn had said to the person volunteering with him that he believed the man on crutches was faking his injury. After his shift was over, Flynn saw the man with crutches in the bathroom not using them.

They smiled at each other and the man told Flynn that the crutches served as a great way to get ladies. “That was an experience I will never forget,” Flynn said.

Flynn and Valliant are very involved in the Boone community outside of their positions at the Listening Post. Valliant is involved in her church, paints, dances, gardens and studies astrology in her free time. Flynn enjoys playing golf, taking care of his dog and spending time with family. With them, he is able to express things that he is not able to while at The Listening Post.

Both Flynn and Valliant have enjoyed their time volunteering with the Listening Post.

“[My favorite part is] connecting with people and creating an open space for them to be comfortable and share what they want to share,” Valliant said.

The Listening Post is open on Tuesdays and Thursdays from 10 a.m. to 3 p.m. at the Plemmons Student Union and Wednesdays from 11:30 a.m. to 1 p.m. in Trivette Dining