“The Schaefer Center Presents’ highlights a variety of cultures 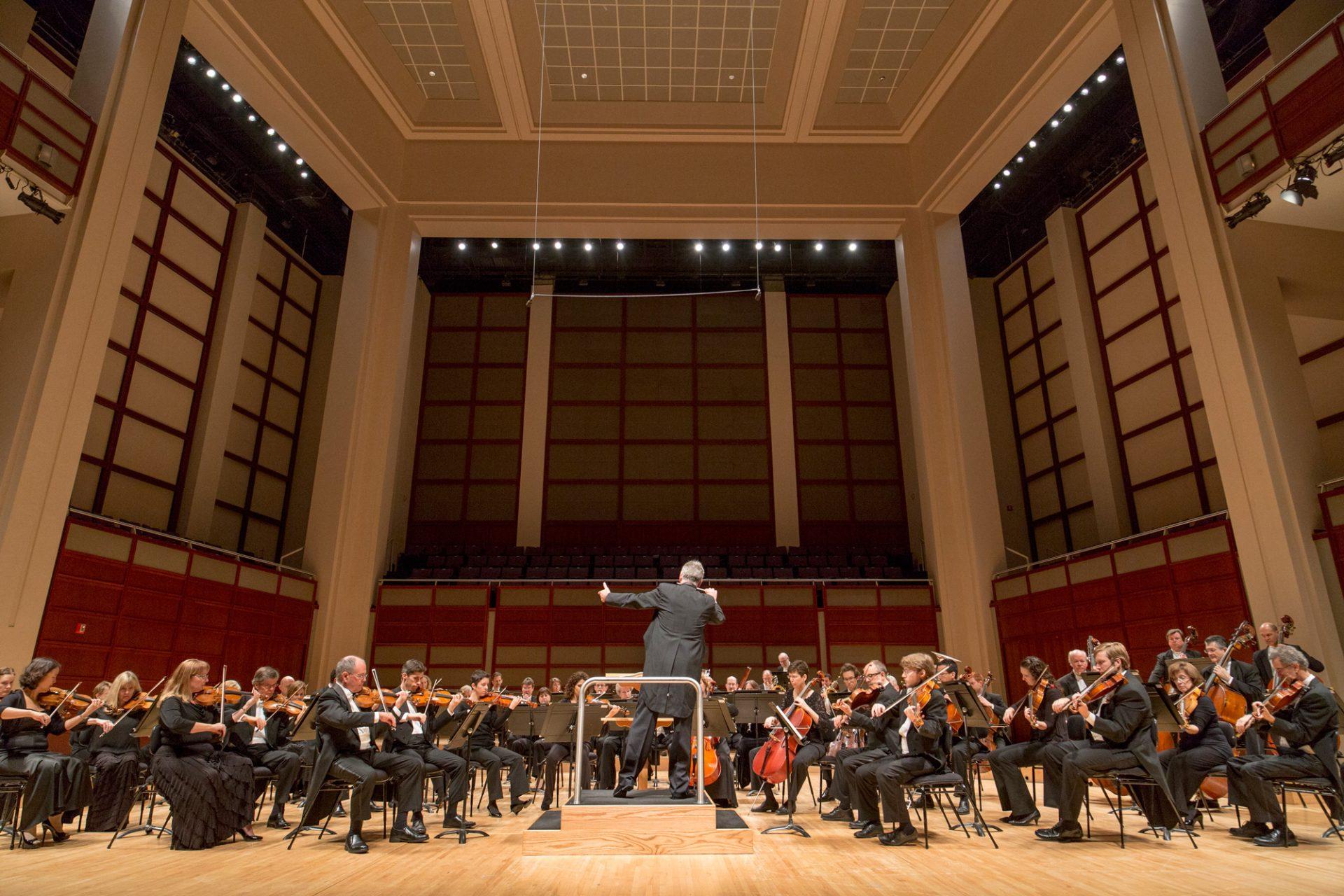 The members of the North Carolina Symphony performing. The NC Symphony visited App State on Oct. 19 in the Schaefer Center.

The 2018-19 season of “The Schaefer Center Presents” kicked off on Oct. 5 with Shovels & Rope, a husband and wife folk duo from South Carolina.

“It was a great concert. If you like folksy or bluesy music, you would like them,” Williams said. “They each play multiple instruments and harmonize together so well.”

On Oct. 19 at 7 p.m., the North Carolina Symphony performed with the Cherokee Chamber Singers and the Hayes School of Music’s Appalachian Symphony Orchestra. The program included works by Leonard Bernstein, Aaron Copland and William Brittelle. Brittelle composed “Si Otsedoha (We’re Still Here)” to acknowledge and pay homage to the Cherokee Nation, according to the program.

Anna Gaugert, director of marketing and public relations at the Schaefer Center, said the series tries to make connections to events on campus.

“Recently in the international hall they put a Cherokee Nation flag, so there are some connections with the Cherokee people that Appalachian is trying to do,” Gaugert said.

Schaefer Center staff could not find an artist from Australia or New Zealand to come while the “Art From Down Under: Australia to New Zealand” exhibit is displayed in the Turchin Center. However, “APPlause,” a companion series to “The Schaefer Center Presents,” booked Didgeridoo Down Under for Nov. 1. “APPlause” allows more than 8,000 K-12 students across the region to see matinee performances for free or low prices.

Gaugert said she is excited for Ballet Folklórico de México to perform Nov. 14, especially because they have not visited App State in 11 years. Based in Mexico City, this folkloric ballet ensemble features authentic costumes and music in their performances, according to the Schaefer Center’s website.

“The United States and Mexico relations are such a topic,” Gaugert said. “A lot of things have changed politically and culturally, and so I’m excited to have them on campus and really expose the community to what they have to bring.”

Students can see Ballet Folklórico de México for $5, which is the lowest price for any of the shows this season. Non-students who live in Watauga, Ashe or Avery counties can get a discounted ticket for $15.

“We’re really hoping that gets community members, students on campus, faculty and staff coming to that event,” Gaugert said.

Along with price accessibility, another goal of the Schaefer Center is to provide a wide range of performances.

“We’re really trying within different genres to also have different subgenres than those, and really expose the community to different tours and not just those popular events,” Gaugert said.

“We like to say we’re a ‘window on the world,’” Gaugert said. “We try and show what’s out there, but bring it to Boone and make it accessible to everybody.”

Gaugert admitted that it is difficult to convince well-established performers to come to Boone, because it does not have an airport nearby.

“As soon as we put an offer in and they hear that they have to drive two hours once they arrive on plane and through the windy mountain road, they’re like nope, not worth it,” Gaugert said.

Gaugert has also done audience surveying with Student Government Association and Appalachian Popular Programing Society in the past, asking, “What artists would you suggest? What day of the week is the better one to come to performances? What time? How much are you willing to spend on tickets?”

As a member of the booking team, Gaugert said a great deal of thought was put into planning this series, right down to the name.

The series, formerly called the “Performing Arts Series,” was renamed “The Schaefer Center Presents” to honor the new facility, according to its website.

Gaugert emphasized that “The Schaefer Center Presents” and “APPlause” are designed to expose as many people in the High Country to the performing arts as possible.

“We just really want to explain to people the excitement of a live performance, being in a performing arts center, and being with other audience members and watching something together,” Gaugert said. “It’s just a magical thing, and if you haven’t seen that for a while or if you’ve never been exposed to that, I say give it a chance and you’ll feel that energy.”

For event and ticket information, visit the Schaefer Center website.