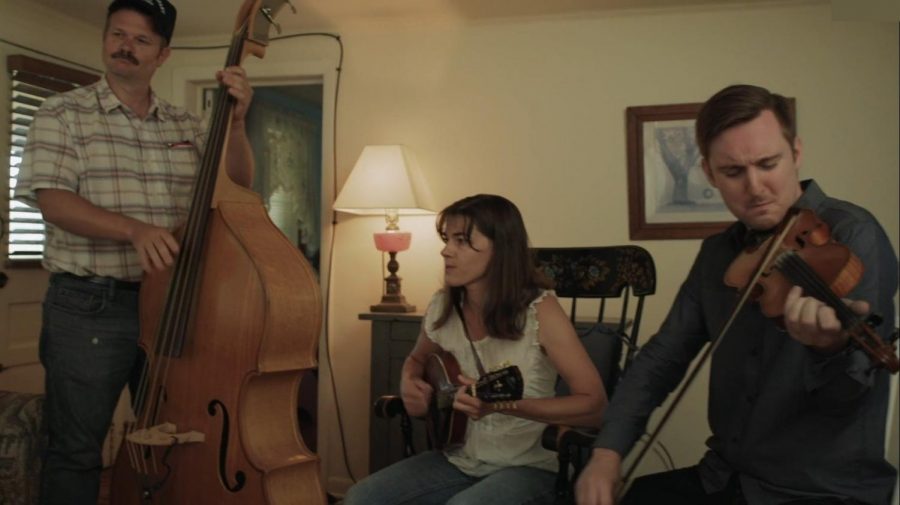 TODD, N.C.– A group of people sit nestled in a cabin in the middle of winter. A screen, several microphones and the sound of an overworked heater surround them. Among this group are two App State graduates focused on recording a soundtrack for an award-winning independent film.

“There’s a lot of Appalachian connections that I’m excited about,” McKenzie said. “It’s just neat to think they got all these musicians together, and it’s cool for me cause it’s an intergenerational soundtrack.”

“The Mountain Minor” tells the story of Charlie Abner and his family, who move away from their home in eastern Kentucky to Ohio during the Great Depression. As time passes, Charlie wishes to return to his childhood home, the place where his passion for traditional mountain music began.

The film features a number of musical performances by cast members, with McKenzie composing the score for the rest of the film. The composer said it was gratifying to add depth to a scene without music.

“It was kind of a rewarding thing to record a piece of music and then watch a scene back that … basically just had nature sounds with it before,” McKenzie said. “Then you can watch it back, and it sort of would bring the scene to life even more with music in the background, and it was sort of a thrill to get to do that.”

Film producer and App State graduate Susan Pepper wrote in an email that she enjoys the sense of tradition that Appalachian music has.

McKenzie  has been playing music since he was 8 years old and studied Appalachian history in high school. Those studies help him discover App State.

“I found out about this school who (sic) had a hillbilly as a mascot, but they were proud of it,” McKenzie said. “It was a place where mountain people had originally come to become educated and become teachers and educators, and I didn’t apply to another school. I was just like, ‘this is the place I’m going.’”

During his time at App State, McKenzie explored his passion for Appalachian history and its music, cultivating the interest that would prepare him to compose the “The Mountain Minor” soundtrack.

“There was so much music here and so many great faculty and community members, all interested in Appalachian history,” McKenzie said. “That’s kind of what brought me to Appalachian and eventually brought me to the job I have in the archives there now.”

Pepper says her time at App State helped her gather resources that she used when working on “The Mountain Minor.”

“I did some research around older ballad singers while working on (a) master’s degree in Appalachian Studies,” Pepper wrote. “Besides developing a real appreciation for where the music comes from — and believing that was something worth sharing, the main thing it helped me with was making connections with other musicians and experts that were helpful in the film.”

Actor and musician Lucas Pasley attended App State and was involved in the Appalachian Popular Programming Society’s Heritage Council the year it conceived the Old-Time Fiddler’s Convention. Pasley believes his time at school and on the council helped prepare him for his acting role in “The Mountain Minor.”

“App State really gave me a lot of opportunity. I would say a lot of support in exploring Appalachian heritage,” Pasley said.

It’s no coincidence that so many App State graduates were involved with the film and soundtrack, Pasley said.

“I think that people interested in Appalachian culture are naturally drawn to our university,” Pasley said. “Then, of course, the App studies program as well. I think App State has a great balance as being a very progressive and innovative school, while at the same time honoring our Appalachian culture (and) traditions.”

Although the film has been out for a year, Pasley, Pepper and McKenzie look forward to the soundtrack standing on its own.

“I think some of the songs that were not necessarily real prominent in the movie will get to be in the spotlight,” Pasley said. “I think it’s just nice to spotlight the music that was often a supporting role in the movie, now gets to play a dominant role in the CD.”

CORRECTION: A previous version of this story incorrectly stated that “The Mountain Minor” was released on Aug. 24. The error has been corrected.