For many of us growing up, a C- grade in a class might mean a one-on-one teacher meeting, parents restricting privileges until the grade went up, or taking it upon yourself to put in the extra work to improve. For many public school students in North Carolina, a C- doesn’t cut it anymore, because our government has already put us at an inherent disadvantage.

“C-” is the grade Education Week, a non-profit publication focusing on K-12 education, gave North Carolina’s education system for 2019 in their annual Quality Counts, a comprehensive data-driven analysis of every state’s public education system. Our state’s system currently stands 37th out of the 50 states and the District of Columbia. The grade is low largely because the state received an “F” in per-student spending, 48th in the nation. On the bright side, North Carolina received a “B+” in equity, so we can be assured the government is spending equally little on each student. 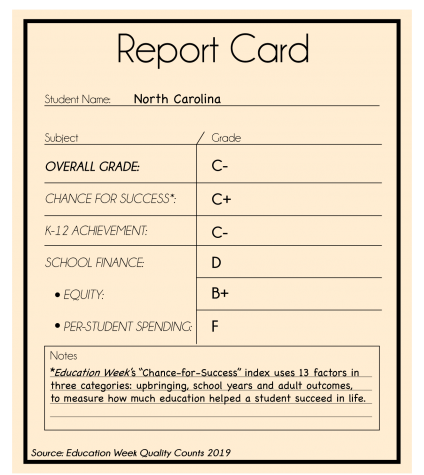 This is unacceptable. Education is the key to success in life and the basis of a strong economy. How many people raised here are left out of shared economic gains because the state provided a below-average education?

The North Carolina General Assembly is deadlocked on the budget because Republicans no longer hold a veto-proof majority and Gov. Roy Cooper vetoed their first proposal. Cooper called for raising teacher pay to the “best in the Southeast” and to allocate $29 million for more learning materials for students. Cooper made education a focal point of the budget. Republicans would rather cut taxes on corporations.

Republicans released a plan that would give teachers the opportunity to receive a raise, if they create a legislature-approved plan to help students improve in the classroom. Essentially, Republicans are leveraging under-paid teachers to do the legislature’s job for them.

The majority of education funding comes from the state government. Although the budget deadlock is primarily over Medicaid expansion, Cooper needs to also put his foot down over education spending.

Many parents don’t accept a C- grade as satisfactory. We must hold our government to a higher standard than our parents hold us. We are paying their salary, after all.