The team behind your favorite team 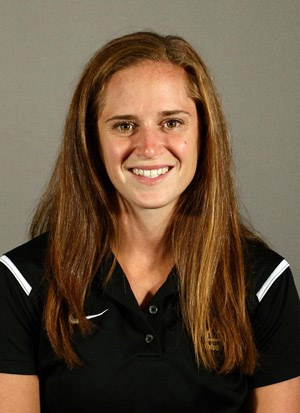 Maggie Berkowitz is an athletic trainer for both women's soccer and track and field.

Some of the most valuable members of every team never get any time on the field.

Biddle was interested in the medical field, but didn’t want to go the traditional route. She ended up shadowing her high school’s athletic trainer, and “fell in love” with athletic training.

“I did a summer internship with a collegiate summer baseball team which sparked my interest in working baseball,” Biddle wrote in an email. “Now, I couldn’t imagine my life without baseball in it.”

Biddle described her role in athletic training as “before, during and after” injuries, as athletic trainers help prevent, treat and heal injuries of players, in addition to working with coaches on what exercises are best for their athletes.

“Our hours are pretty demanding,” Berkowitz said. “We’re here before and after all practices and games and we travel with the team.”

Biddle sometimes works 80 hours in a week due to travel during baseball season.

In the off-season, Biddle does not get many days off. She is often taking players to doctor’s appointments and helping players recover on their NCAA mandated rest days.

In the 1970s, only one percent of members of the National Athletic Trainers’ Association were women. Now, 55 percent are women.

“I’m a firm believer in getting the best person for the job,” associate athletics director for student-athlete health and well-being, Jon Mitchell said. “I also want to put those people in a position where they’re going to succeed.”

Mitchell said he believes the collegiate setting for sports is more diverse than the professional setting.

“‘Who is going to be the best person in that situation?’ If that person is a female, that’s who we’re hiring,” Mitchell said.

Biddle, who works primarily with male athletes, enjoys it and wrote that her experience working for a men’s sport at App State has been wonderful.

“There are 7 of us who primarily work with the team and I am the only woman,” Biddle wrote. “In my opinion, it’s nice to have a female voice on our staff. We just see things differently sometimes.”

Berkowitz worked for men’s lacrosse as a student.

“You do have to set boundaries,” Berkowitz said. “Boys will be boys and they need to know that you’re there to treat them and help them.”

Berkowitz, Biddle and Mitchell all noted the uptick in women in the professional world of sports gaining representation.

Biddle wrote that it is great to see women like Sue Falsone, former head athletic trainer for The Dodgers working as women in professional sports.

“There is no reason a woman can’t do the job just as well as a man,” Biddle wrote. “I think this applies to many jobs including coaching jobs. Players and staff should have the same respect for a female as they would a male in that role.”

Berkowitz said her graduation class was 14 women, and it was nice to know there were that many other women entering the field at the same time as her.

“As a whole, females in athletic training have come a long way,” Berkowitz said.

In recent years, women have made huge strides in the world of sports. For example, this season the National Football League hired their first female referee.

“I absolutely love my job and the unique opportunity I have to spend so much time with such wonderful players during some very formative years,” Biddle wrote. The relationships I have as a result of my years as an athletic trainer are the best perk of this job.”