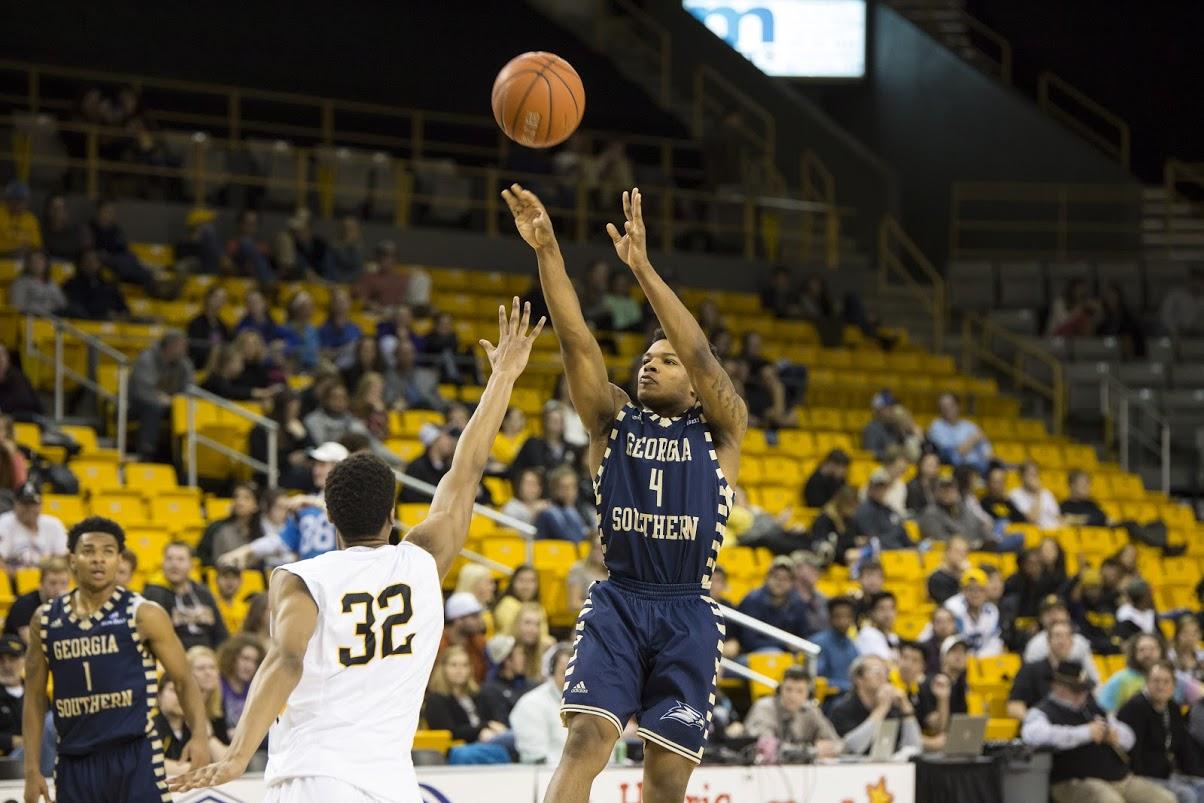 Georgia Southern freshman guard Tookie Brown hoists up a 3-pointer during Monday's 101-100 victory over Appalachian State. Brown finished the game with 34 points on 11 of 22 shooting. Chris Deverell | The Appalachian

The Mountaineers and Eagles brought a show to the large crowd at Holmes Center the minute after a tip off with both teams trading threes. Senior guard Frank Eaves hit four 3-pointers within the first five minutes of the game, going 4 for 6.

Georgia Southern took their largest lead of the game with a minute remaining in the first half, pulling ahead 46-35. The Mountaineers continued to rely on Eaves and freshman guard Ronshad Shabazz to bring them within four at the end of the half, 46-42.

Eaves finished the first half with 19 points off five 3-pointers and Shabazz finished with 16 points on 6 for 8 shooting.

The first half would just be the start of a second half to remember for the ages.

Frank Eaves stayed hot in the second half and gave App State the lead with a 3-pointer to make it 47-46, after a 7-0 run and a huge dunk by Shabazz.

“The second half we came out and punched them in the mouth,” Babic said.

Both teams continued to fight back and forth and the Eagles did not let foul trouble affect them in any way.

It seemed every time the Mountaineers would begin to pull away, the Eagles would soar right back into the game. Shabazz gave the Mountaineers a six-point lead with seven minutes remaining, which was cut to two over the next two minutes.

“They made a lot of plays that ideally should have put the game away and we just didn’t put it away,” Fox said.

App State took an eight-point lead with 2:48 remaining in the game thanks to a huge dunk by senior forward Jacob Lawson, and everything was swaying the Mountaineers way.

However, key turnovers by leading scorers Eaves and Shabazz over the next 30 seconds brought the Eagles back within one on a 7-0 run with 2:06 to play.

“We turned it over a few times and didn’t get rebounds we should have gotten. Everything adds up,” Eaves said.

Lawson went off on a fast break for a ferocious one-handed jam to give the Mountaineers a 98-93 lead with one minute to play and the crowd shook the Holmes Center.

With five seconds remaining, two Lawson free throws gave the Mountaineers a 100-97 lead and it seemed the game was all but over.

That was before Georgia Southern sophomore guard Mike Hughes, a North Carolina native, made arguably the biggest shot of his life. Hughes pulled up from 35-feet behind the 3-point line with one second remaining to tie the game at 100 and was fouled by senior guard Chris Burgess.

Fox stayed cautious with what he said about the referees, who seemed to make questionable calls all night.

“I didn’t think he was fouled. The guy fired up a 35-footer and the call was made,” Fox said. “I’m not going to say anything else that will get me in trouble.”

Hughes made the free throw with 0.9 seconds remaining to give the Eagles a 101-100 victory over the Mountaineers.

Georgia Southern coach Mike Byington said he had confidence in Hughes at the line, but was just as in shock as everyone else.

“I had no doubt he would make the free throw, but the three pointer was ridiculous,” Byington said.

Hughes, a former Winston Salem prep high school player who has played with Los Angeles Clippers guard Chris Paul and Mountaineers Ronshad Shabazz, said he was not surprised the shot went in.

“I shoot crazy shots like that at practice just messing around and I am glad it went in and that my teammates had confidence in me,” Hughes said.

Eaves, who shot a Holmes Center record with a career-high nine 3-pointers, finished with 37 points. He tried to pull away some positives from the heartbreaking loss.

“We have been working hard and it has been clicking as you have seen over the last two games. We are just unfortunate we couldn’t put this one away,” Eaves said. “We deserved it. We worked really hard and the coaches worked really hard.”

Shabazz, who finished the night with a career-high 29 points, said the Mountaineers would not let this happen again moving forward.

“At the end of the day we have to take this and learn from it. We can’t put the game in anybody’s hands,” Shabazz said.

The Mountaineers fell in one of the craziest endings in recent history, but they will have the chance to redeem themselves when they head on the road to take on the Troy Trojans (6-13, 1-7 Sun Belt) Thursday at 8:30 p.m.