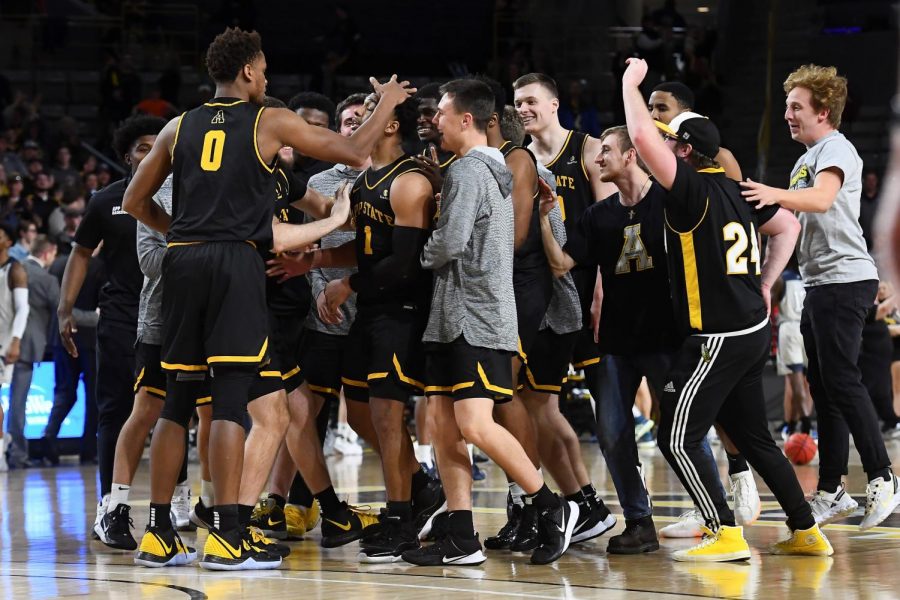 App State ultimately fell to Georgia State 76-65 in this game, but Lewis showed a glimpse of the player he could become as he scored a career-high 24 points in an away game against one of the top programs in the Sun Belt. Lewis shot an efficient 7-for-9 from the floor and knocked down 10-of-11 free throws in the contest.

No. 9: Forrest and Delph lead Mountaineers past ECU to avenge OT loss to Pirates in 2018-19

In the third game of the season, App State defended its home court against in-state opponent East Carolina with a 68-62 victory. Junior guard Justin Forrest led the way with 22 points and sophomore guard Adrian Delph added a then-career-high 19 points.

“We lost to them last year, but it feels good to get revenge this year,” Forrest said postgame.

No. 8: Mountaineers knock off rival Charlotte in defensive battle

A crowd of 2,203 fans watched as the Mountaineers dispatched the 49ers 64-55 in the Holmes Center to move to 3-0 at home. Senior guard O’Showen Williams led App State with 18 points.

“This was the most people I’ve seen here in my years here, and I hope it continues,” Williams said about the crowd postgame.

The Mountaineers opened up Sun Belt play with an 81-71 road win over South Alabama. Forrest set a season-high in the win, shooting 10-of-17 from the floor and 9-of-10 from the charity stripe. It was Forrest’s only 30-point game of the season, but was the fifth of his career.

No. 6: Williams ties program record with 10 made threes

Although App State ultimately fell 78-70 in their second matchup of the season with South Alabama, O’Showen Williams caught fire from behind the arc. He finished with a career-high 32 points and hit 10-of-20 threes in the game, tying the program record for most threes in a game. The program’s second leading scorer of all time, Ronshad Shabazz, was the last Mountaineer to knock down 10 threes in a game, in 2018-19 vs. UL-Monroe.

With 12 seconds left in the game and the Mountaineers trailing 72-69, Forrest knocked down a game-tying three-pointer that would ultimately force overtime. App State outscored the Red Wolves 11-8 in the extra period to secure the 83-80 victory. Five Mountaineers reached double-digit scoring in the contest and Forrest led the way with 20 points. Williams also recorded the first double-double of his career with 14 points and 10 rebounds.

The Mountaineers came from down by 10 in the second half to beat the Eagles in Statesboro and secure a sweep of the season series. Delph led the way with a team-high 21 points and Johnson recorded a double-double with 17 points and 12 boards. Johnson dunked home the 1,000th point of his career early in the second half.

No. 3: Mountaineers come from down 15 at halftime to knock off Coastal Carolina in Sun Belt Tourney

Forrest hit his third clutch three-pointer of the season with 18.5 seconds left in the game to complete the Mountaineers’ 18-point comeback 60-57 win over Texas State at the Holmes Center. “He’s not afraid of the big moment,” head coach Dustin Kerns said. “Some kids don’t want the ball in their hands at that moment, but he does. It was another big shot.” Williams led App State with 19 points while Forrest scored 14 points and recorded a career-high seven assists.

No. 1: Justin Forrest’s last-second game-winning three vs. Georgia Southern in the Holmes Center

With the Mountaineers trailing 72-71, Forrest had the ball in his hands on the final possession. He nailed a deep stepback three from the top of the key with 0.9 seconds left in the game to lift App State past its biggest rival 74-72 in front of its home crowd. The Eagles led 39-29 at halftime, but 25 points from Forrest and 20 from Williams lifted the Mountaineers to the comeback victory.