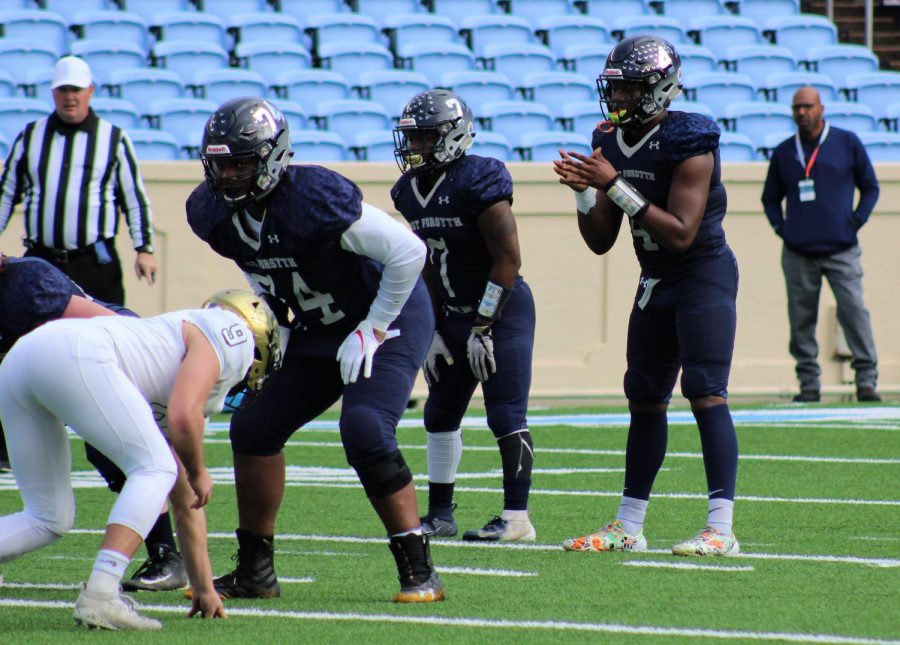 Jaden Lindsay, a senior offensive guard at East Forsyth High School in Kernersville, committed to the Mountaineers back in May. The 6-foot-3, 270-pound lineman plans to graduate early and join the Mountaineers for spring practice.

Lindsay is the highest-ranked recruit in App State history according to 247Sports, and will be joining an offensive line group known for its success. The Mountaineers’ offensive line this year includes four Preseason All-Sun Belt players. Three of those players are seniors, including offensive guard Baer Hunter, who plays the same position as Lindsay.

“I’m getting everything down packed so when I get up there, I can show the coaches I’m ready to go,” Lindsay said. “Replacing a guy like Baer Hunter, it’s gonna be hard, but I’m gonna do everything I can to help App State in every way possible.”

Offensive guard isn’t the only position Jaden has played during his career. He’s spent time playing all O-line spots, except for center, during his high school career.

“He’s played guard, he’s played tackle, he hasn’t played center, but I think he will be able to fit in at any of those spots and not be lost,” East Forsyth head coach Todd Willert said. “He can step in at a lot of different positions up at App State.”

During his high school career, Lindsay grew accustomed to winning. He started on the offensive line during both the 2018 and 2019 seasons, when East Forsyth won 4A state championships in back-to-back years.

“His sophomore year, we brought him up in the playoffs and he ended up starting for us at right tackle and took over a senior’s spot. He was a major reason we won our first one,” Willert said. “We just felt so confident and then his junior year we moved him to left tackle and there’s no doubt he’s a huge reason why.”

Willert said Lindsay is known for his aggressive play on the field, but he has a softer personality off the field.

“Jaden is just an S.O.B. out there on the field, but then when he’s off the field, he’s a big teddy bear,” Willert said. “He makes you laugh and smile all the time and that’s what it is. He’s one of those kids who can turn it on and off.”

“Coach Cardwell, he was just there for me and my family. He was constantly checking up on us, checking up on my mom, my dad, and even my brothers,” Lindsay said.

Mountaineers head coach Shawn Clark played offensive guard at App State during his career and was an offensive line coach for 16 years. This gave Lindsay confidence that he’d be in great hands from the moment he stepped on campus.

“To have a head coach that works with the O-line proves that that group, me especially, means that it’s an important part of football to them,” Lindsay said.

Lindsay will join the team in January and said the App State community has already made a large impact on him and influenced his decision.

“A community backing up a school, it’s just a beautiful sight. I won’t have to go there and worry about anything bad happening,” Lindsay said. “If I need anything, just to know I have a community there to rely on and help me.”