Touchdowns not a problem for Burns 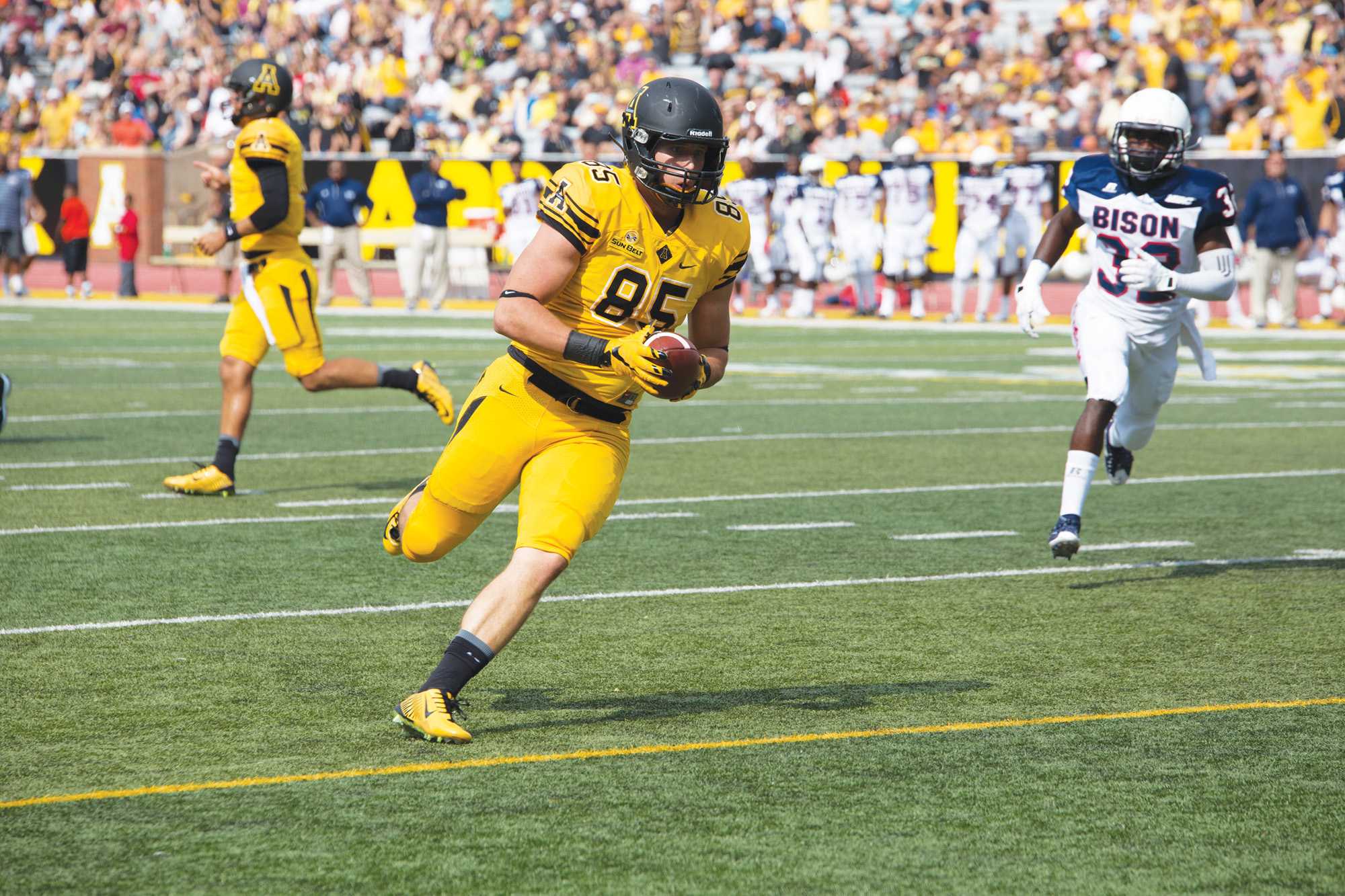 Junior tight end Barrett Burns crosses into the end zone to score against Howard during the first home game of the 2015-16 season on Sept 5. Photo by Chris Deverell.

Scoring touchdowns is any football player’s dream. For junior tight end Barrett Burns from Woodstock, Georgia, scoring touchdowns seems to be all he does. Burns is leading the Mountaineer receivers this season with six touchdowns in 2015-16, despite only notching three touchdowns combined during his previous two seasons.

Before last week’s game against Louisiana-Lafayette, Burns had scored a touchdown in four straight games, hauling in a 33-yarder against Georgia Southern and a 29-yarder against Arkansas State.

The more incredible part about Burns’ touchdown-mania is that he only has 12 total receptions on the season, averaging roughly one a game. But he’s also contributed to the team with improved blocking schemes, which helps the teams strong run game.

“We earn our keep by running the football first so we know priority-wise, as a tight end, that we have to block first.” First-year tight end coach Taylor Cornett said. “That opens up the field for us and we take pride in that. We work every day on blocking to get our tight ends open.”

Burns had to adjust to a new quarterback at the beginning of last season when sophomore quarterback Taylor Lamb was thrown into the starting role and he feels like their offseason training together has helped build strong chemistry.

“Throwing in the offseason and the summer has really helped us whenever we have time off,” Burns said. “He lives right next to me so I have been able to get to know him more and that helps our chemistry.”

With a game remaining in the regular season, and a bowl game looming, Burns is working his way into the record books. Former Mountaineer tight end Daniel Bettis holds the tight end record for most touchdowns in a season with eight, and Daniel Wilcox, a former Baltimore Raven, is behind him with seven.

One of Burns’ biggest skills is his experience at the tight end position, which helps him create open looks. Taylor Lamb feels he has all the skills you can ask for from a tight end.

“There is a technique to being a good tight end with blocking and route running that he has all of it,” Lamb said.

Many of Burns’ touchdown catches are very similar, 1-yard routes, but it seems teams still haven’t been able to stop him. Part of that is because of his ability to slip out when blocking for the run game.

“We are utilizing his persona group. He’s the guy that has been in our blocking scheme and we try to slip him out,” head coach Scott Satterfield said. “It just so happens when we slip him out, there is nobody else there.”

“He is a big body and a big target,” Lamb said. “If you slip him out of the secondary you get a good matchup size wise. Sometimes guys expect tight ends to come up and block them but he can slip right by.”

Just two seasons ago, Burns was named a freshman All-American by college sports journal and freshman all-Southern Conference by the league’s coaches. Progressing slowly but surely from then, his experience now places him as one of App State’s most lethal weapons.

“He has become much more consistent blocking and more physical,” Cornett said. “He has gotten better understanding what we do offensively. With reps and experience, you get better at that.”

As an Atlanta native, he wouldn’t compare himself to any NFL tight end, but said he’s looked up to one Hall of Famer most of his career.

“I wouldn’t compare myself to anybody, but Tony Gonzalez is who I have always looked up too,” Burns said. “As an Atlanta fan, he has always been my favorite to watch and learn from.”

With one regular season game remaining and a bowl game left on the table, Burns hopes his season track-record of scoring touchdowns will continue and Lamb will make sure that happens.

“He is a guy we want to get the ball to in any way possible,” Lamb said.