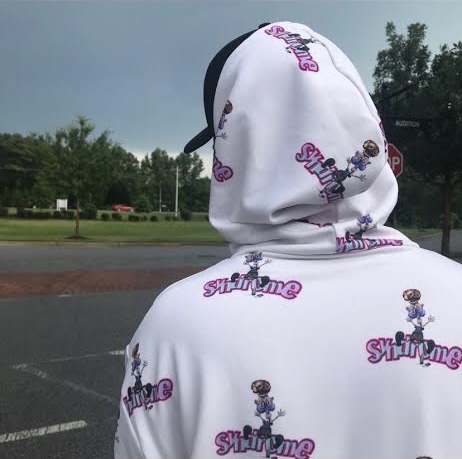 Casey Pile in a Syndrome sweatshirt. Pile, an App State student, and his friend Lucas Harmon created the clothing brand Syndrome in June 2019. The pair run the business from different states.

The distance from Boone to Savannah, Georgia has not stopped two innovative fashion students and their up-and-coming clothing brand.

App State student Casey Pile and friend Lucas Harmon, a student at Savannah College of Art and Design, are redefining fashion with their brand Syndrome.

Although their ultimate goal is an art collective –– a project with collaborative efforts from multiple different artists–– right now, Syndrome is, at its base: clothing. Syndrome has had a wide range of products, from shorts to backpacks, that displays Pile’s vibrant and eye catching digital art paired with Harmon’s unique and expressive cartoons.

Pile and Harmon started Syndrome a little over a year ago, dating back to around June 2019, when the two sold clothes out of Pile’s bonus room. Business was booming, Pile said, and that was when the two knew they had to keep doing it.

Pile and Harmon believe that Syndrome stands out against other companies because of how personal it is. Instead of simply just putting a name on a shirt like other brands do, Syndrome is a representation of their artistic styles; Harmon’s cartoons are branded on the center of many of Syndrome’s clothes, and Pile has found various ways to implement his digital art into the brand’s products.

Though business is a little different now because of the pandemic, Syndrome has gathered local support in Boone, along with a manufacturer, website and social media presence that has helped them stay steady in business.

Despite the insecurity that a pandemic can bring to businesses like Syndrome who did the majority of their sales in person, Pile and Harmon’s dedication to Syndrome has not faded.

“I care so much about it that it’s impossible for me to take my mind off of it,” Pile said.

Even during class, Pile is busy making designs and planning out new clothing ideas. Aside from Syndrome, Pile also makes clothes, cutting and sewing pieces from scratch.

Pile believes Syndrome stands out from other streetwear brands that get by on mediocre products with a lack of concept. He hopes to change fashion by creating a brand where people could see things from Pile and Harmon’s perspective.

Instead of simply displaying a brand name on a shirt, a common tactic for many other streetwear brands, Syndrome’s products display artwork and design that is personal, especially to Pile and Harmon.

“It’s the only thing I’ve actually wanted to do with my life,” Pile said.

Pile and Harmon have been friends for almost a decade and have been through “everything imaginable” together, Harmon wrote in an email.

“We’d be skating every day talking about how cool it would be to have our own clothing company that was like all the ones we’d look at online wishing we had,” Harmon said.

Harmon, who is from the Raleigh area, has turned to art as a way to communicate how he feels and what he is going through in life in the form of cartoons, he said.

“My family still has sketchbooks from when I would pause the TV as a kid to draw my favorite cartoon characters,” Harmon said.

Pile began painting a little over a year ago and was trying to paint on shirts as a hustle, Harmon said. Harmon had worked in a T-shirt shop when he was younger and had been continuing it as a side hustle, so it was a perfect match for a business.

“We talked about it since we were young,” Pile said. “We decided to just start it and run with it.”

Ultimately, the two artists want Syndrome to be exclusive and a competitor to top brands like Supreme.

“We have always stood out,” Pile said. “I feel like we always knew that we would end up doing something like this, that we are paving our own way.”