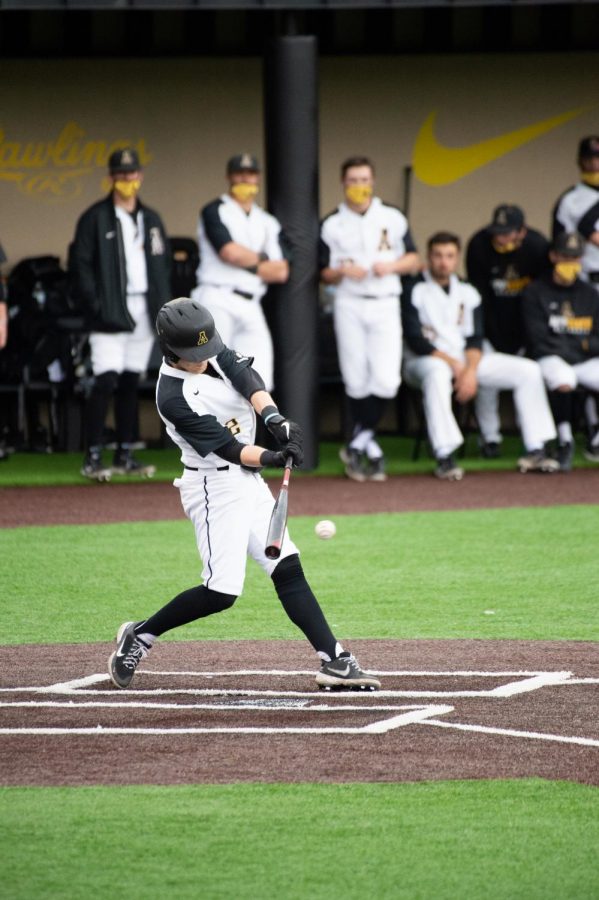 App State junior Andrew Terrell is a key piece of the Mountaineers' baseball team, but he contributes in a rare way: both as a position player and a pitcher. Terrell currently has a 5.40 ERA with 13 strikeouts through 8.1 innings on the mound and has a .222 batting average at the plate.

For two seasons, App State baseball’s Andrew Terrell has been playing one side of the ball fielding at third, in the outfield and batting. Terrell never stopped playing despite battling shoulder problems throughout the years. Now a junior, he’s finally taking steps back towards  where he began his baseball journey, playing both sides of the game.

“He’s able to hit for average and then get on the mound for some quality innings. It’s very impressive,” senior outfielder Kendall McGowan said. “His ability to get on base and move around the bases. He’s able to get us going and cause an offensive spark when trying to get runs.”

In high school, Terrell was named All-Western North Carolina as a senior, a two-time all-conference performer, and named team MVP for baseball and basketball as a senior. He batted .378 and struck out only once in 95 plate appearances as a senior. However, it wasn’t just Terrell’s batting abilities which caught the eyes of the App State coaching staff, but also his pitching abilities.

“I’ve been doing it since I was even able to play baseball,” Terrell said. “My family has been a big part of this journey.”

As a freshman at App State, Terrell played in the infield in 19 games with four starts while dealing with some injuries, sidelining him for multiple games. In his first season, he batted .125 with three hits, five RBIs, and four runs scored.

Terrell rebounded his sophomore year, playing in eight games, making six starts before the season was cut due to the pandemic. He finished batting .143, with six runs scored, four RBIs, six walks, three stolen bases, and a .321 on base percentage.

“It’s not something Andrew could ease into, we just threw him into the fire in year three.” pitching coach Justin Aspegren said. “His effect on the game is when he pitches, the guys are excited to play behind him, when Andrew’s on the mound. They know something cool is going to happen.”

Now a junior, Terrell is getting his shot as a two-way player. So far this season, he’s seen not just more playing in the field, making 30 appearances so far, but also got on the mound six times this season. Getting his first call to the mound in the North Carolina A&T series, Terrell had a multi-inning win, giving up just one hit and five strikeouts. So far in six appearances, Terrell has pitched 8.1 innings with 13 strikeouts and a 5.40 ERA.

“He doesn’t spend much time with me, which makes his pitching side really impressive,” Aspegren said. “He participates in our outfield throwing program and spends 99% of his time with the position players.”

Alongside his pitching success, Terrell has found success in the batters box, hitting .222 with 16 runs, nine RBIs, 13 walks, and a team-high seven stolen bases. On the fielding side, Terrell has been reliable with 32 catches, 26 putouts, six assists and zero errors.

Nearing the end of the regular season, Andrew has been nominated for the Olerud award by the NCAA. The award, formally known as the John Olerud Two-Way Player of the Year, is awarded annually to the nation’s best two-way player.

“Andrew’s versatility is huge for our team,” head coach Kermit Smith. “The thing that is overlooked is how hard it is to be a two-way player, then throw on top of that he plays in the infield and outfield. It’s a huge commitment to balance being good at all of those areas.”

Terrell acknowledged that while difficult, being a two-way player is just part of being a good teammate.

“It’s not an easy job being a two-way player, but I’m always making sure I’m ready to go when my name is called,” Terrell said.