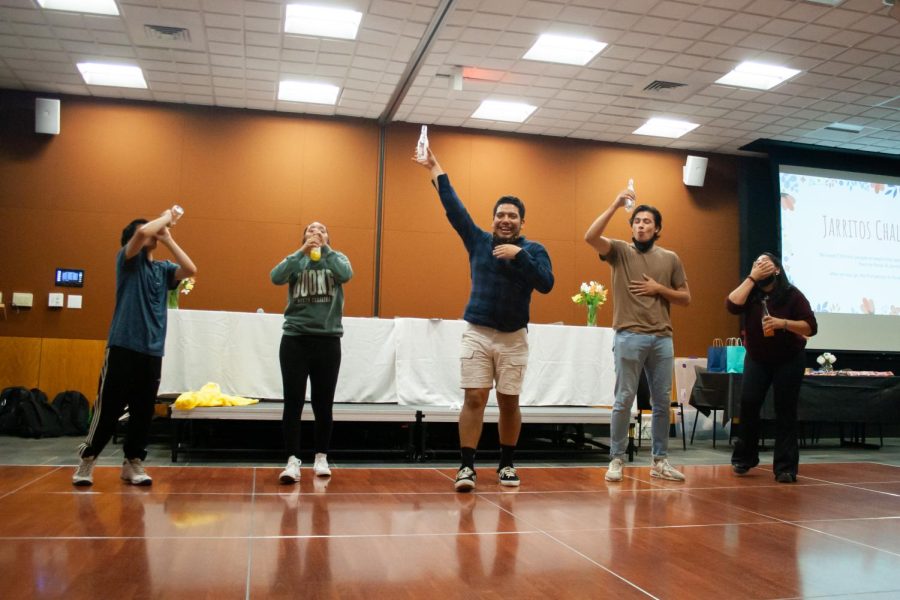 During the event, competitions like a Jarritos drinking game were held to celebrate Latino and Hispanic culture in a creative way.

Brenda Valdez, president of LHA said the purpose of the festival is for members of the Latin Hispanic community to come together to celebrate their culture, identities and roots. It is also an opportunity for those who don’t identify as Hispanic to learn and appreciate the cultures.

Valdez said the festival has “been going on way before I was here,” and that the organization wanted to continue this tradition.

The festival fell during National Hispanic Heritage Month which is Sept. 15 to Oct. 15.

“We may only have this designated month, but that’s not the only time we’re gonna celebrate. During this month we’re going to go all out,” Valdez said.

Valdez said LHA has been planning this event since the summer.

The festival, attended by roughly 150 people, celebrated Hispanic culture through food, guest speakers and games. Students embraced and shared their heritage and culture with others through this opportunity.

“It provides a sense of comfort and a sense of my identity being acknowledged, and I love that it’s not only acknowledged but celebrated,” said Berenice Blanco, senior elementary education major.

The event began with a panel of six Hispanic scholars from the community discussing their journeys in education and family, where and how to build relationships, and how to overcome the struggles of being in a predominately white institution.

Only 8% of App State students are of Latin/Hispanic descent according to App State’s office of Institutional Research, Assessment, and Planning.

“You have to carry the weight of all of your people in a predominantly white school,” said Jose Cisneros-Tirado, a panelist at the event.

Carlos Montero is an alumnus and professor at App State. The Emmy Award-winning news anchor of CNN En Español discussed opportunities in journalism for members of the Latin Hispanic community on campus, such as Buenos Días Boone, Boone’s only news show for Spanish speakers.

“Life is crazy because life surprises you, and I know life is going to surprise you guys very soon.”
Panelist @CarlosLecturer shares advice and talks about his journey to higher education at the Latin Hispanic Heritage Festival. pic.twitter.com/KQGFO1sCmo

After the panel discussion, guests volunteered to participate in games such as musical chairs, Hispanic heritage trivia, a Jalapeño eating contest and a Jarritos drinking game in which participants chugged the Mexican soda.

Guests danced to music by popular Hispanic artists such as Bad Bunny, Romeo Santos, and Pitbull, concluding the celebratory night.

“Just having that touch of my culture while I’m at school is very important to me,” said Vanesa Flores-Sanchez, a sophomore supply-chain management major.

One thing members of the LHA board and the panelists want attendees to take away from this event is to be proud and embrace their culture, identities and accomplishments.