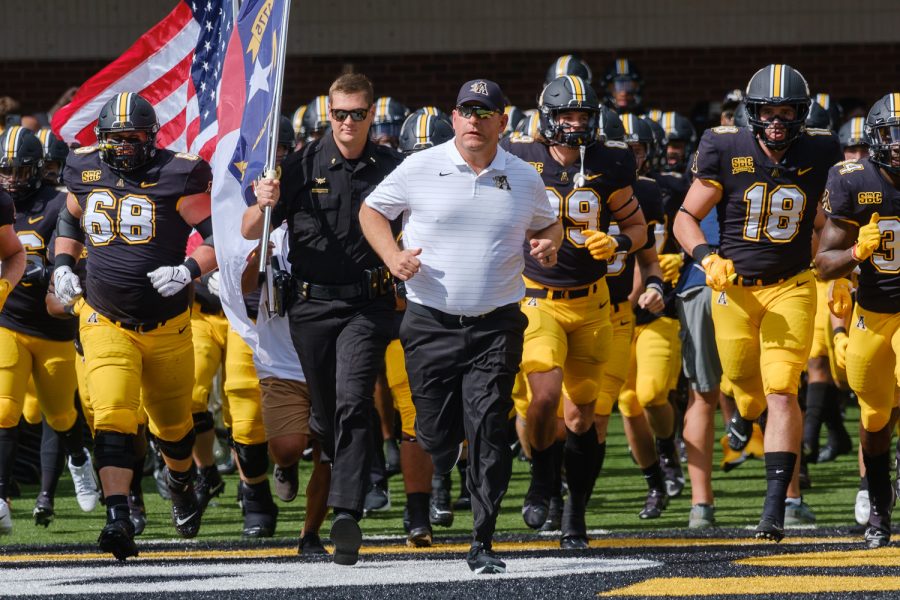 Shawn Clark leads his team out of the new north end zone facility for the first time in App State's home-opening matchup with Elon. The Mountaineers went on to throttle the Phoenix 44-10, moving to 2-1 on the season.

After a tune-up win against the Elon Phoenix Saturday, the Mountaineers have a quick turnaround to play Marshall, a team that gave App State one of its three losses in 2020. The Thundering Herd are coming off of a tough loss against East Carolina, where they held an 18-point lead in the second half and watched it crumble in the waning moments.

For the Mountaineers, this is the first of the three potential revenge games after losing to Marshall on the road during the 2020 season. App State only scored seven points in that matchup, and there is a long list of players on this year’s team that still have that game in their memory. This is a storied rivalry with the Thundering Herd, going back to when they played in the Southern Conference during the 2000s.

“We’ve put our thoughts and game plans towards Marshall for a big game here on Thursday evening on ESPN, a chance to put our program on the national stage, and we’re very excited for that,” App State head coach Shawn Clark said. “It’s an old-time rivalry in the Southern Conference. Both teams have great history, and we’re looking forward to it.”

Marshall quarterback Grant Wells is fourth in all of college football in passing yards with 1,110 through three games. For a second-year quarterback, the yards are well above the average, but the Thundering Herd have struggled to score through the air, totaling more interceptions than touchdowns. Going against an App State defense that gives up less than 20 points per game, Wells will have his hands full attacking the Mountaineer secondary.

In last year’s matchup, App State was held to 96 yards on the ground, totaling a measly 2.9 yards per carry. The silver lining? Junior running back Cam Peoples averaged 4.8 yards per carry that night, and he should be the focus of the offense on a cold night at Kidd Brewer Stadium.

“We have to go back and fix what we did last year, and that was turning the football over and not scoring in the red zone,” Clark said. “This is a big-time football game and something we’re excited about. We need all of App Nation to be there on Thursday evening.”

App State had a sold-out crowd last week, and even a Thursday night is expecting a packed house again. After last year, the thought of evening the score with Marshall in front of a home crowd could spark a big win before App State moves into conference play.