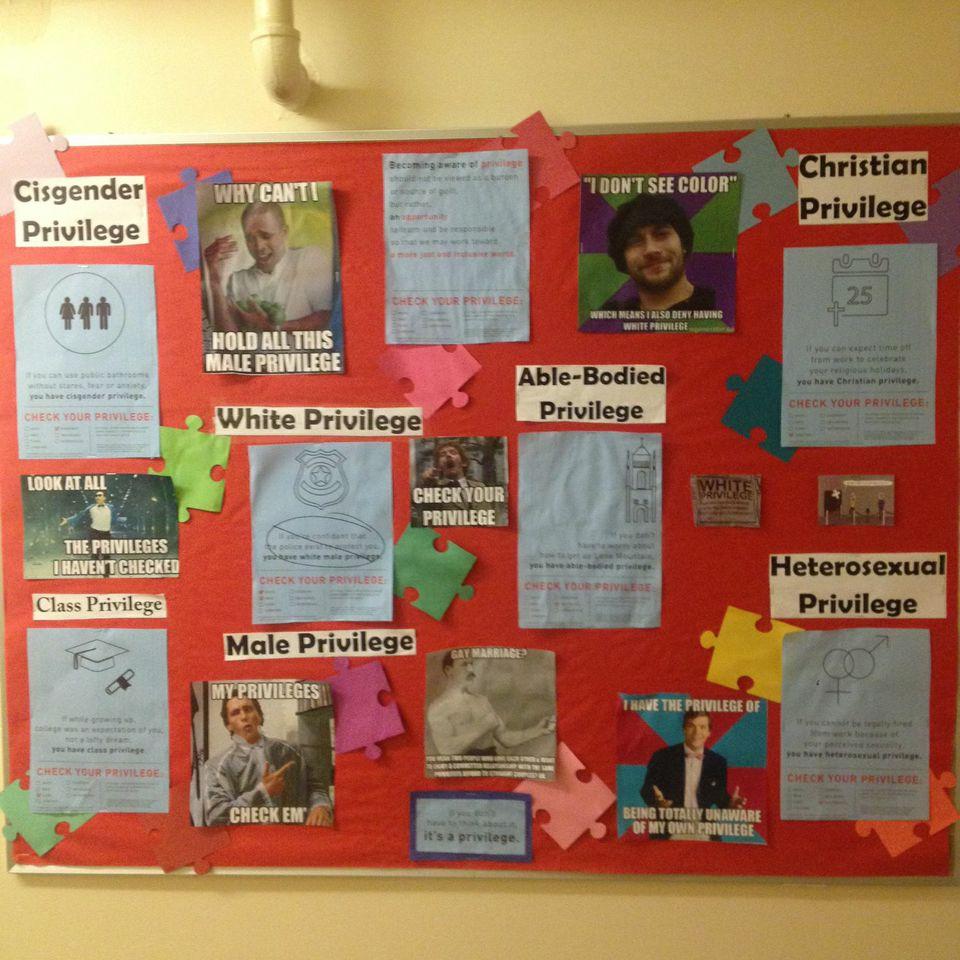 University Housing said they will not take down a bulletin board posted in East  Residence Hall by a resident assistant, despite a continuing amount of controversy and concern on campus.

Reginald Gravely, a resident assistant on the second floor of East Hall, made a bulletin board on his hall that encouraged students to “Check Your Privilege.” The board discussed cisgender, white, male, able-bodied, Christian and heterosexual privilege, which gained media attention last week in the publications Campus Reform and Young Conservatives.

According to University Housing, the board is factual and accurate and therefore has not been taken down.

“There are many purposes of bulletin boards in residence halls: educational, informative and some will be fun,” said Vickie Hawkins, associate director of University Housing-Residence Life. “We do not have any evidence that the RA designed this bulletin board for any other reason than to educate residents.”

Hawkins said Residence Life staff are educated on the topic of diversity, social justice and privilege, and that staff is prepared to facilitate and process those conversations.

However, for others, the conversation has sparked even more concern. On the Appalachian Social Justice

Educators Facebook page, admins warned students of color against going anywhere alone as a result of the anger surrounding the bulletin board.

Mary Lyons, president of ASJE and senior art education and nonprofit management major, said that ASJE members heard and saw things that caused them to create the post.

“I don’t feel personally attacked,” Lyons said. “But on a day-to-day basis I am seen as an outsider and an intruder.”

Laurel Littler, junior commercial photography major, who spoke to Campus Reform about the board, has received negative feedback from strangers via Facebook. She said words have been put in her mouth, and she does not believe in some of the things she is quoted as saying.

“I saw one [comment] that rattled my cage a little bit,” Littler said. “It said, ‘This white girl deserves all of the cyberbullying because she’s white and has never experienced oppression.’”

Littler said that while it it has been a “living hell” for her, she has learned a lot from the experience.

“It’s taught me a lot of things,” Littler said. “If that is how minorities are treated…it’s just very sad to me that it took an excessive amount of cyberbullying to get an idea of that.”

Littler said she wished the board itself had taught her the lesson, rather than the cyberbullying that came from it. She believes that in order to successfully learn about each other’s differences, students must first learn what makes them similar.

An anonymous East Hall resident posted an open letter and poster board below the original bulletin board shortly after the controversy started. The letter addressed the privilege bulletin board and encouraged students to love everybody. The letter states, “oppressing the majority is still oppression.”

Surrounding the letter were post-it notes stating “Why I love ____” followed by each of the groups labeled on the privilege board.

Lyons said complaints about the presentation of the board, rather than the content, are a deflection from the issue at hand.

Lyons said it’s disheartening that more people aren’t willing to have a conversation about privilege.

“It’s kind of ironic that people are clamoring to say how much they understand privilege,” Lyons said. “Yet they don’t want to talk about it or have any reminder that it is a relevant topic of conversation.”