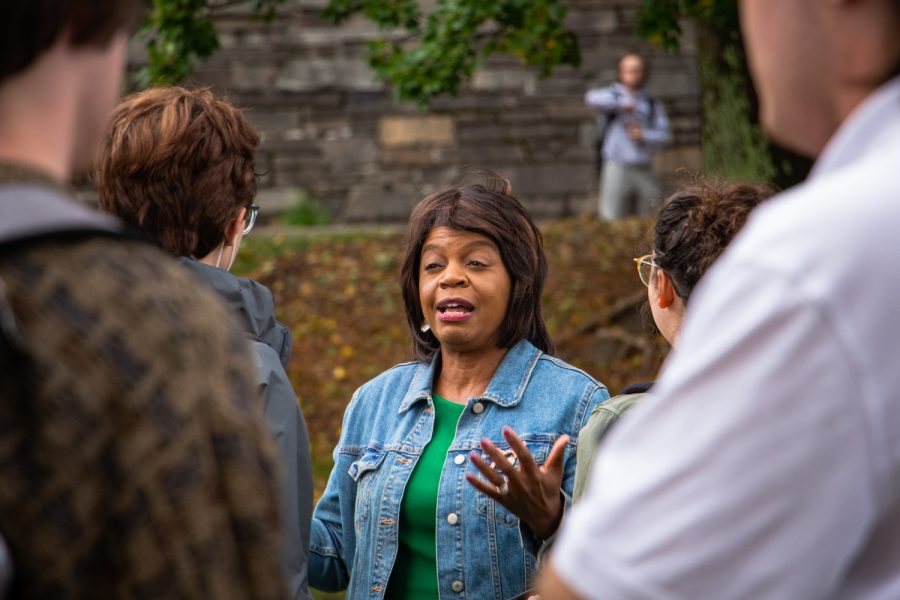 Beasley served as an associate justice on the North Carolina Supreme Court from 2012 until 2019 when she was appointed Chief Justice, but lost a reelection campaign in 2020. Beasley was the first Black chief justice of the court.

“We’re all over North Carolina,” Beasley said. “We’ve had over 80 events across this great state really talking to people about the things they care about, and so we will leave no stone unturned, and that really is our strategy.”

Beasley said she wants to use her campaign to raise awareness and make change on issues such as voting rights, climate change and child care. If elected, Beasley would be the first Black woman elected to the U.S. Senate from North Carolina.

“We were challenged before the pandemic, and so many of us remain challenged during this pandemic,” Beasley said. “Mission Hospitals in many counties, seven of which in Western North Carolina, don’t have access to primary care physicians.”

When it comes to voting rights, Beasley said if elected, she would work to pass the John Lewis Voting Rights Act and the For The People Act. These proposed bills would require state governments to pre-approve certain changes to their voting laws with the federal government, as well as expand voting rights, ban partisan gerrymandering and change campaign finance laws to reduce the influence of money in politics, respectively.

Beasley also spoke on childcare and the economy, explaining the lack of adequate staffing seen across the country is due to a lack of childcare services.

“When you go to the grocery store or a restaurant, and you see they don’t have workers, it’s because they don’t have childcare,” Beasley said. “And they didn’t qualify for PPP or federal assistance, and businesses had to shut down.”

The Paycheck Protection Program was a measure to ensure the safety of small businesses during the COVID-19 pandemic through a loan service program that would keep the workforce of a small business employed. This measure ended May 31.

The group of about 30 students and locals in attendance weighed their options for the upcoming senatorial race.

“I’m a first-time voter this year,” said freshman Daniel Shedrick. “I want to make sure I understand each candidate that is running and really do my research to be an informed voter in this extremely important race.”

Beasley also spoke about mental health and its importance during the pandemic.

“Mental health is health,” Beasley said. “As Chief Justice, it was really important for me to expand our substance misuse courts and focus on treatment and not punishment.”

After explaining her policy, Beasley opened the floor for questions and took comments from attendees. Beasley later spoke with students individually and took pictures.

Beasley continues her college campus tour across the state as she gears up for the Democratic Senate primary in March.

“As I’m traveling across the state,” Beasley said, “ I’m hearing from people like you who care about things that mean so much to people in this state, and I want to know about them because we have got to get this right.”