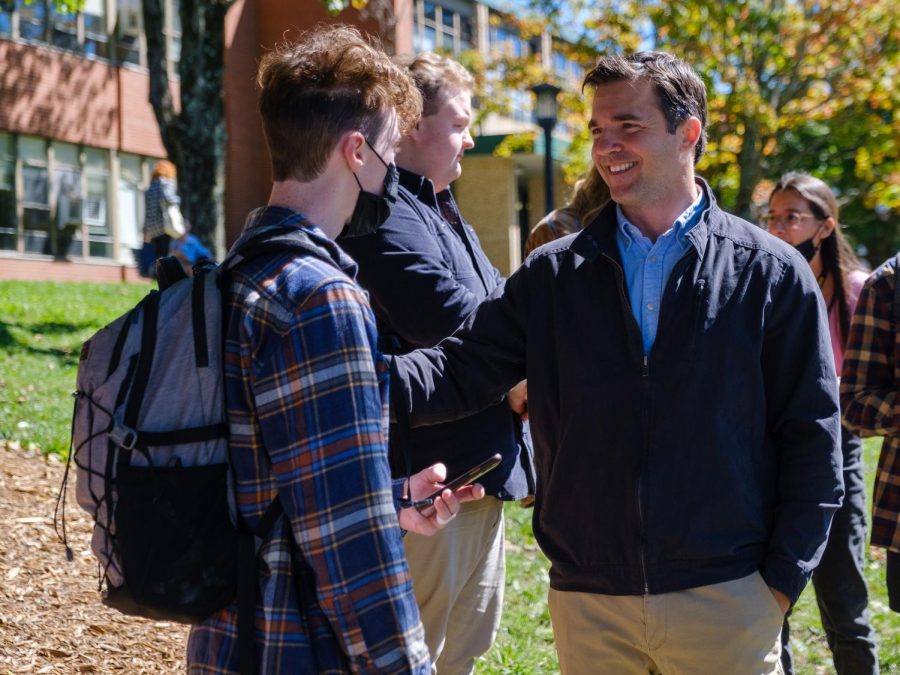 Senatorial candidate Jeff Jackson spoke one-on-one with people on campus before giving a speech and answering questions from students.

Rather than order lunch from the food trucks or hammock between classes, App State students joined senatorial candidate Jeff Jackson on Sanford Mall Friday to discuss his aspirations for North Carolina.

Jackson, who has represented North Carolina’s 37th district in the state Senate since 2014, is running for United States Senate in the upcoming midterm election in November.

“I grew up in Chapel Hill, and the joke was people who go to App never come back because this is just gorgeous,” Jackson said.

Jackson said he wants to use this campaign to raise people’s expectations about what they deserve from a senator. If elected, Jackson would be the second youngest US Senator so he is visiting 20 North Carolina colleges to connect with young voters.

“Part of what they should expect is that he or she actually shows up to listen to people,” Jackson said. “People of this campus want to interact with the U.S. Senators, so they should be given that opportunity.”

When it comes to student debt, Jackson said if elected, he would support the College Affordability Act. The act would lower the cost of college for students and families, increase debt-free options and increase Federal Pell Grants.

“I know there are a lot of future teachers at App State,” Jackson said. “One of the major programs that is there for them, but isn’t really, is the PSLF and fixing that would be a huge deal.”

Public Service Loan Forgiveness is a program that allows employees of public service a way out of student loan debt.

Jackson also touched the economy. He said the quickest way to boost the economy is to encourage more people to be vaccinated and wear a mask.

“We’re still in the middle of a pandemic,” Jackson said. “We’re kidding ourselves if we think there’s any quick trip way out of this if that doesn’t involve more people being vaccinated.”

While Jackson is running as a Democrat, the crowd wasn’t just Democratic students.

River Colins, the president of App State College Republicans, said he came because he’s interested in hearing what other candidates are pushing, rather than just listening to one side.

Dalton George, a current Boone Town Council member who is running in November to keep his seat, said he was excited to see App State receive the credit it finally deserves.

“It’s still super cool just to have somebody invest in young voters,” George said. “There needs to be a dialogue, not doing things traditionally.”

While the crowd of around 100 students stood and listened to Jackson speak, he said he wanted to leave plenty of time for people to ask questions and comment on anything.

After Jackson answered several questions, he allowed students to talk to him individually. Several students stopped to take photos with the candidate as well.

Jackson said some of the students who attended the event are most likely going to run for office one day.

“You don’t want to have to cram to learn what people care about when you start running for office,” Jackson said. “You want to have built a real knowledge base, and reading a local newspaper is an inexpensive and relatively simple way to build that knowledge.”