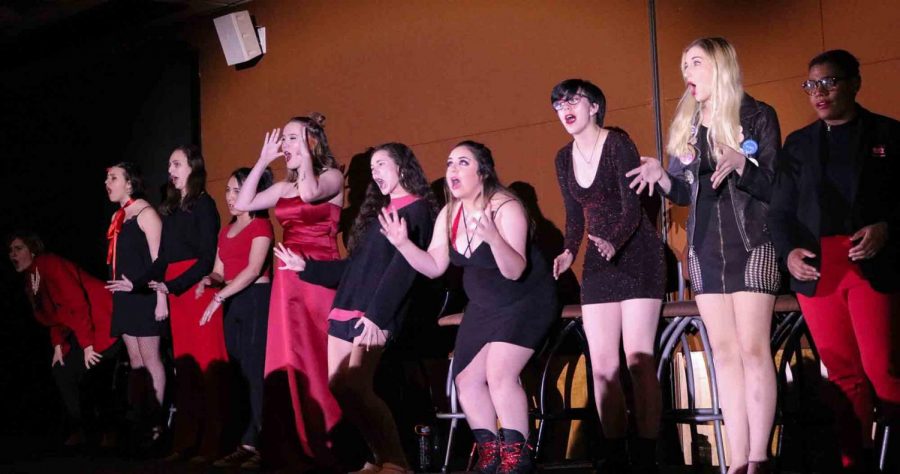 This year's Vagina Monoogues performers line up on stage. The monologues are the Women’s Center’s largest event, created to shine a light on issues that women around the world face, and to raise money for local charities, such as Oasis.

Tackling genital mutilation in Bosnia, pubic hair, the gift of birth and the experiences of being transgender, “The Vagina Monologues” is produced annually by the Women’s Center. Created in 1995 by Eve Ensler in the hopes of exposing women’s experiences across age, sexuality and race, the episodic play has raised money for women’s right since it started.

“(The play) brings global awareness of things that are happening on a daily basis that we don’t really think about, especially stuff that is happening in other countries. It gives you a perspective of what’s occurring around us,” the Women’s Center graduate assistant Hannah Elicker said.

From the money the Women’s Center gets from ticket sales for the play, 10 percent goes to Ensler’s V-Day Campaign, an international campaign which promotes an end to women’s violence. Ninety percent of the funds goes to the local nonprofit organization Opposing Abuse with Service, Information and Shelter, or OASIS.

In 2018, the Women’s Center said “The Vagina Monologues” raised around $8,000. Outreach Coordinator for OASIS Sara Crouch said the organization, based on influx of how much the monologues raise, usually receives over $4,000 annually.

Offering support to anyone regardless of gender identity, race, sexuality or immigration status, OASIS has services for those who have been or are victims of sexual or domestic assault. OASIS works for Watauga and Avery counties to provide emergency services, hotlines, shelters, resources and education for those in the community.

“It’s really important that we raise awareness and end the stigmas surrounding domestic abuse so more people can come forward and get the help they need,” Crouch said. “Without the collaboration, raising awareness would be difficult.”

OASIS works based on the “empowerment model,” meaning that instead of forcing its clients to live under the organization’s wings, OASIS gives them the services to help them better themselves. Over the 2017-2018 fiscal year, OASIS provided services for 596 clients, including 274 children, Crouch said.

The Women’s Center is a referral system for students who need resources from OASIS and acts as a community and educational system for those on campus.

At the beginning of each showing of “The Vagina Monologues,” an OASIS representative has thanked the crowd for their support and talked about the organization’s cause.

“Even though we have been in the community for 41 years now, there are still some people—especially new students or people who have never thought about these issues—who don’t know that OASIS exists. It’s important to know that we exist if they ever need us. So it’s really important to have that platform in a space that feels really safe like ‘The Vagina Monologues,’” Crouch said.