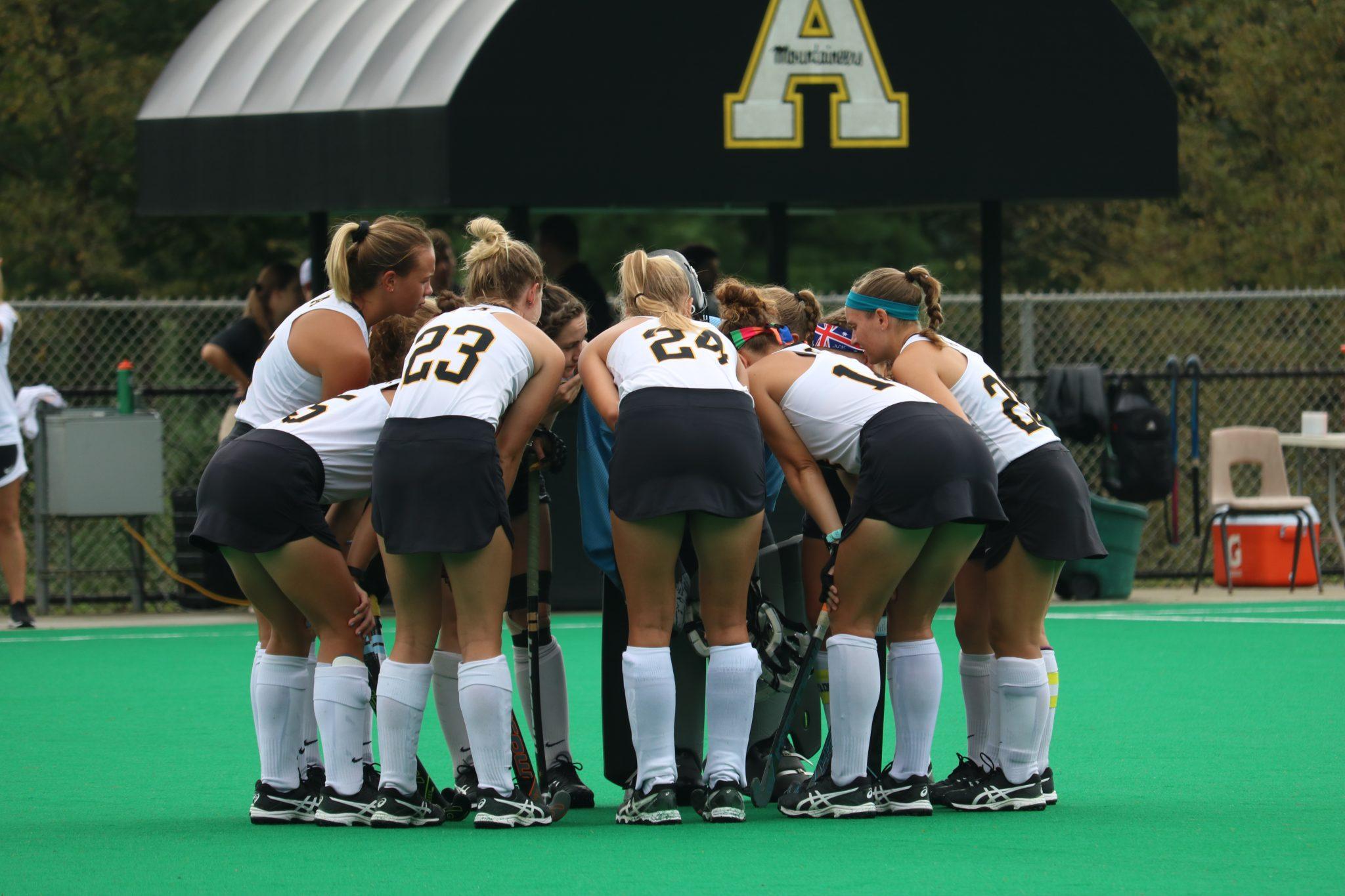 Field hockey huddles up during their home game against Louisville.

With no professional league or national sports network, field hockey is less popular and harder to follow than other sports. It has a much bigger following in other parts of the U.S. and overseas, but in the High Country, most people don’t grow up loving field hockey. In fact, only four of the 27 field hockey players listed on App State’s roster are from North Carolina.

The program showed drastic improvement between the 2016 (1-15 overall) and 2017 (8-11 overall) seasons and looks to continue that trend again this year. After starting the season by winning four of its first five games, the team has struggled as of late, falling in its last seven.

In September, the team faced off against three top-10 ranked programs, including North Carolina, who was No. 1 in the nation, Louisville, who was No. 7 and Duke, who was No. 4. Although App State fell in each contest, the experience from those games will help them down the stretch.

“The really positive note is that we are constantly engaged in every game, we’re constantly fighting and so our losses are getting smaller and smaller, which I think is a sign of the program getting better,” head coach Megan Dawson said. “Playing a team like Louisville helps you for those conference games, it pushes the tempo, it really raises our level and I think that’s been really good for our program to see the growth in those games.”

Sophomore midfielder Veerle Van Heertum leads the team in total points with 19 and goals with eight. Midfielders, junior Ali Williams and freshman Fredi Stegan are tied for second with five apiece. Van Heertum, the star out of Valkenswaard, Netherlands, has been impressive this year and only looks to get better.

Her coaches aren’t the only ones praising her, as her teammates also recognize what she brings to the table.

“I think it’s her intensity that makes a difference in our team,” Williams said. “She is always fighting for the win. She never gives up.”

What makes Van Heertum’s success even more impressive is that this is only her second year in the U.S. playing a different style of field hockey than is played back home in the Netherlands. She said the styles of play are different, and she had to get used to it.

“Back home everything is so different. Speed, ball speed, conditioning is really tough here, but my teammates are helping a lot,” Van Heertum said. “Here it’s more physical, and back home it’s more skilled, so I’m pretty skilled, but on the physical part, I’m struggling. I think it’s a great contrast.”

Williams is third on the team with 11 total points, along with tying for second in goals with Stegan. Williams, a Myersville, MD product from Middletown High School and Van Heertum have a special chemistry that allows both to find the back of the net.

“I think right now we’re at a place where we know what works well,” Williams said. “We just use that to our advantage.”

The Brandon and Erica M. Adcock Field Hockey Complex opened of an all-new fieldhouse at the start of this year. The turf at the complex is state-of-the-art and the addition of the fieldhouse illustrates how far the program has come in a short time.

Williams said the upgrade of facilities has helped the team’s attitude.

“It’s so awesome. We started out with literally nothing, so it’s really great to have a place we can put all of our stuff,” Williams said.

2018 marks the 50th year of women’s sports at App State, and there has been a campus-wide celebration going on throughout the year. Field hockey celebrated the 50th anniversary on Sept. 23 when they hosted Louisville, putting on a halftime ceremony to honor former players.

“We’ve had a lot of great alumni now that have paved the way for these student-athletes to work harder and to give more and to have more, so I think that’s a really cool sign,” Dawson said.

The alumni from the very first women’s sports team at App State were also given the opportunity to come to a practice and share wisdom with current players.

“Everything has changed so much over the years so it’s cool seeing everybody else’s perspective on how it was,” Williams  said. “At practice we got to talk to some of the girls who were on the first team here ever and they were talking about how different it was and they told us how field hockey got established here. It’s really cool seeing their perspective.”

The team sits at 4-8 overall and 0-3 in the Mid-American Conference, but the last leg of the season is the most important. The Mountaineers have shown that they are able to get hot and rattle off wins, so it will be interesting to see how the remainder of the season turns out.

App State is next in action on Oct. 20 when they will travel to face the Redhawks of Miami University.