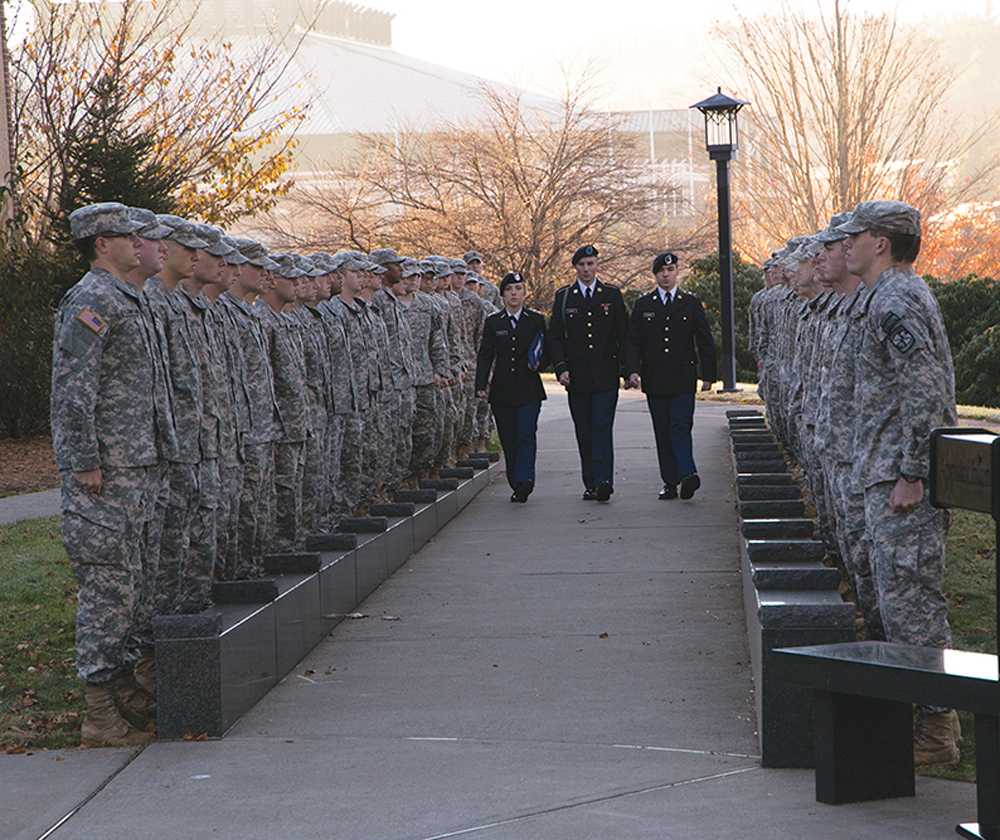 Cadets stand at attention for the Veteran's Day Memorial Service Tuesday morning on the west side of Dougherty Administration Building. Photo by Sarah Weiffenbach | The Appalachian

The ceremony began with a processional of about 40 cadets and the raising of the American flag, followed by the national anthem.

After the opening, Clark Maddux, a former Army platoon leader and company commander for the officer’s candidate school and the current head of the Watauga Residential College, spoke to the crowd about the spirit of Veterans Day and the spirit of the armed forces as a whole.

In his speech, Maddux downplayed a glorification of warfare and said the military and the holiday are symbols of peace first and foremost.

“American soldiers are, above all, reluctant warriors,” Maddux said. “There is, I know from my own experience, this: a desire for peace above all. When Congress passed the concurrent resolution to mark this day in 1926, they proclaimed it fitting that this date be commemorated with exercises designed to perpetuate peace, and when President Eisenhower signed into law the bill that would make Veterans Day a day to honor all American veterans, he asked that the entire nation use this moment to promote an enduring peace so that the efforts of soldiers will not have been in vain.

“That is why we should thank them on this and every day,” Maddux said. “Not to glorify what must be, but to say, with them, what might be.”

“They possessed a self-effacing nature that only served to highlight their essential goodness,” Maddux said. “When I spoke to them with the awe and respect I know they deserved, they simply demured.”

“So let us today thank them for their service, certainly, but let us also do what their oath does not permit them to do,” Maddux said. “Let us dedicate ourselves to the cause of peace.”