Virtual Founders Day 2020 celebrates the past and the present, with eyes toward the future 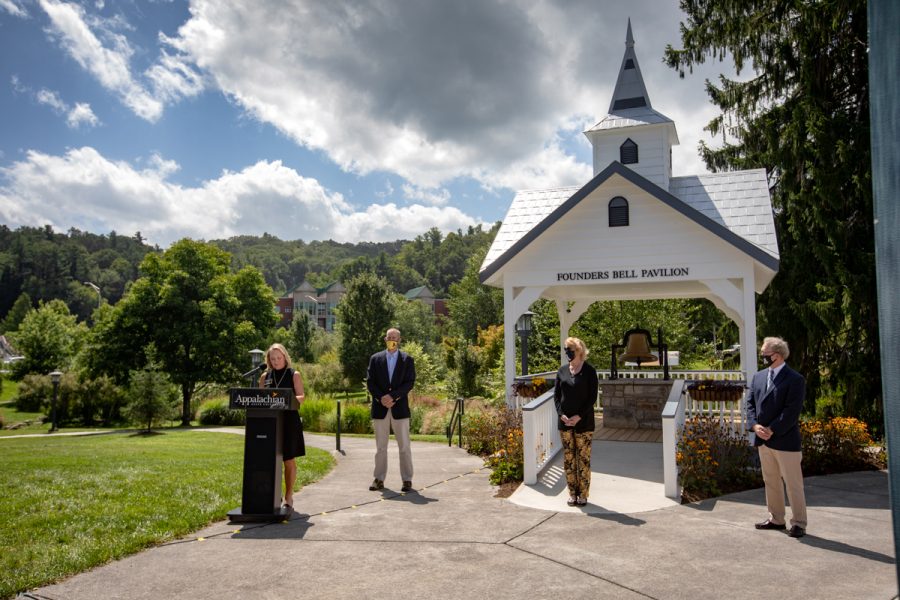 Administrators and guests rang in the third annual Founders Day, celebrating the 121st anniversary of the first day of classes at App State.

Unbeknownst of the university’s founders in 1899 – B.B. and D.D. Doughtery, and Lillie Schull Doughtery – their Watauga Academy of just 53 pupils would become a large public university, alma mater to thousands of students across the country and be thrown in the midst of global pandemic more than a century later.

“I don’t think any of us, including our founders, could have imagined that such circumstances would have brought us to the first, and hopefully only, virtual Founder’s Day,” said Michael Davis, Student Government Association president Sept. 3.

The festivities kicked off with a video history lesson from Dave Blanks, also known as “Dave By The Bell,” the name of the audio engineer’s podcast for University Communications.

Through his App-State branded mask, Blanks interviewed University Archivist Kimberly Sims and peeked at some of the university’s archived artifacts. Among them was an old bottle of bourbon once owned by the late professor and “father of Appalachian Studies,” Cratis Williams, and alumni scrapbooks from the 1920s.

After pre-recorded remarks from Chancellor Sheri Everts, Appalachian Alumni Council President Donna Fiori inducted the new members of the “Bell Ringer’s Society,” a tradition that began last year to honor those who are “exemplars of the power and the heart of the Appalachian spirit,” Fiori said.

The Chancellor rang in faculty members Baker Perry and Karl Campbell to the society this year.

Perry, a geography and planning professor, is the great-great-grandson of founder D.D. Dougherty. Campbell is a history professor, chairs the university’s History Committee and is an adviser for Founder’s Day historical activities.

Everts kicked off the induction ceremony by ringing the Founder’s Bell seven times, with Baker and Campbell doing the same. Collectively, the three rang the bell 21 times – representing the 121 years since the first day of classes at Watauga Academy.

The Founder’s Bell is a symbol of App State’s history and a “visual testament” to the university’s mission to foster academic and community development in the Western North Carolina region and beyond, Everts said.

The bell perches on a stone pedestal in the Founder’s Plaza, located near the recognizable sign welcoming visitors to App State in Durham Park. It once stood outside Anne Belk Hall, and legend has it that students used to rub its bevel for good luck before final exams.

Davis brought the celebration of App State’s past back to the present with a live speech.

The SGA president mentioned the issues the university has been facing with “diversity and inclusion” and responses to COVID-19.

On Aug. 31, nearly 250 students marched alongside the Black at App State Collective to encourage stronger action by administrators on campus race issues.

“We still acknowledge that there is work to be done. These conversations have a strong place on our campus …. we’re committed to doing the work,” Davis said.

The university brought students back to the classroom in August despite COVID-19. App State is still holding in-person classes, with 50 active student cases and 72 active cases in Watauga County as of Sept. 9.

“It hasn’t been perfect, it’s been a little awkward and uncomfortable to wear face coverings, socially distance and be on Zoom for five to ten hours each day,” Davis said. “But, I believe we’re doing the best we can given the circumstances.”

Davis said he encourages the student body not to go back to their “pre-COVID habits” and continue following COVID-19 precautions.

“The past truly does build the foundation for the future, and I think the resilience that App State has shown this summer and in the beginning of the semester proves that when Mountaineers work together, we can overcome any obstacle,” Davis said.