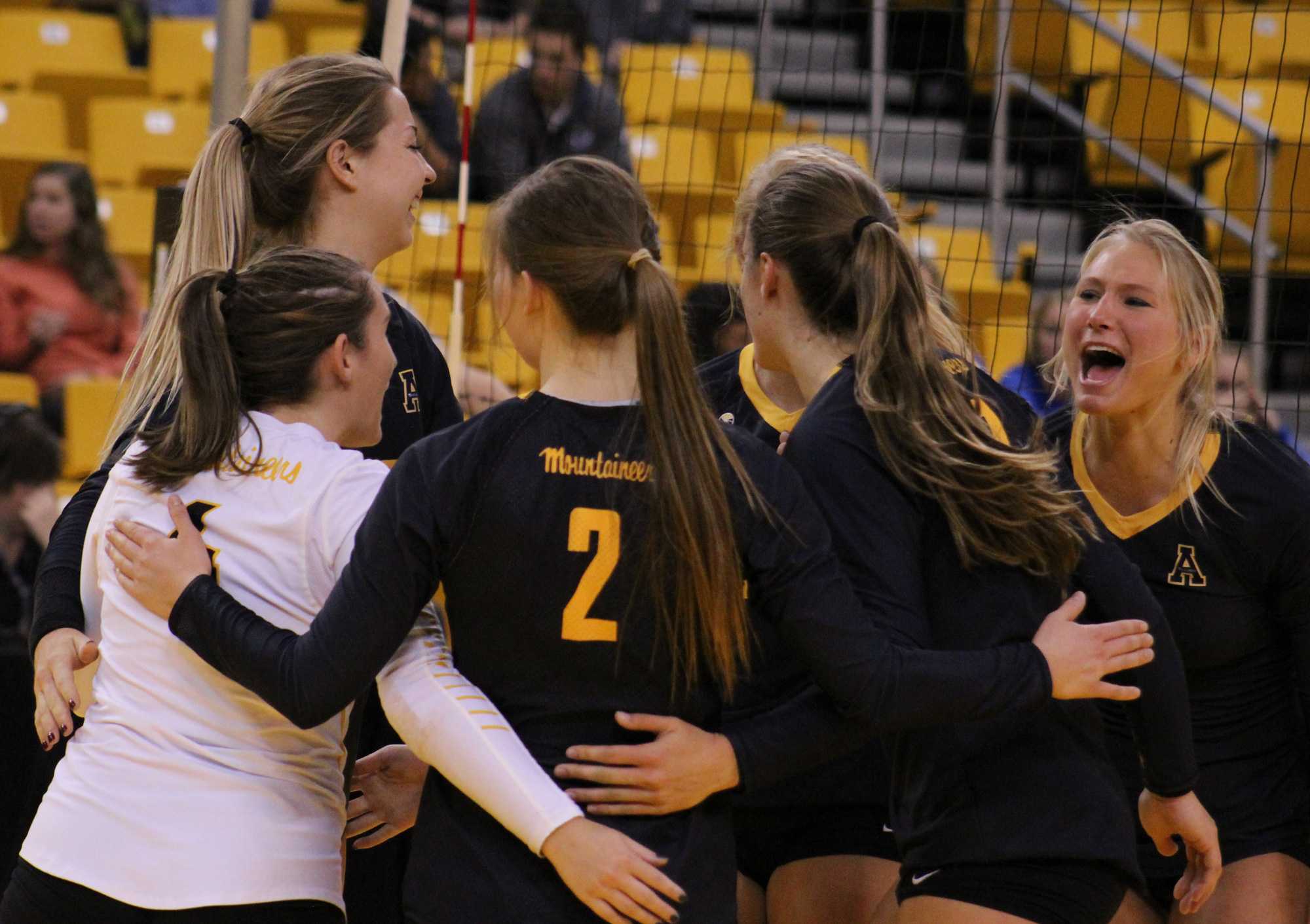 Facing off against Georgia Southern twice due to a postponed game earlier in the season and Georgia State once, App State finished the weekend falling twice in five set battles and sweeping Georgia Southern for a win to finish 1-2 on the weekend. Needing to win two of three, App State volleyball was eliminated from Sun Belt conference tournament contention.

After snapping a 17-game losing streak last Friday, the Mountaineers volleyball team (3-22, 1-11 Sun Belt) were defeated by Georgia State (8-20, 1-8 Sun Belt) 3-2 failing to defeat the Panthers for the second time this season.

Having three games this weekend it was crucial that the Mountaineers come out firing, and in the first set it looked like the Mountaineers were going to cruise to a win, winning the set 25-10.

The Mountaineers stepped off the gas in the next set creating a lot of their own problems with “a lack of a winning mentality,” head coach Matt Ginipro said.

“If you check the box score we dominated them,” coach Ginipro said. “It’s the little things that hurt us. We miss an easy ball and from then it’s a downward spiral that sometimes we cannot stop.”

Coming out of the break it looked like a new Mountaineer team opening the third set on a 6-0 run.

Senior outside hitter Sloan Evans took advantage and remembered the film they watched with six kills in the set leading the team, and punishing the Georgia State defense.

“I am a film rat,” Evans said. “I love watching film and that is where the deciding factor can go into a game to determine who wins and loses.”

However, Georgia State would not go away, having a bend but don’t break mentality and coming out of nowhere to steal the fourth set 25-22 with their stellar defensive showing up.

The last set was back and forth with neither team looking in control of the game. There was a chance for App State to go up two points late in the set but an untimely miss-serve halted their momentum and caused them the set and the game 3-2.

“It goes back to what coach said: we need to find the winning mentality,” senior Ashton Gregory said. “I would like to tell you that we can fix this problem in 24 hours but we can’t. We just have to minimize these mistakes.”

App State will be at home Friday taking on Georgia Southern, and they will look to clean up the mental mistakes and finish the season on a high note.

App State faced off against rival Georgia Southern for the first time this season, after a postponed game earlier in year, and beat them in straight sets giving them their second Sun Belt win of the season.

In what was a dog fight throughout the match for the Mountaineers (4-22, 2-11 Sun Belt), they rallied together to pull out the sweep, only giving up the lead a total of 10 times throughout the entire match.

Georgia Southern (12-17, 4-9 Sun Belt) came out firing in the first set, posting six blocks along with a .293 hit percentage, compared to the Mountaineers one block and a .224 hit percentage. All through the first set it was very back and forth with App State leading much of the time.

After the Eagles went on a small 2-0 run to make it 21-18, it prompted a timeout by the Mountaineers.

“We struggle in the red zone,” head coach Matt Ginipro said. “I immediately wanted to call that timeout just to get their minds right and execute.”

After the timeout, Georgia Southern knotted the set at 22 but then App rallied and won the set with a score of 26-24 feeding off coach’s words.

During the second set, the energy within the team as well as in the crowd started to pick up. The Eagles went up 6-2 early in the set which led to an App State 5-0 run giving them the lead. After taking the lead there, App didn’t feel like giving it back.

“We thrive on our energy,” Ginipro said. “I think our bench is phenomenal, I love our bench during matches because they get into it doing their chants, they’re doing their dances, and they might be saying some things to the other team during the match, and I thought that helped us.”

App carried that high energy into the third set looking for the clean sweep. It started off like the first set going back and forth to a 5-5 tie, and after App State’s 3-0 run to make it 8-5, they never looked back.

With only two lead changes in the set, App held a three-point lead for much of the set. Georgia Southern got it close being down 15-16, but then the Mountaineers pulled away again and eventually won the set 25-19, completing the sweep.

App State will face Georgia Southern for the second time Sunday at 4:00 p.m. looking to repeat their performance on Saturday at the Holmes Convocation Center.

“If it ain’t broke, don’t fix it,” junior Cassidy Stephenson said. “So that’s what we’re going to do.”

In what was a must-win game for the Mountaineers, they ultimately fell to Georgia Southern in a hard fought five sets 3-2. This was a conference tournament elimination game for App State (4-23, 2-12 Sun Belt), in which they needed a win to stay alive.

They came out hot in the first set, taking a big lead at 17-11 amidst a 10-3 run for App State. Georgia State Eagles (13-17, 5-9 Sun Belt) started to claw their way back bringing themselves to within four points. App then took command and shut down their rally posting a 25-22 victory in the first set.

Going into the third set the Mountaineers came out a little flat with Georgia State hoping out to a quick 15-4 lead. App tried to make a comeback mounting a 3-0 run later in the set to bring them to only six point back prompting the Eagles coach to call a timeout. Their offense could then get nothing going as then ended up getting no closer than six points, losing the third 25-17.

Down but not out, the fourth set mirrored that of the first with six ties as well as several lead changes. Facing defeat, App State rallied together and won 25-22 to keep them alive for the dreaded fifth set.

Now 0-11 on the year in games that have gone to a fifth set, the Mountaineers were looking to change their fortune.

“We’ve been struggling with it all year,” said head coach Matt Ginipro. “Players get tight, they start panicking, and then we’re just not executing when we need to execute.”

Georgia Southern took another commanding lead to start out the fifth and never looked back. App got it as close as four points in this last set and that’s where it would end. Georgia Southern won the set 15-11 dashing the Mountaineers championship hopes.

Errors were a huge factor by both teams in this game and it killed App, totaling 34 errors on the night.

Another thing that also hurt App State was the lack of a lot of experience in those crunch time situations that they lost from last year.

“We’re mentally weak, we don’t know how to close out sets,” said senior Ashton Gregory. “Part of that comes with age and experience.”

Although being eliminated from Sun Belt tournament play, the season isn’t over yet. Two games remaining in conference play has App looking to close out the season on a high note and looking to send their seniors out in a good way and prepare their underclassmen for the next season.

“I think at that point you just have to play for pride,” said Gregory. “Especially next weekend we need to at least end on two wins. End the season on something instead of just a grey blob.”

The Mountaineers will be back in Holmes Convocation next weekend facing off against South Alabama and Troy in their final two games of the season.