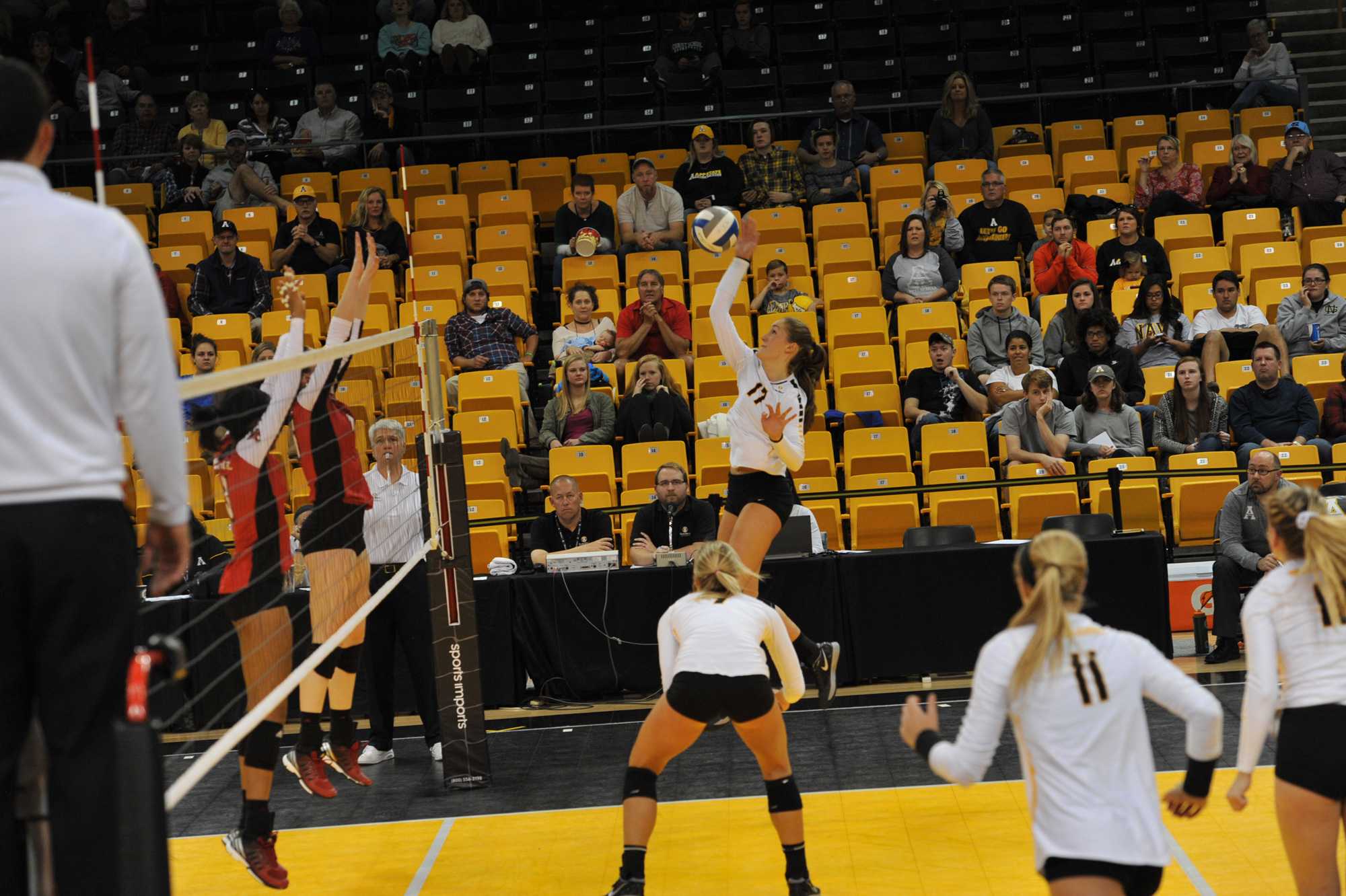 App State volleyball put an end to their losing streak on Friday night but fell on Sunday afternoon to go 1-1 on Homecoming weekend.

The Mountaineers (3-18, 1-7 Sun Belt) came out of the gates battling, taking the first set with a score of 29-27. The score was tied 19 different times along with seven lead changes but there were no signs of giving up.

“Before the match we talked about fight, battle, learn how to fight,” head coach Matt Ginipro said. “We did that in the first set and that’s how we came back and won it.”

Stepping on the gas in the second set, the Mountaineers brought their defense totaling five blocks in the set alone.

Tied 13-13, the App momentum kicked in and they went on a 5-0 run prompting UL Monroe to call a timeout. Serving aces also helped close out the match with two coming late in the set to keep the momentum on the home side with App eventually winning the set 25-17.

The Warhawks weren’t going to lay down coming out of the break into the third set. It was a back and forth set early with UL Monroe clearly not ready to give up just yet.

“They’re going to come and they’re going to punch you back,” Ginipro said. “I thought ULM came out in the third set and did a really good job but then we picked it up, they didn’t quit.”

It was an all-around team effort from the Mountaineers, with the stat sheet being filled up from every player. Four players had over seven kills, five players with a serving ace, and three players with over two blocks.

“It always feels good to show up to a game,” senior middle blocker Ashton Gregory said. “I’m glad that everyone did their part, we’ve been focusing on that a lot.”

Playing again Sunday at 12:30 p.m. against UL Lafayette, the Mountaineers look to keep the momentum going and pick up another win in the Holmes Convocation Center.

“They have two really athletic middle who they like to set,” Ginipro said. “If we can get them out of system with our servers then we can take their middles out of the offense and focus on their pin hitters.”

After ending a 17-game losing streak with a victory over UL Monroe on Friday, the Mountaineers were defeated by the UL Lafayette Ragin’ Cajuns 3-1.

Friday’s match against the Warhawks was the Mountaineers (3-19, 1-8 Sun Belt) best-played match of the season. They recorded 44 kills and 55 digs and out-hit the Warhawks by nearly 10 percent.

Their follow-up match against the Ragin’ Cajuns (8-16, 4-5 Sun Belt) was littered with mental mistakes and a lack of communication, resulting in the loss.

“We have a group of players that aren’t making this a priority, flat out,” head coach Matt Ginipro said. “Things have come up this weekend that has proven that. It’s something that needs to be addressed at the player level.”

The first set went back and forth with both teams struggling to find momentum. App State actually started to pull away at one point, holding on to a four-point lead, but poor communication on the court resulted in a Cajun comeback. Lafayette eventually won the set 25-23.

Even though Lafayette was plagued with service errors during the second set, the Mountaineers hit percentage fell 10 percent and they allowed 16 kills from the Ragin’ Cajuns.

App State sophomore outside hitter Melissa McMath, who had been a bright spot during the first set, recording six kills, fell off during the second set and the Cajuns won the set 25-17.

App State played better in the third set, bringing their hit percentage 15 percent and recording 21 digs. Outside hitters Emma Longley, Melissa McMath and Jenna Talbert put up four kills each and the Mountaineers played strong defense, bringing down the Ragin’ Cajuns hit percentage nearly 40 percent from the second set. App State dominated the final ten points of the set and took their only set victory 25-15.

Fighting for position in the fourth set, App never quite found their footing, allowing the Cajuns to control most of the set. Hitting percentage fell dramatically once again and their defensive stand was lackluster. App State suffered some hit errors late in the set and the Ragin’ Cajuns took the final set and the match 25-16.

“I think we just failed to execute. We’ve been in high-pressure situations [before] and had it and lost it. We really don’t know what the issue is but it’s been showing up all year and we just can’t seem to get out of the rut that we’re in,” freshman Emma Longley said.

The Mountaineers will travel to Troy, Alabama on Friday to take on the Troy Trojans in another Sun Belt matchup. To turn it around, they will need to clean up the communication issues and find motivation as a team to fight to victory.