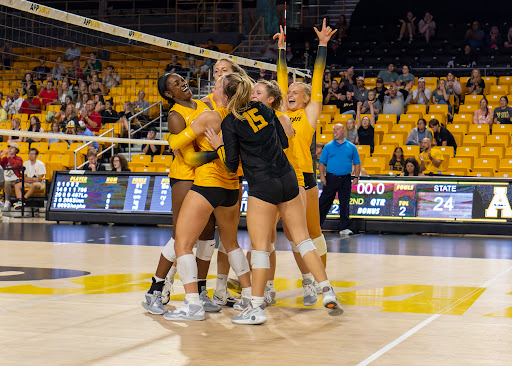 App State volleyball celebrates its set-winning point against ETSU to put them up 2-0 in their August 18, 2022, exhibition match.

App State routed California Baptist 3-0 in match one of the weekend, handing Rumely Noble a victory in her opening match as head coach.

“I’m incredibly proud of my team,” Rumely Noble said. “We played some really high level volleyball today and we fought really hard as a group.”

The two teams battled back and forth in a tightly contested first set. The Lancers jumped out to an early five-point lead on the Mountaineers, but the Black and Gold captured the lead late in the set. After tying it up at 23 apiece, App State scored the final two points to claim the set.

Each of the final two sets were equally competitive, finishing 25-23 and 25-22. Junior outside hitter Madison Baldridge led the team in kills with 11, while freshman middle blocker Maya Winterhoff recorded nine. Junior setter Sophie Cain led the way in assists, finishing with 17, while senior setter Sam Bickley tallied 13 assists. Freshman libero Kenady Roper posted a team-high 14 digs in her first game as a Mountaineer.

The Mountaineers faced an early eight-point deficit in set one, but managed to tighten up the set before the Buccaneers completed their 26-24 opening set victory.

Momentum initially carried into the third set for the Mountaineers, but the Buccaneers battled back to capture the fourth set 26-24 and force a fifth set.

The fifth and final set went back and forth until Charleston Southern pulled away for a 15-12 set win and 3-2 match victory.

On the final day of the tournament, St. John’s defeated App State 3-2 in another challenging match.

“We played a hard-fought match and just came up short in the end,” Rumely Noble said. “To battle back from being down 0-2 and push to a fifth set is never easy. I’m proud of our defensive effort and where we are at overall as a team after our first weekend out.”

The Red Storm took the first two sets in 25-21 and 25-20 victories. Facing elimination, the Mountaineers fought their way to 25-22 and 27-25 wins in sets three and four, forcing a fifth set.

With victory on the line, St. John’s controlled the fifth set after jumping to an early lead and won 15-8.

The Black and Gold compete in the Wofford Tournament this weekend, Sept. 2-3, taking on University of South Carolina Upstate, Wofford and Eastern Kentucky. Action begins at 10 a.m. Friday against USC Upstate. ESPN+ will livestream the 7 p.m. match between App State and Wofford.