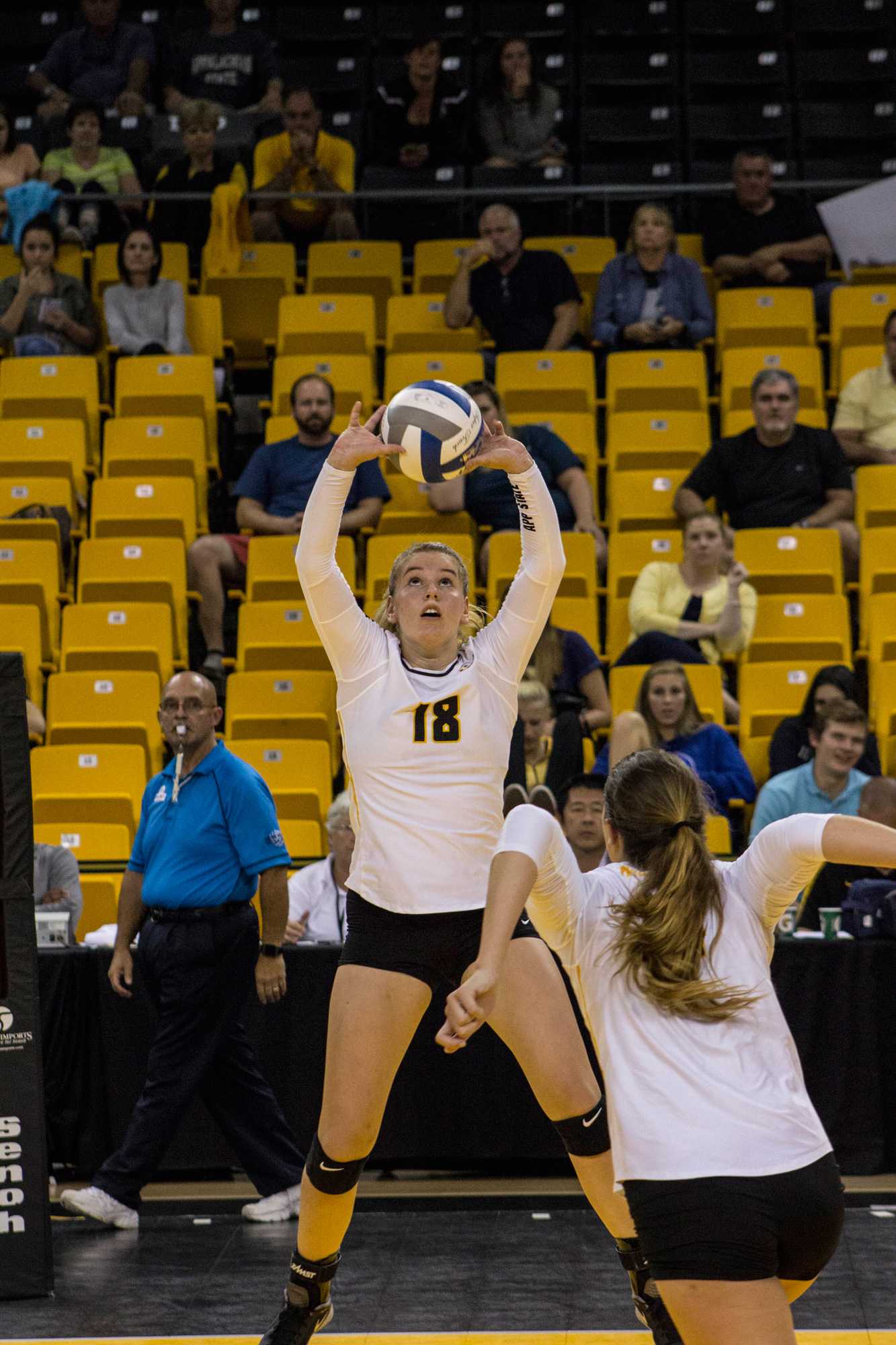 App State volleyball held their annual Black and Gold invitational tournament at Holmes Convocation Center this weekend for their first home games of the season hosting UNC Wilmington, Wofford and Ohio. App State fell in all three matches, 3-0, 3-2 and 3-0 being the only team unable to capture a victory on the weekend.

The Mountaineers (2-2) did not open up the tournament the way they would have liked with freshman Emma Longley being the only player in double digit kills (13) and were swept 3-0 to UNCW in the first game on Friday night.

Staying close in the first match, the Mountaineers fell 25-23 with seven early kills by Longley. It looked as it would be a hard fought battle the rest of the way.

“When you go from a close set to being up 19-14 and then they go on an eight point run, that’s when panic sets in and the mental side of things [kicks in] because we are young and inexperienced,” head coach Matt Ginipro said.

Not wanting to use youth as an excuse, the Mountaineers 0.43 hitting percentage in the second set and .088 in the third showed it may take a while for App to adjust with such a young team.

“We weren’t very good. We were young and we made mistakes and panicked,” Ginipro said. “We didn’t execute on our side of the net and I hate using it as an excuse, but it is just youth.”

Wilmington would not look back after their run and went on to win the second set 25-20 to lead 2-0 at the break.

“We do have a lot of young players taking big swings but it is not an excuse for anything and we have to learn how to adjust to it and learn from our mistakes and get better,” redshirt freshman Jenna Talbert, who finished with nine kills, said.

The Mountaineers struggled to come back mentally after UNCW’s run and were outplayed in the third set, falling behind 23-13 at one point to ultimately fall 25-14.

“At the very least I told them to put something good on the court because they (UNCW) were on a roll and we weren’t following game plan as it is so let’s at least work on pride,” Ginipro said.

Longley once again led the team, but Ginipro let the team know after the game that they cannot have only one freshman carrying the team.

“Teams will start to key on her and tonight we couldn’t get a connection with the middles and that will hurt us a lot if we can’t develop a connection somewhere else,” Ginipro said.

Freshman outside hitter Emma Longley followed up her solid performance against UNCW with 27 kills (the most of any player in the match) and 14 digs. Fellow freshman outside hitters Melissa McMath and Mikel Coleman also turned in 13 and 10 kills respectively but the Mountaineers ultimately lost the match in five sets.

In the first set, App State and Wofford traded points back and forth early and saw several lead changes and tie ups. Wofford (2-3) eventually began to pull away and won the set 25-21.

The second set saw the Mountaineers(2-3) with more positive play, putting up better defensive numbers and increasing their hit percentage. They started out hot, jetting out to an early lead while Wofford got as close as two points. App State went on to win the set 25-20.

App took another win in the third set 25-23 by dominating on the defensive side of the ball, holding Wofford’s main outside hitter Colleen Reilly to just one kill. While the Mountaineers hitting percentage dropped to just .125, it was enough to take the set.

Freshman setter Amanda Krahl came into the game during the fourth set after junior setter Ashlyn Brown went down with a back injury. While the consensus was that Krahl played well under the circumstances, losing Brown definitely brought down the Mountaineers chances of winning the match.

“That hurt us,” head coach Matt Ginipro said. “Ashlyn is not only our starting setter but she’s a leader on the court.”

That showed as App went on to lose the final two sets with scores of 25-21 and 16-14. The Mountaineers put up a good fight, increasing their blocks scoring points at key spots to keep the score close but couldn’t catch the breaks they needed to win.

Ginipro once again blamed part of the loss on youth.

“We had four freshmen out there on the court that were scared. Amanda [Krahl] is in there running the offense for the first time in a tight match. We just couldn’t finish it out,” Ginipro said.

Longley felt that even with the loss, they played a better match than against Wofford.

“We had a new mindset. We were going to be competitive and I think we did that,” Longley said. “We flipped it around a lot. We came out with a lot of energy. We continued to fight but we just fell apart a little bit in the fifth set.”

One bright spot in the match was McMath putting up a career high 13 kills.

“I was just trying to swing hard and telling my teammates to put the ball in play. I was trying to make smarter shots and talk to my teammates more,” McMath said.

While App State lost the game, the match gives hope for the potential for improved play as the season goes on and the team begins to gel together.

App State finished up their annual Black and Gold invitational tournament on Saturday evening with the match we were waiting for: the Camellia Bowl rematch with Ohio. The Mountaineers (2-4) lost their first two Black and Gold matches previous and were looking to avoid a winless tournament in their last match but ultimately were swept 3-0.

Freshman outside hitter Mikel Coleman shined in the match by leading the Mountaineers in kills with 10 on 23 attempts and also recorded three digs. In some of the first competitions she had seen on the collegiate level, she showed great potential for the future and the possibility of having significant playing time as a freshman.

“This was my first tournament playing, which made me very excited. One thing that I was really working on was not playing for myself but playing for my team and getting better each set,” Coleman said.

It would not be enough in the first set with the Bobcats (2-5) dominating on every front. App State’s hit percentage was nonexistent with two hitters going negative and a lack of solid passing.

Ohio recorded four more kills, four more assists, eight more digs and seven fewer errors than the Mountaineers and would go on to win the set 25-14.

The second set saw improved play from App State but they would suffer another loss. While their hit percentage improved to .258 and their errors dropped from nine to five, Ohio still out hit them with a number of .387 percent and put up an errorless set. The Mountaineers put up a fight and made a statement to show they can play with Ohio but ultimately fell.

With App State trying to avoid the sweep in the third set, the Mountaineers showed the same fight and refusal to roll over for the bobcats. They opened up with an early lead but Ohio fought back to make it a back and forth match the entire way. App hit right along with Ohio, keeping their hit percentage within one percent of the Bobcats. They also had three fewer errors than the Bobcats in the set, but had fewer digs. It was close in the end, but Ohio edged out the set 25-23 and took the match in a three set sweep.

Head coach Matt Ginipro was proud of the way his team played and chalked up the loss to Ohio simply playing better.

Senior libero Kati Stammen led the team in digs with 13 and feels like the team will get better and cannot make excuses.

“We have some things to learn and yeah we keep saying that we’re young but, who cares?” Stammen said. “They know how to play and they just need to go out and play and eventually it’s just going to keep rolling.”

App State travels to Western Carolina take on the Catamounts Tuesday at 6 p.m.