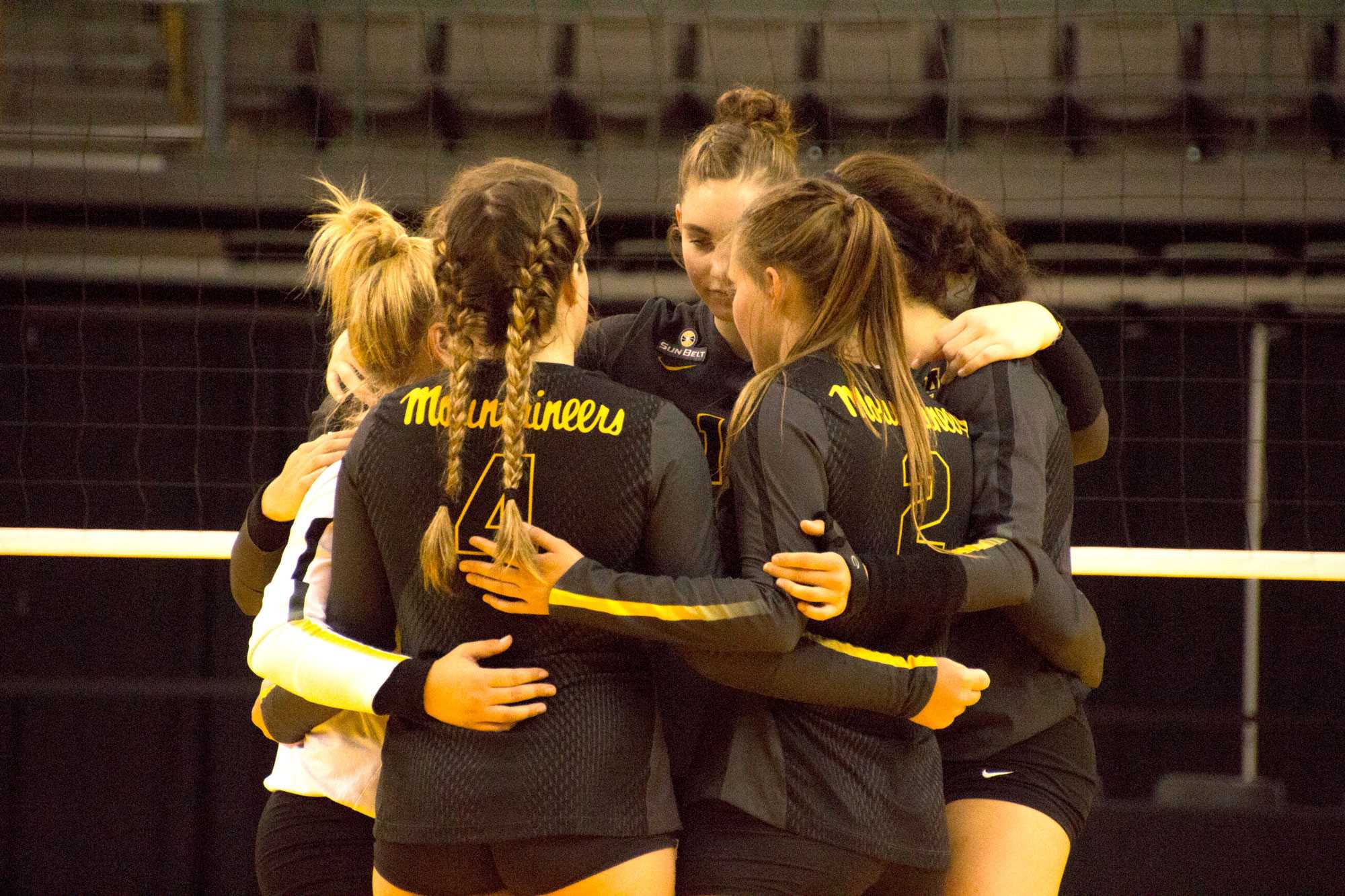 Mountaineer outside hitter sophomore Emma Longley sat sideline with a boot on her left ankle and the Mountaineers took the court for the first time without her since she joined the squad in 2016. The weight then fell on the shoulders of freshman middle blocker Kara Spicer who finished with a team-high 17 kills.

“For me, the biggest thing is taking the energy [Longley] had on the court and still making it a presence,” Spicer said.

Towson set the tone for the night but the Mountaineers answered back each time until the Tigers went up 17-15 and forced a timeout. Out of the timeout, sophomore setter Amanda Krahl sparked life into the team with a crucial kill and the Black and Gold tied the game 18-18.

The Mountaineers took a 22-20 lead until senior Payton Windell of Towson landed wrong and her knee gave out. After the injury timeout, freshman outside hitter Lexi Kohut and senior middle blocker Cassidy Stephenson landed a pair of kills and an attack error gave the Mountaineers their first and only set win 25-22.

The second set would start off the same but that would be the only similarity. After a lengthy rally over the net, Kohut came down with the kill and took a 5-4 lead. Both sides took a pair of timeouts throughout the set and the Mountaineers could not regain their footing. Errors dominated the Black and Gold totaling 10 by the end of the set and the Tigers took it 25-23.

On the night, the Mountaineers had 28 hitting errors with only five of them coming after blocks from the Tigers’ front line. After the second set, Ginipro took the team off the court and back into the locker room.

“It’s that effort and mentality of not going after everything with 100 percent effort that’s really hurting us right now,” Ginipro said.

In the final two sets, things would follow the same storyline. The Black and Gold racked up four errors in the third set and 11 in the fourth, resulting in Towson taking the first game of the invitational 3-1.

With the NCAA establishing challenges as an official part of the game this year, neither side was shy to pick up the card and use it. Towson had two of the three challenges of the night, winning one of them and Appalachian won their only challenge. All three challenges came in the third set.

The Mountaineers seem to have a lot of work to do and a lot of time for Longley to recover until the Sun Belt Conference play begins on Sept. 22 at Little Rock.

App State volleyball (2-4) came out with a loss after a hard-fought battle against Eastern Tennessee State University (2-3) in their second of three matches in the App State Invitational on Saturday. The Mountaineers were able to win the first set but dropped the final three, resulting in a 3-1 loss.

Falling late the night earlier against Towson in the first game of the tournament, the Mountaineers looked to bounce back against ETSU but ultimately struggled again with their young core.

During the first set of the game, the Mountaineers came out strong with aggressive defense at the net and in the back row. The first set became neck and neck, but senior middle blocker Cassidy Stephenson was able to tie up the game, 15-15, forcing the Buccaneers to call a timeout.

“I think pushing both our middles today really helped,” freshman middle blocker Kara Spicer, who finished the game with 13 kills, said. “I just think that once we’re in system we are really stable and can really put a ball away.”

Taking the first set against ETSU, the Mountaineers entered the second set with a dominant mindset. Spicer was able to swing at the ball but it was called out, which led to head coach Matt Ginipro calling a challenge.

“As I told the guys yesterday, I am a huge supporter of the challenge replay system,” Ginipro said. “Just get it right. We talked to our team this preseason: ‘Hey, if you guys are adamant about it because you see it on the court, I’ll challenge it,’’” Ginipro said.

Ginipro was right to challenge and the point was made in the Mountaineers favor. App picked up momentum for a 4-0 run, but was unable to win the second set, losing 25-19.

“I felt that in the second game, when they came back stronger and they pushed us a little bit, we kind of got tensed up,” Spicer said. “And usually when we do that, we don’t play as well as know we can.”

However, this loss of power did not go on for long. At the beginning of the third set, App went on a four point run, with freshman outside hitter Lexi Kohut leading in kills. Kohut finished the game with 17 total kills.

“Yesterday [against Towson] we really struggled with hitting out of system and today we kind of had the right mentality,” Kohut said. “Just go high off the hands, find the open spots on the court, and be smart about our spots. Put it in the court and let our defense take care of all the plays.”

This mentality was working in the Mountaineers’ favor, with remarkable defense played in the back row. App State capitalized on this, which allowed senior setter Ashlynn Brown to get a kill and tie up the game 23-23, forcing ETSU to take a timeout.

“That’s a kid [Brown] playing on a bad back too,” Ginipro said. “She’s a senior setter and she played like a senior setter tonight who’s hurt. I think we just have more trust in her right now, running the offense, because she is a senior, she is more experienced. She adds so much to the team because she is high energy and she also is calm and calms her teammates down”

The set remained neck and neck until ETSU broke away with a two-point lead, causing the score to be 27-25. With the fourth set underway, App played aggressive offense but was unable to take the lead. App ended up dropping the fourth set to the Buccaneers to lose their second straight match.

However, there were still plenty of lessons to be learned from the game.

“We do good things and get good leads and then we let the other team catch up,” Ginipro said. “Part of that is youth and inexperience, that’s probably the biggest factor of it. That’s the kind of mental hurdle that we are trying to break right now.”

Unfortunately, the Mountaineers (2-5) fell 3-1 to Virginia (3-2) later in the day to be swept 3-0 in the Appalachian Invitational. Spicer was named to the all-tournament team with 37 total kills and a .440 hitting percentage throughout the weekend.