Volleyball swept twice on the weekend 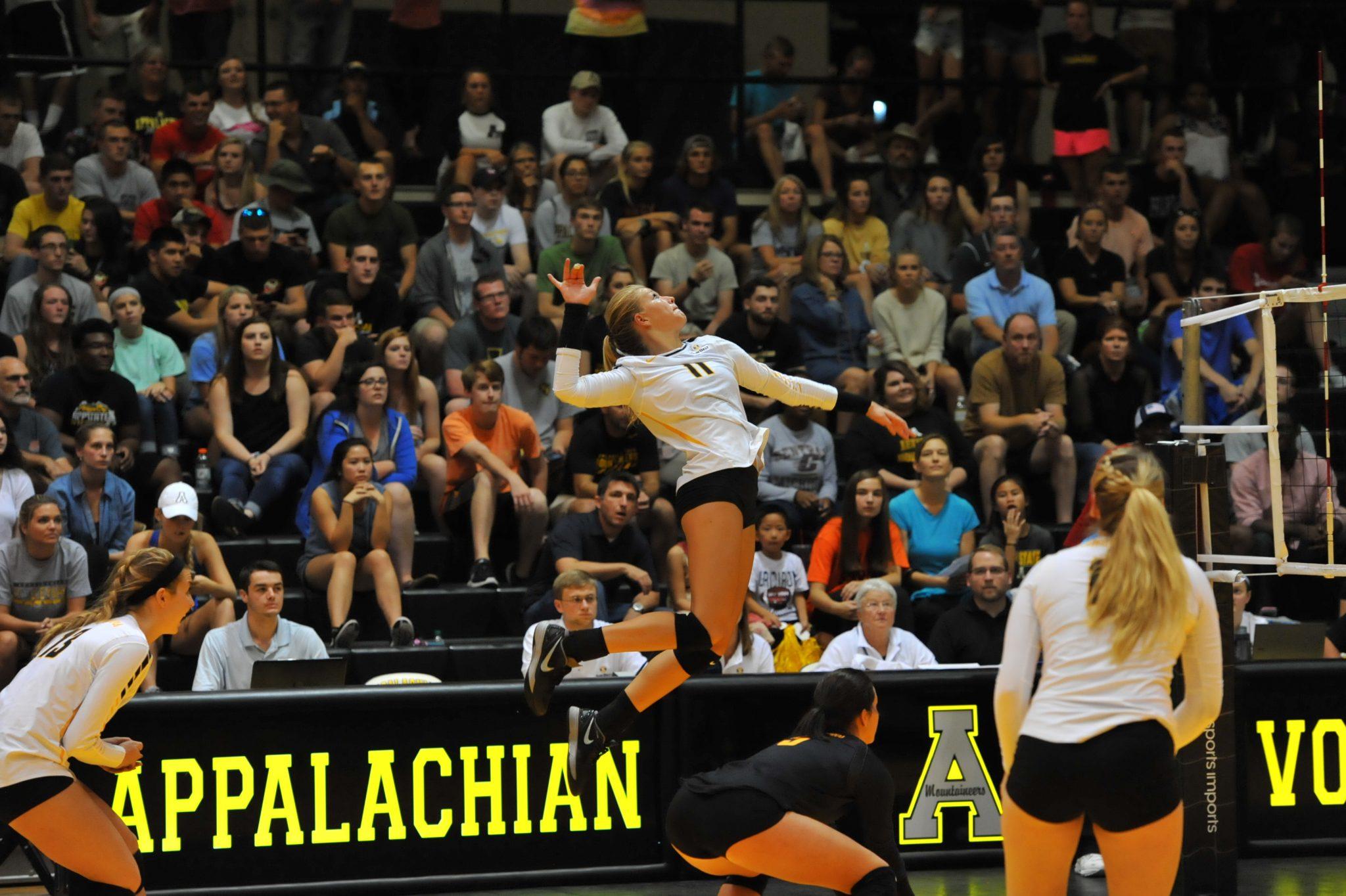 App State volleyball continued to show their youth this weekend as they were swept in both matches to extend their losing streak to 12 games.

Dominating the game, the Red Wolves (9-6, 1-0 Sun Belt) were too much to handle for the Mountaineers, holding them to under 16 points in all three sets. This was also helped by App States .149 attack percentage as a team, compared to Arkansas States .395 percent.

The first set looked promising for the Mountaineers (2-12, 0-1 Sun Belt) as they hung with Arkansas State tying the set at 13, but the Red Wolves went on a defeating 12-3 run to close out the set.

“Once they started getting in their groove, it’s really hard to counter-attack against them,” head coach Matt Ginipro said. “When our attackers aren’t hitting the shots that we talked about it makes it easy for them.”

App’s hitting percentage in the second and third sets ranked among the lowest on the season sitting at just .069 and .033 percent and they struggled behind the line serving the ball recording no aces along with eight serving errors. Arkansas State finished with eight serving aces and only two errors.

“There were some things we wanted to do to hurt them we just didn’t do it enough,” Ginipro said. “Part of it was serving, we didn’t serve well at all tonight.”

Defensively, the Mountaineers were not as sound as they had hoped. With a season average of 15.1 digs a set, they only had 23 for the whole game. App also fell short of the blocks per game average which sits at around five, only having four team blocks.

“I think that as a team we need to work on our defense since our block isn’t as strong is it could be,” freshman outside hitter Emma Longley said. “Our main focus is mentality and going after everything because that’s what we are struggling with right now.”

A scary moment occurred in the middle of the second set when junior libero Olivia Loeffler and senior defensive specialist Kati Stammen collided midcourt diving for a ball and ending up banging their heads together.

Both players were laying on the ground for a few minutes, then were helped up and taken to the bench to receive treatment.

“They’re both really tough and I think that they will be back on the court soon,” Longley said.

Playing Sunday at 12:30 p.m. against conference foe Arkansas Little Rock, the Mountaineers hope to put an end to their long losing streak.

“I think we can get at their ball control a little bit more than Arkansas State,” Ginipro said. “The biggest thing we have to deal with against Little Rock is that they’re so physical at the net and our attackers have to be able to move the ball around to get it passed their block.”

App State volleyball was swept 3-0 by Little Rock in their second conference match of the season at Varsity Gym as their losing streak reached 12 straight games.

Despite losing the first set 25-13, the Mountaineers (2-13, 0-2 Sun Belt) bounced back strong in the second set trying not to fall behind two sets to none. In a game that had seven different lead changes, the Mountaineers found themselves down 24-19.

It was freshman and Boone native Sydney Farthing who came in and delivered four key serves to tie the game at 24 all and give the Mountaineer’s a chance to even the match.

“I thought Sydney did a phenomenal job, I threw her into a frying pit,” head coach Matt Ginipro said. “Being a freshman and going out there in that type of situation and rattling off four points to serve us back to a tie, that’s big time.”

Another true freshman, Emma Longley, who is leading the team in kills on the season, has established herself as a key component to this year’s team, appearing to always be on the floor for the Mountaineers.

Longley led the Mountaineers Sunday afternoon with 10 kills and 31 total attempts, giving her six more attempts than anyone on both sides of the floor. Longley acknowledges that in order to win games there has to be a change in mentality and approach.

“I think it’s going to start early in the morning with practices,” Longley said. “We need to fix our mentality and bring more energy which will hopefully transition into games.”

Being 15 games into the season, the Mountaineers have no doubt that there are some key adjustments to be made. Ginipro and Longley both seem to be on the same page as far as what it will take to turn around this year’s 2-13 start.

“Our self-talk is really negative,” Ginipro said. “We as a team right now are not in a great mental place and that is our biggest hindrance. Part of that is youth and inexperience, but a lot of it has to do with our personal mentalities.”

The Mountaineers seem to be struggling after second sets, which could reflect on the mental aspect that Ginipro and Longley are referring to. Friday night App State lost 25-7 in the third set and on Sunday they dropped 25-15 in the third even though they only lost the second set by two points.

Sloan Evans is one of the four seniors on this Mountaineer team. With a long season still ahead, Evans has confidence that this team has the ability to turn things around.

“Clearly our record may not be reflective of what we want to achieve,” Evans said. “I still have full faith in this team and I know we will all be ready to get back at it on Tuesday.”

After falling in two home conference matches this weekend, the Mountaineers will travel to Arlington, Texas to take on UT-Arlington on Tuesday in search of their first Sun-Belt win of the season.