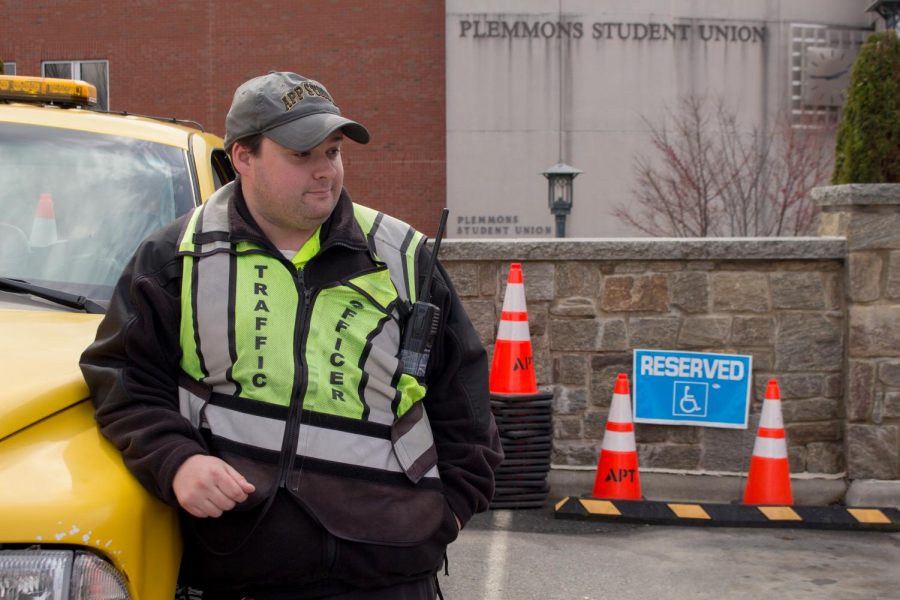 Traffic Officer 613 directs parking traffic during the day to ensure voters have places to park. He said only one person has used the accessible parking space for voting in the past two years.

Absentee ballots, poll booths and caucuses are not the only way Americans are voting this primary season. App State’s polling site is set up for those whose voting looks a little different.

Matt Snyder is the director of the Watauga County Board of Elections. He said all 20 voting sites in the county should be up to the accessibility standards set in the Americans with Disabilities Act.

“We want to make sure all Watauga County voters get out and vote,” Snyder said. “If anyone has a concern that their disability may affect that … contact our office and we will work with them to make sure that they don’t have to cast a ballot.”

The ADA was passed in 1990 and sets guidelines for accessibility to places of public accommodation and commercial facilities by individuals with disabilities. These policies apply to areas such as building design, employment and voting.

Within the disability rights section of the law, the ADA recognizes voting as a “fundamental right” and a “hallmark of our democracy.” This includes, but is not limited to, people who have intellectual or mental health disabilities, people who are confined to a wheelchair or walker and people who have visual impairments.

The law  requires that public entities ensure that people with disabilities can access and use their voting facilities.

Each disability is different and therefore requires different assistance. On App State’s campus, one of these ways is an Accessible Voting Ballot Marking System, called the AutoMARK, in the Plemmons Student Union.

“(The AutoMARK) is an ADA-compliant machine used to assist voters in marking their ballot. A voter uses the same ballot as everybody else,” Snyder said. “They put in the machine, the machine will read all of the contest information on the ballot that you can listen to on headphones.”

Snyder said voters have the option to adjust the brightness and size of the text on the screen, and use a Braille keyboard to mark their ballot.

Voters are also allowed to have anyone of their choosing assist them while they vote, as long as they are not an employer or a union worker.

Gary Moorman, early voting site manager for the Plemmons Student Union site and the chief judge for Super Tuesday, said the majority of voters who need assistance at the student union bring someone to assist them.

“The machine is hardly ever used,” Moorman said. “There aren’t that many people who come without people to help them.”

Moorman, who has worked at the Boone 2 precinct site since 2014, said the student union’s other ADA-compliant assistance, curbside voting, has not been used much in early voting either, but he expects Super Tuesday will bring a lot of curbside voters.

“I’m excited,” Moorman said. “The more people we can help facilitate voting, the better outcome it is.”

Snyder said curbside voting is usually located at the parking space closest to the polls.

“If they have a reason due to age or disability, they’re able to vote from there,” Snyder said.

Despite the small number of voters who are disabled at the App State polling site, the ADA requires every location be prepared when voting is open. But, Snyder does not think voters will let their disability get in the way of their democratic duty.

“We have had a few calls over the past two weeks from folks asking about the ease of voting based upon their disability and have been able to explain to them their different options,” Snyder said.