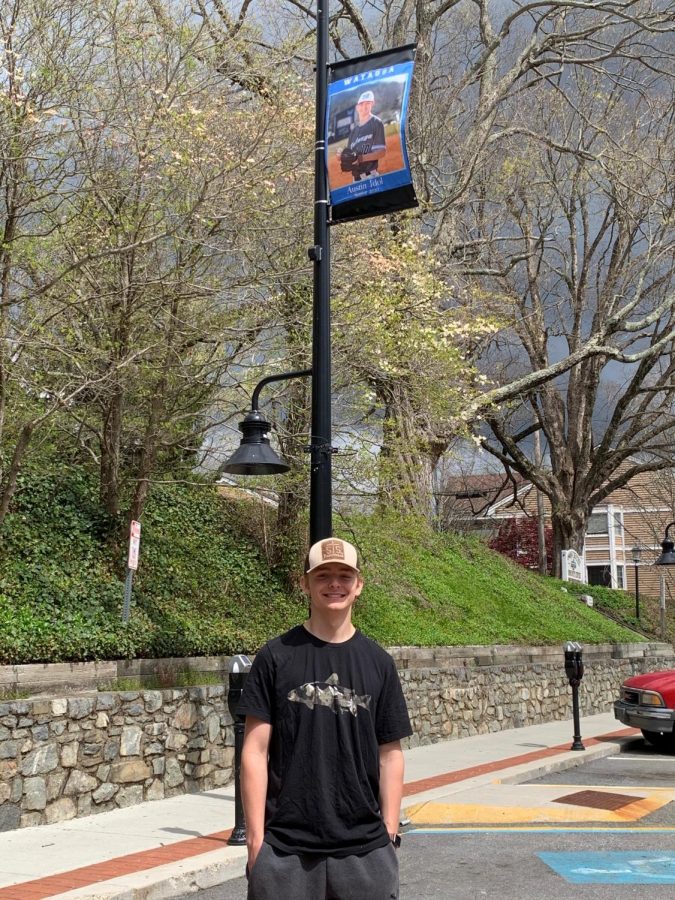 For many Watauga High School spring senior athletes, the cancelation of their season due to COVID-19 brought an immediate end to their athletic career. Many athletes missed out on their last chance to compete, play with their teammates, senior night celebrations and the annual athletic banquet.

The Watauga High Booster Club and the town of Boone decided to honor these athletes by hanging up each of the 53 athletes’ senior banners on King Street. The banners feature the player’s name, picture and sport over a light blue background

The athletes were heartbroken when they found out their final season was over.

“I was really sad because I have been playing soccer my whole life,” Emmie Huffman wrote in a text message. “It came to an abrupt end — and I wasn’t expecting it. I had been playing with these teammates almost my whole life, and it was so devastating that our last season together ended so fast.”

Softball player Marlie Stilwell, who committed to play for Belmont Abbey College, also said she was disappointed when she found out their seasons were canceled.

“I was devastated because I’ve been waiting for this moment, my senior season, for four years and there was nothing I could do about it,” Stilwell wrote in a text.

“Seeing my banner on King Street meant a lot to me and all my other fellow spring athletes,” baseball player Andrew Freeman wrote in a text.

Softball player Bailey Whitehead-Price said she was “super excited” to see the banners hung up and that they provide “a little bit of closure” to the way the season ended.

The school’s booster club already had the spring senior athletes’ banners made, and was looking for a way to honor the athletes while social distancing.

“We wanted to find a way that we could display (the banners) and families could still enjoy them without coming onto campus,” said Emily Rothrock, booster club director of membership and public relations. “We knew if we hung them on campus, that that would be inviting people onto a closed campus.”

Rothrock reached out to the Town of Boone to see if it could help. Usually around this time, the town hangs Appalachian Summer Festival banners, an annual arts event that was canceled because of the pandemic. The town needed something to replace those with, and the Watauga High banners were the perfect fit.

However, the brackets used to hang up the King Street banners were not the same size as the Watauga High banners. The Boone Public Works department had vinyl sewn to the top and bottom of the banners so that they would fit the brackets.

“They really went above and beyond,” Rothrock said. “I wasn’t sure it was going to happen because there were a lot of logistics that weren’t lining up, but they were so excited to honor our student athletes and the class of 2020, because it’s been such a hard ending to their high school careers.”

Rothrock was happy that the school and the town worked together to get the banners hung up.

“We really loved working with the Public Works department, because then it was really more of a community effort, it wasn’t something that we just did on our own,” Rothrock said.

The booster club surprised athletes and their families with the banners. Rothrock said only the booster club, public works department and athletic director Dustin Kerley knew about the banners before they went up on the morning of April 29.

“When Austin and I drove downtown to see the banners it was all pride. Pride that our school and booster club initiated this gesture, pride that our town loves our kids and would put forth the time and effort to do this, and pride in the kids on those banners,” said Alison Idol, baseball player Austin Idol’s mother. “The ones who lost their senior year but never got angry. It was just wonderful to drive to the end of town, turn around and see them honored in that way.”

Though traditional events like senior night and the athletic banquet were taken away, COVID-19 also took away these students’ chances to compete one last time for their high school.

“Last year, our women’s track and field team won the conference championship for the tenth year in a row,” Rothrock said. “So we have a lot of teams that were not just ready to enjoy a senior season, they had big goals that they were ready to accomplish.”

“On our Facebook page, we have really good traction there. Our highest post had been over maybe 2,000 engagements,” Rothrock said. “But the post that we did when this was done, we hit 35,000. I think it was something that probably got shared a lot, and it just resonated with people in general about seniors and ways to celebrate them.”

The banners will be displayed on King Street until the end of May.

“I don’t think there’s anything we can do to make up for the experiences our students missed out on, but this is certainly a special way to recognize our athletes,” Watauga High School principal Chris Blanton said.