“We were so ready:” App State field hockey deals with postponement of their season 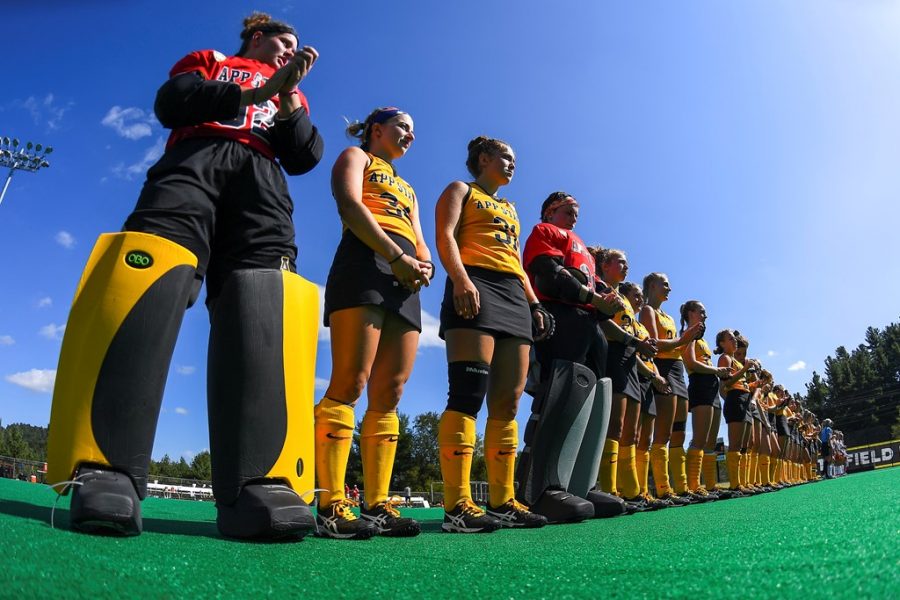 As a member of the Mid-American Conference, App State's field hockey season has been postponed from the fall to the spring.

The Mid-American Conference announced the postponement of all fall sports on Aug. 8 due to the pandemic. While most teams at App State are part of the Sun Belt Conference, field hockey is a member of the MAC. Postponed sports are planning for spring competition, but with the ever-changing status of the pandemic, nothing is certain.

“It was a tough day for sure,” senior midfielder/forward and team captain Meghan Smart said. “Everyone that I was with called their parents right away. A lot of us cried. We didn’t do anything for the rest of the day, just trying to process what was happening.”

The players found out about the news at different times and in different ways, which further complicated the situation.

Sixth-year head coach Meghan Dawson texted in the team group chat about an hour before the MAC posted its official statement, saying she was going to be sending out an emergency Zoom link within the next five minutes.

Half of the team, including Smart, joined the Zoom call to hear the news from their coach together, but the other half of the team was out on an adventure to Compression Falls without reliable cell service.

Senior midfielder/defender and 2019 first team all-MAC selection Annette Jarosz was part of the group out hiking when the news of the postponement broke.

Jarosz said the group at Compression Falls was in good spirits but tired after making the climb from the falls back up to the parking area. One of her teammates received a text from a friend saying something along the lines of “Hey, I just heard, I’m so sorry about your season.”

“That was the only thing that got through, so we were all kind of panicking,” Jarosz said.

The group got in their cars and began the 40-minute drive through backroads to get back to Boone and better reception. Eventually, one of the phones got service and they were able to read the messages from their coach.

“We were all kind of just in shock, just because we weren’t really expecting it on a Saturday morning,” Jarosz said.

Dawson said she found out the news through social media, rather than through official communication from the MAC. Someone in the group chat of MAC field hockey coaches sent a leaked source saying that MAC football had been canceled.

“As an Olympic sport coach, you know that if football is canceled, you’re definitely getting canceled,” Dawson said.

After receiving the info from the leaked source, she got on the phone with Athletic Director Doug Gillin and a support administrator to try to find out if the report was true.

“I wanted to try and be the one that tells our team, because this is heartbreaking news when they’ve been training all summer and all spring to try to be as prepared as possible for our season and to compete at the highest level,” Dawson said.

Dawson said she felt especially bad for the seniors when she heard the news of the postponement.

“When you hear that news, you just think of like, this is their senior year,” Dawson said. “With Olympic sports, there is no playing like this at the next level unless you go onto the national team. This is kind of like what you do all those years for.”

In 2019, the App State field hockey team had their most successful season in over a decade, finishing with the most wins in a season since 2003, to be exact. The Mountaineers opened the season with a six-game winning streak before finishing the year at 11-9.

In the 2019 MAC tournament quarterfinals, Smart scored the game-winning golden goal in overtime to give App State a 5-4 win over Ohio. Although they fell 2-0 to Miami (Ohio) in the next round, it marked the third straight year the Mountaineers reached the semifinals of the tournament.

The 2020 roster features returning leadership and experience from that 2019 team: eight of the nine players that started in at least 15 of the Mountaineers’ 20 games last year are returning.

“We were so ready. We were training hard in the spring, we were ready to take it to the next level,” Smart said. “Especially as seniors, we’ve grown so much and helped grow this program to be the best that it’s ever been. This year was the year that we were ready to become MAC Champions.”

Jarosz felt similarly. She pointed out how the year before she arrived on campus, the team only won one game the entire season.

From going 1-15 in 2016 to 11-9 last season, and with the number of key players returning for their senior seasons in 2020, the team was excited to get on the field and compete.

“We thought this was definitely going to be our year,” Jarosz said. “Everyone was really excited, everyone had bought into the program and everyone was committed. So it’s frustrating that it got pushed back, especially with it being our senior year. This is our last chance.”

The plan, as of now, is for the season to take place in the spring. Until then, the Mountaineers will continue working at what they love.

“They’re resilient, they’re already back on the field having fun with each other,” Dawson said. “No coaches are out there telling them they have to. They’re out there because they love it, and I think that’s really cool.”