Weekend shut out for women’s soccer 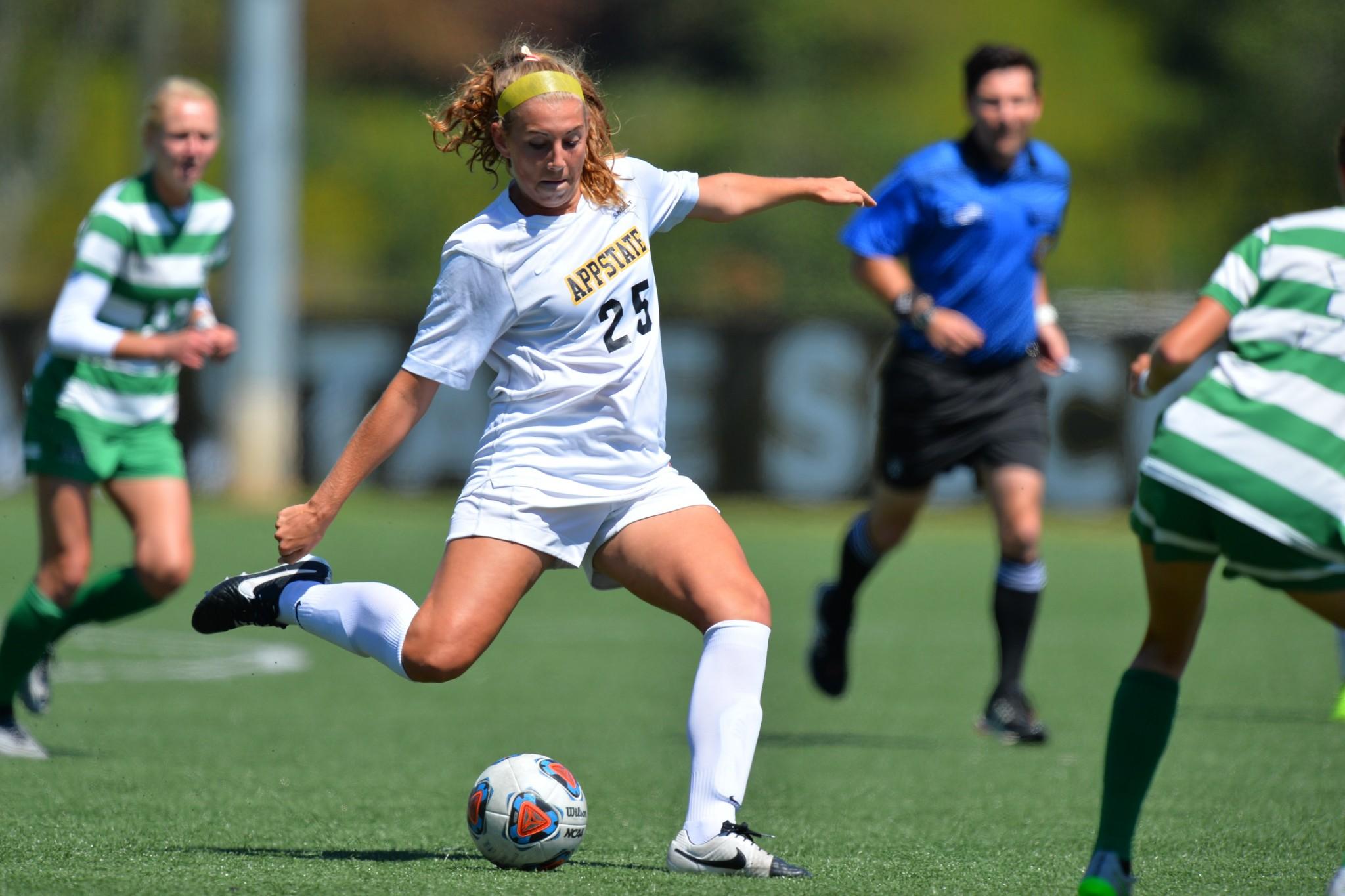 The Appalachian State women’s soccer team (4-2) started their weekend on a high note with a solid victory against previously undefeated High Point University (4-1-2).

It took a full team effort to keep the High Point Panthers’ aggressive offense from putting the ball in the back of the net, but the Mountaineers were able to create a lot of movement off the ball in order to get the 1-0 win.

The first half of the game saw a lot of action in the middle of the field because of High Point’s high defensive line.

Senior midfielder Jenni Loveless controlled the middle of the field for the Mountaineers and created several opportunities for the offense.

One of their best opportunities came off of a free kick in the last minute of the first half. Senior forward Jenn Bass took a hard hit in the middle of the field and earned the kick for the Mountaineers. Sophomore midfielder Morgan Mosack was able to get a head on the ball and almost scored, but a deflection by a High Point defender kept the ball from going in.

Despite a scoreless first half, the Mountaineers came out fighting in the beginning of the second half.

The team moved off of the ball well, and senior defender Merlin Beckwith intercepted a Panther pass and took the ball up the field. Beckwith slotted the ball through the Panther defense to senior forward Sam Childress, who shot far post to get the goal for the Mountaineers in the 11th minute of the second half.

“We always know Merlin tries to get into the attack, so we try to use that to our advantage,” Childress said. “Merlin took a player on, and they left me onside, and she just slotted me in. I was almost a little too calm under pressure, but fortunately it hit the post and took a good bounce for me.”

This early second half goal came as a confidence boost for the Mountaineers and helped them keep the intensity up.

“[Scoring early] definitely puts pressure on our team, but it’s a good kind of pressure,” Loveless said. “It’s a pressure that every ball matters and, you know, every 50/50 ball matters, and every sprint matters. It keeps the pace of the game up, and it keeps everyone’s intensity up.”

The Mountaineers held their composure for the rest of the game in order to keep the Panthers off of the scoreboard. This was a huge victory for the team who sees High Point as one of their biggest rivals.

“When we play High Point it’s always a defining game for us, so I think the fact that we beat an undefeated team really shows what we’re capable of,” Bass said.

In their game against the Marshall University Thundering Herd, the Appalachian State Mountaineers fought long and hard in their defensive third in order to keep the Herd from scoring and ended the game with a 0-0 tie.

The Herd had been averaging 20 shots per game so far this season, and were riding on a six-game winning streak, but the Mountaineers were able to break the streak. Behind the defense, senior goalkeeper Megan Roberson had nine saves and earned her second shutout of the weekend.

“Megan was great off her line today,” head coach Sarah Strickland said. “She made a couple of great saves that were outside the box. It’s great to have that rock in the net.”

The Mountaineers created a few scoring opportunities in the first half of the game, including a combination play from Mosack to freshman forward Kat Greer.

“We did a good job of stepping and squeezing,” Fletcher said. “That’s something that we had been working on. We were just passing off players back and forth, making sure that everyone was covered.”

Despite the fact that Herd had the ball in Mountaineer territory for most of the second half, the score remained 0-0 and the game went into overtime.

The Mountaineers had multiple shots in overtime, but were unable to find the net.

Senior goalkeeper Megan Roberson said the team must work on finding that offensive spark to put them above their opponents.

“I think for us, it’s going to be putting the ball in the back of the net,” Roberson said. “Any game that we’ve lost or tied, it’s been that we just haven’t scored. I think we’re creating great chances, but it’s just going to be finding that one shot.”

The Mountaineers showed one final burst of energy in the 22nd minute of overtime when Fletcher attempted to volley a corner kick into the goal, but the ball was deflected by the Herd and the game ended in a tie.

Even though it was not the result that they had hoped for, the Mountaineers saw the game as something to be proud of.

“Obviously if we could finish that would be great,” Strickland said. “It’s weird because soccer is one of the few sports that you can tie in, and it doesn’t have to be a win or a lose. But for us even a tie against a team is a good result.”