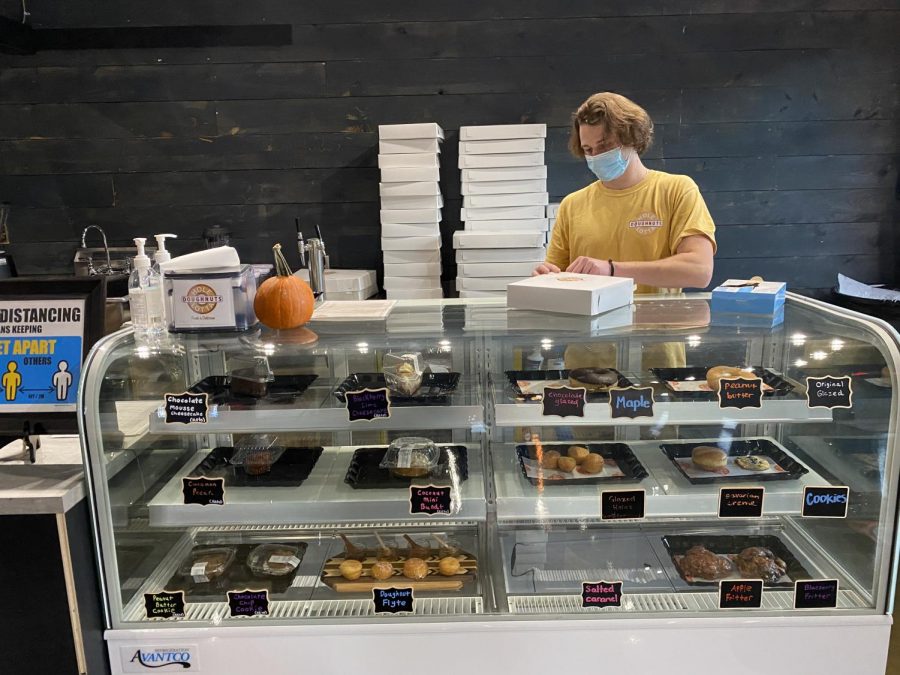 Nick Cellini prepares an order behind the counter at Hole Lotta Doughnuts on King Street. The West Jefferson-based shop opened this fall in Boone after popular demand from customers.

The West Jefferson-based doughnut shop Hole Lotta Doughnuts expanded its business to King Street this fall. The store is a long-requested expansion among High Country locals since the company’s inception in January 2019.

“A lot of local people know us from West Jefferson,” said Harrison Tilley, Hole Lotta Doughnuts general manager. “It’s only about 20 miles down the road. There’s been a lot of people asking us to come to Boone.”

The Boone store is one of three expansions Hole Lotta Doughnuts made in 2020, including a relocation in West Jefferson and a new store in Lenoir.

In a season when many businesses have closed down, the pandemic offered Hole Lotta Doughnuts the time and space to build in all three locations, Tilley said.

“We want you to have a good doughnut, but we’re also after the experience,” Tilley said. “That’s how it is at all Hole Lotta Doughnuts locations, but when you think ‘Boone,’ King Street’s the main thing. We wanted it where everybody in Boone could enjoy it, from locals to students to tourists.”

Hole Lotta Doughnuts’ baked goods menu is rotational, offering different treats every day. The shop’s doughnuts are made from scratch, and it takes two and a half hours from when the dough begins preparation to when they serve the doughnuts, Tilley said.

The store’s menu also contains a rotation of gluten-free and ketogenic-diet-friendly options.

The store is spacious and offers ample seating options for patrons to study, read a book or chat with friends. Hole Lotta Doughnuts is one of only two cafe-style locations in downtown Boone with indoor seating going into the winter.

Customers have already begun frequenting the shop for their snacking and studying needs since its opening November.

“I like the variety that the store has, and the customer service is super friendly,” said Medie Weir, a Hole Lotta Doughnuts customer.