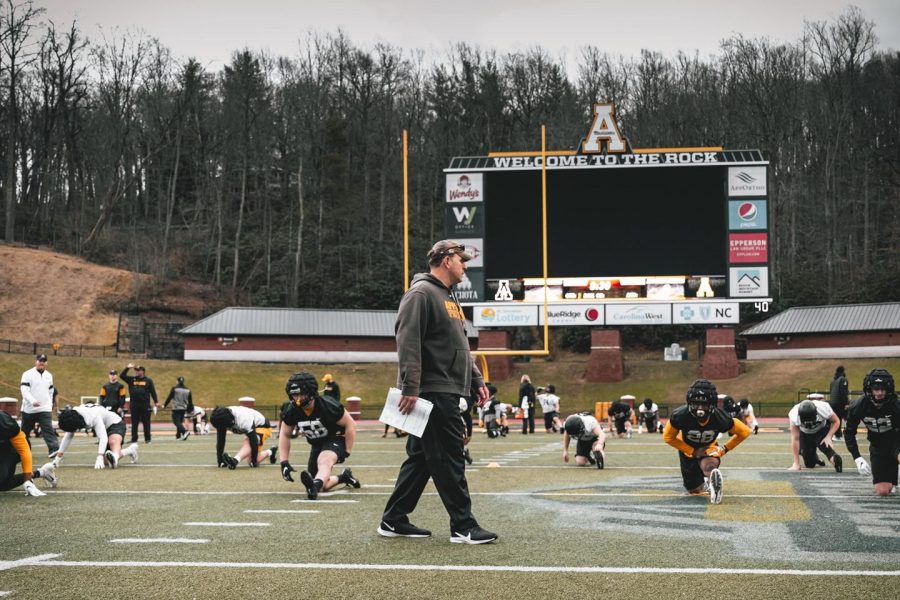 App State football began preparing for the 2020 season with the start of spring practice on Feb. 18.

After a historic 2019 in which the Mountaineers went 13-1, won their fourth straight Sun Belt title and fifth straight bowl game, first-year head coach Shawn Clark and his team have shifted their focus to 2020.

“I’ve been satisfied so far with our effort,” Clark said. “We had a lot of enthusiasm. Every day, someone (is) coming out and improving their craft.”

After winning the New Orleans Bowl on Dec. 21, the Mountaineers enjoyed some time off, but junior wide receiver Thomas Hennigan is happy he’s back on the field with his teammates.

“It definitely snuck up on me, I feel like just yesterday we were back in New Orleans playing the last game,” Hennigan said. “Now, quick turnaround, new staff, but I’ve always loved practice, so I’m excited to be back out there.”

This spring, keep an eye on the battle for App State’s starting running back position. The opening was created after junior Darrynton Evans, the 2019 Sun Belt Offensive Player of the Year, declared for the NFL Draft in December.

Junior Marcus Williams Jr. and sophomore Daetrich Harrington served as Evans’ primary backups in 2019 and are both expected to take on larger roles in the Mountaineer offense in 2020. Redshirt freshman Camerun Peoples is also expected to play a key role out of the backfield in 2020, but is sidelined for the spring as he continues to rehab a season-ending knee injury that occurred in the team’s 2019 opener vs. ETSU.

“I think we’re running the ball really well with the first group, which we should. We’re an experienced group with five starters up front (and) two really good running backs,” Clark said.

All five starters on App State’s offensive line are set to return in 2020 and Harrington has been impressed with what he’s seen from them this spring.

“The O-line, they’re doing awesome,” Harrington said. “They handle everything up front, make huge holes for the running backs to just do what they can do.”

As for the battle for the starting running back position, Harrington stressed the importance of controlling what he can and supporting his teammates.

“It’s all love at the end of the day,” Harrington said. “We really don’t (talk) too much about it. Whoever gets it is gonna get it, (we) just continue to work.”

After suffering a torn ACL in the spring of 2018 that forced him to miss the first nine games in 2018 and a lower-body injury in 2019 that sidelined him for six games, Harrington is happy he’s back on the field and healthy.

“It feels great,” the Douglasville, Georgia native said. “I feel like God got a bigger plan for me, everything happens for a reason, so I don’t even dwell on the things that happened in the past. I just continue to move forward and just think about how I can become better and keep working hard and keep my head down no matter what happens.”

“Us players, we push each other, so when we maximize the competition within each other, it kind of brings out the best in us,” Jean-Charles said. “If we think one guy is slipping, the next man steps up and pushes him and vice versa. That inner-competition is a big thing for us, to just block out outside noise and focus on us as a group.”

For the third year in a row, the start of spring ball is also a time to adjust to a new coaching staff and playbook. Former head coach Scott Satterfield left App State to take over at Louisville in 2018 and Eliah Drinkwitz left for Missouri in 2019.

Even after accomplishing so much in 2019, the Mountaineers are heading toward the 2020 season hungry as ever.

“Basically, we just gotta forget about last year and set our new goals for this year and work toward those,” Harrington said.

He said the team’s goals for 2020 are to go 14-0 and earn a New Year’s Six bowl appearance as the top ranked Group of Five school in the country.

For Jean-Charles, his goal is simple.