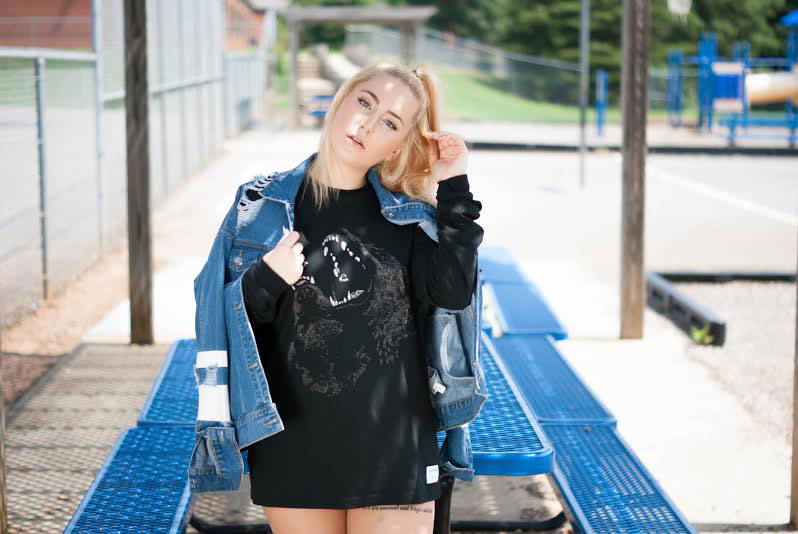 Colburn started “WildOne “in July 2015 with the intent to motivate adults in their 20s to “revive and awaken a kind of self-uniqueness.”

“I wanted my brand and blog to reflect something wild and out there because that is how I am as a person,” Colburn said. “I thought the movie was rad and thought WildOne really fit with how I wanted to brand myself.”

Colburn’s commitment to the brand and blog is apparent from her new tattoo, depicting a frowning face with a halo, which is the logo for “WildOne.” The logo was inspired by ILoveMakonnen’s album cover for the single “I Like Tuh.”

Colburn said that the logo represents how people spend their lives being good and living by the rules but then ultimately live with regret.

“It is a little reminder I would rather live reckless than with regrets,” Colburn said.

The “WildOne” blog aesthetic is anything from street wear to ‘90s throwback apparel. Colburn wants to promote freethinking through affordable fashion; her price range is from $5 at a thrift store to $70 on a website like Dolls Kill.

Colburn’s fashion icons include Natalie Weaves, a Los Angeles-based model, Jeremy Scott, the creative director of Moschino, and hip-hop and rap icons such as A$AP Rocky and the A$AP Mob.

“A$AP Mob and A$AP Rocky are iconic to me because they brought this ‘sophisticated street’ style to the mainstream, which I think is amazing,” Colburn said.

Addison Wemyss, a junior commercial photography and public relations major at Appalachian State is the photographer for “WildOne.”

“Julia and I are at points in our lives where we are starting to grow our own personal brands and businesses while attempting to profit from them,” Wemyss said. “It was a win-win to photograph for her blog because as she grew her own blog, I grew my own portfolio. We both helped each other out as we are getting a feel for the real world.”

Colburn is currently working with VFiles, a fashion social networking company based out of New York City.

She plans to move to L.A. next year and attend the Fashion Institute of Design & Merchandising to expand her network for “WildOne.”