How the win at “The Big House” changed college football 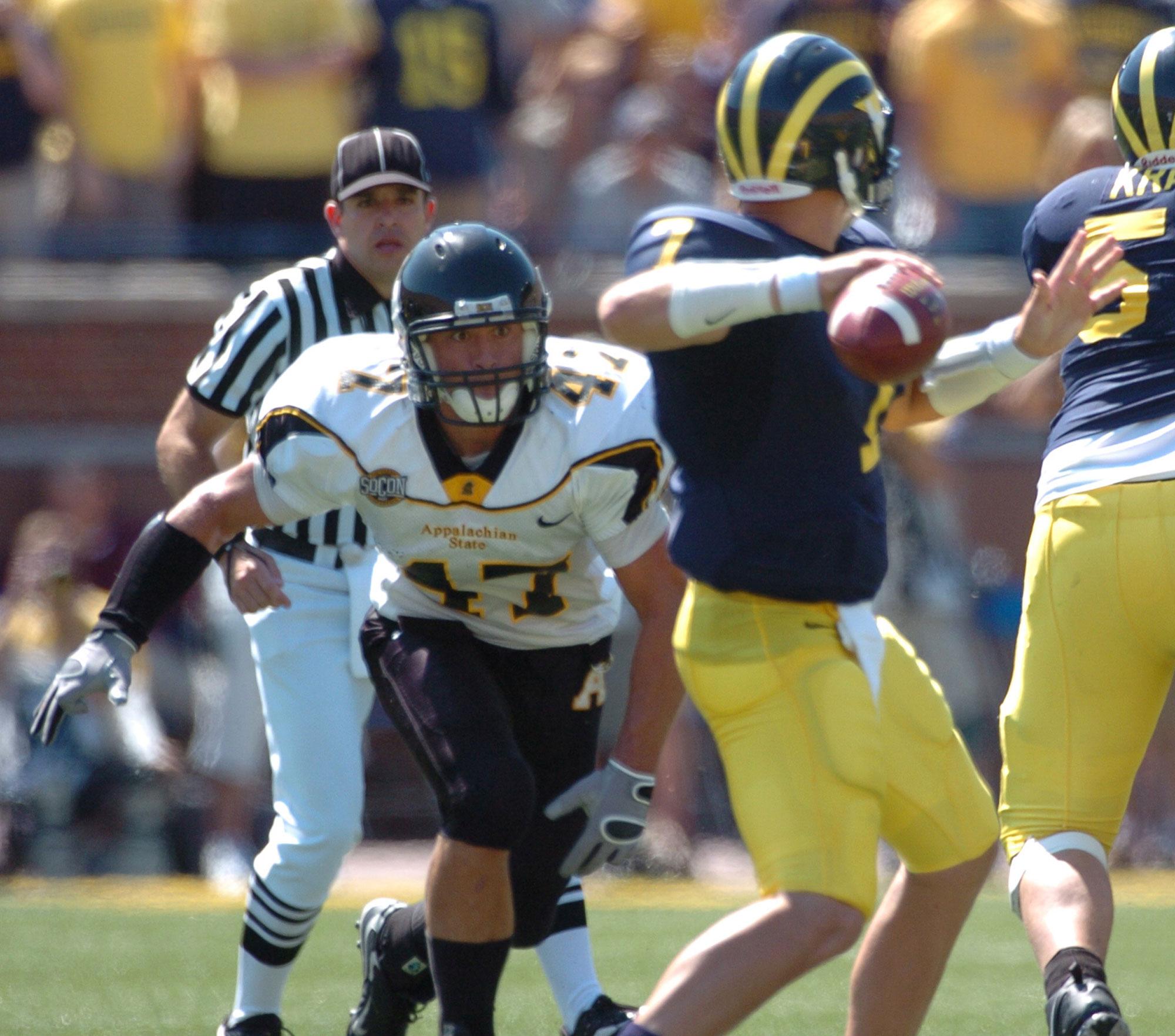 On Sept. 1, 2007, nearly 10 years to the day that I sit down to write this piece, the Appalachian State Mountaineers walked fearlessly into ‘The Big House” in Ann Arbor, Michigan to face the Wolverines, ranked No. 5 in the Football Bowl Subdivision.

While the Mountaineers were ranked No. 1 in the Football Championship Subdivision after winning their second-straight FCS National title, they were virtually unheard of in the world of big time college football, and completely underestimated.

Quotes from “Remembering an Upset for the Ages,” an ESPN article from 2014, show that even Wolverine players were not taking the game seriously.

“I had never heard of them. Even watching their film, it was really grainy and bad quality…I personally wasn’t worried or concerned about the game,” former Michigan receiver Greg Matthews said.

“I had some friends who played in the same league as them, so I knew they had a lot of athletes,” former Wolverines running back Carlos Brown said. “But it never crossed my mind that they had a shot at beating us.”

Most people know the story that comes after.

With the score 34-32 in favor of App State, and six seconds on the clock, Michigan placekicker Jason Gingell came in to kick what would have been the game-winning field goal for the Wolverines.

The ball was snapped, the kick was up and at the very last second, Mountaineer defensive back Corey Lynch stuck up his right hand and blocked the ball back, to shock the entire world of sports for years to come.

It was the first time ever that an FCS team defeated a ranked FBS opponent.

In the 10 years that have passed since that fateful day, countless articles have been written commemorating the historic game.

YouTube videos of the final play and highlights have amassed over one million views.

A 2014 quote from Lynch really seems to sum it up.

“I still hear about that game an absurd amount,” Lynch said in an interview with ESPN. “Pretty much daily. If I keep hearing about it everyday, seven years later, it must have been a pretty big upset.”

I would argue that the game greatly changed the world of college football and certainly altered how the game would look today if the victory had not occurred.

Not just for the Mountaineers or the Wolverines, but for teams at both the FBS and FCS levels.

In terms of the game’s direct effect on Michigan, the Wolverine program was one of the nation’s premier destinations for recruits, posting a .774 win percentage in 124 games in the 10 years before the play, including a national championship in 1997.

In the years since their loss, the Wolverines have won less than 60 percent of their games and changed head coaches three times.

To put this in perspective, it took Michigan 38 years to change coaches three times before the retirement of Lloyd Carr, who held the position in 2007.

Since defeating Michigan, the Mountaineers have posted a win percentage of .715, claimed six conference titles (five Southern Conference, one Sun Belt), won the 2007 NCAA Division I-AA Football Championship and were victorious in the school’s first two bowl appearances in history in 2015 and 2016.

With the program’s transition to the FBS level, they have produced a record of 20-4 in three seasons, with only Clemson, Alabama and Ohio State winning more games in that time.

In 2015, App State became the first program in history to earn a bowl appearance in its first season of bowl eligibility.

For college football as a whole, it has brought a much larger amount of attention to the FCS level than ever before.

It has opened the door for more big programs to schedule the little ones, allowing for more upset games to follow, such as when James Madison defeated No. 13 Virginia Tech 21-16 in 2010 and when FCS powerhouse North Dakota State defeated No. 20 Iowa in 2016.

The “Upset in the Big House” has spawned articles to be written, such as ncaa.com’s “6 potential FCS over FBS upsets to watch out for in 2017,” a concept unheard of in 2007.

It was one of the first events of note to be broadcasted exclusively on The Big Ten Network and helped the network get off the ground successfully.

Reported on Aug. 27 of this year by the Orlando Sentinel, The Big Ten Network is the second largest national network in college sports, valued at $1.142 billion.

With the increase in coverage of those teams since the game in Ann Arbor, more players are aware of talented FCS programs where they might shine, in comparison to FBS teams where they may be forgotten in a pool of talent.

The landscape of college football would look much different without App State.

The hype that these former “throwaway” games now receive and the respect that smaller programs have earned would not be possible without the Mountaineers.

It is certain that today’s Mountaineers would not be possible without the win in “The Big House,” with the fame gained through the historic victory playing a huge part in the setup of a potentially great program at the FBS level.

“The evidence is how it endures 10 years later,” former football Sports Information Director Mike Flynn said. “I can only think of a couple of college football games off the top of my head that have that same kind memory power to it. The Boston College win on the Flutie Hail Mary against Miami. There aren’t many more. It changed Appalachian football forever, and it may have changed Appalachian State forever for the better.”

Brooks Maynard is a senior journalism major from Raleigh, NC. You can follow him on twitter @BrooksMaynard