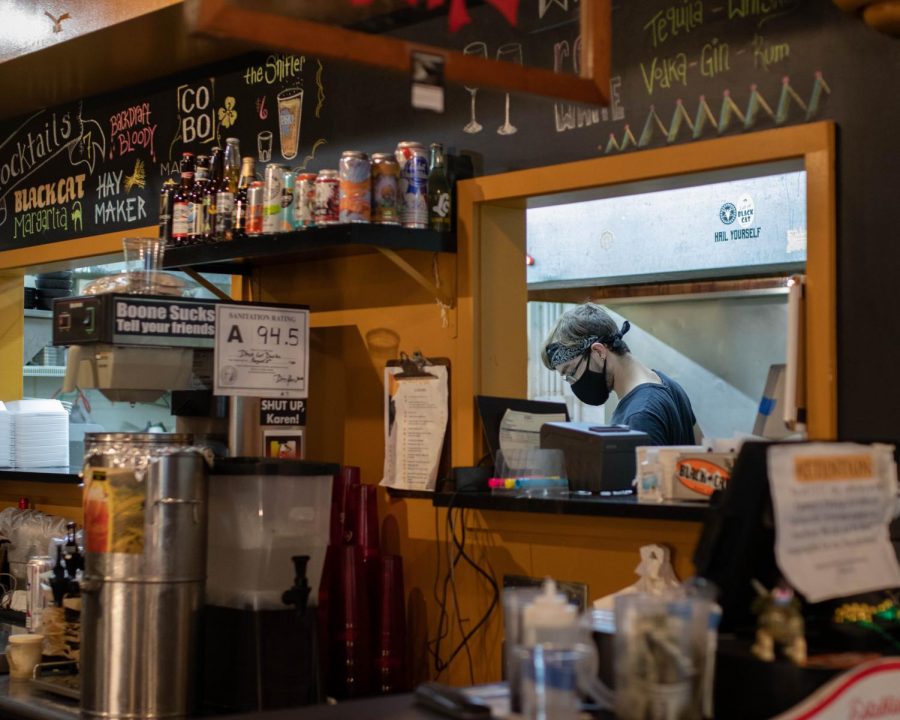 Capacity and staff needs haven’t changed much, stated General Manager Colin Swaney of Black Cat Burrito, as the restaruant’s physical size is small and take-out orders have made up for any lack of dine-in customers. However, they continue to “play it by ear, week by week,” Swaney continued, as the visitor population has declined.

Football is not just a game in Boone, it’s a business, and local restaurants felt the impacts of COVID-19 on the sport.

“Coming in for an evening shift, it’s normally pretty slow, but on game days specifically, we would have a packed house. We’d have people waiting out the door,” server/manager at Our Daily Bread Mackenzie Hemphill said. “Not having those game days, our numbers have gone down tremendously.”

App State football has long been a core value of the Boone community, drawing thousands of fans and alumni to Boone every game day. These fans don’t only attend the games, they spend money eating and shopping in Boone. A lot of these businesses have long depended on game days to bring in a level of profit much higher than any other days of the year.

Black Cat Burrito, located on South Depot Street, is one of many local restaurants that felt a direct impact from the lack of fans during the football season. An employee there described game days as their most busy and profitable days of the year, calling them “incredibly lucrative.”

“Game days do still drive some sales, but we’re down at least 30-40% from what we would normally do,” Black Cat Burrito employee Colin Swaney said. “We can still have a good Saturday, but it’s nothing like we used to. Game days would be the top 10 busiest days of the year, without fail.”

Our Daily Bread, a restaurant on King Street, has also been greatly impacted by the lack of fans in Boone for game days. Management cut servers’ hours because the restaurant is much less crowded, operating at half-capacity due to the coronavirus.

“Servers would be making hundreds of dollars, and now that we don’t have those game days, it’s impacted our income tremendously,” Hemphill said. “We would have a full staff, we would have several servers, and now, we only have four or five during our lunch rushes. We’ve had to cut back on server hours and also servers aren’t making as much.”

At the heart of the issue is the novel coronavirus. After all, that is the reason for empty stadiums and arenas across the country. Many restaurants have been operating at limited capacity to discourage the spread of COVID-19, but this comes with financial repercussions.

“It is important to remember that not only are we hampered by the 11 p.m. curfew, we are also limited to half capacity,” Boone Saloon owner Kelly DuPree said. “And as a matter of fact, we voluntarily lowered The Gamechanger occupancy to 27% because we assessed that even at 50% occupancy, responsible social distancing was not possible.”

While the negatives of fewer people and less profit certainly loom large, several businesses have found positives despite their current setbacks.

“Less of the chaos,” Swaney said. “You’ve got to deal with less drunk kids trying to sneak beer into the restaurant.”

But there are lasting effects that go beyond the well-being of a business. The workers at many of these businesses have experienced considerable decreases in their income, leading to personal financial struggles.

App State played its first home football game with limited capacity on Oct. 22. Many businesses hope that this will bring in larger crowds but know that it will be nothing near a traditional game day.