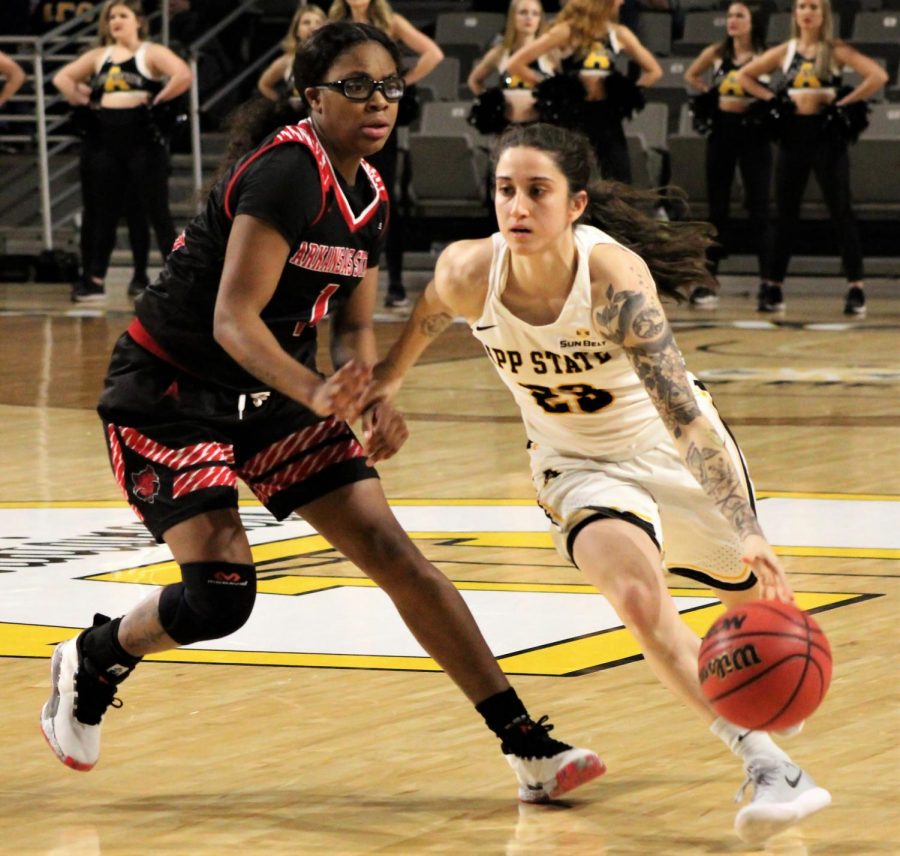 Junior guard Ashley Polacek avoids a defender and drives the lane for a basket during their victory over Arkansas State on Jan. 24. Photo by Megan McCulloh, Staff Photographer.

After starting January with a 2-2 record that includes a home win over South Alabama and one on the road against Texas State, the women’s basketball team returned to the Holmes Convocation Center for a three-game home stand of Sun Belt matchups.

Before the stretch of home games got started, head coach Angel Elderkin said she was happy the team was back in Boone.

“The home games are really important and we have ‘the Arkansas’ coming in, which traditionally that’s where the Sun Belt has gone through,” Elderkin said. “It’s also nice when we just started school that we get two weeks in school to get our routine back before we have to hit the road again.”

The Mountaineers carried the momentum of their win over Texas State into comfortable victories over Coastal Carolina and Arkansas State to start things off. Senior forward Madi Story had more than 20 points in both games while junior center Bayley Plummer grabbed a total of 32 rebounds, including 17 in a double-double effort against Coastal Carolina.

To finish the stretch the Mountaineers had a visit from Sun Belt Conference leader Arkansas-Little Rock. Unlike their previous two matchups, they struggled offensively and shot only 32 percent from the field through the first three quarters. The team played better in the fourth quarter, but by then it was too late, suffering a 15-point loss, 74-59.

Even with the loss to the Trojans, Elderkin was pleased with the way the homestand went.

“When I look at the top of the Sun Belt, we just went through it and we finished with a winning record,” Elderkin said. “Obviously we’ve got to win games on the road but we’re right there with those teams.”

With their loss to Little Rock, the Mountaineers’ overall record drops to 10-8 with a 4-3 record in the Sun Belt, good for fourth in the league out of 12 teams. Story said she felt that it was the Trojans’ near-perfect execution in the ‘little things’ that made the difference.

“Before this game, we would have really good points and really bad points,” Story said. “But Little Rock capitalized on our mistakes and other teams haven’t done that.”

“It definitely comes down to details. We’ve really got to lock in offensively (and) defensively,” Polacek said. “We had three wins in a row, so we’ve just got to keep up that grind.”

After facing off with the Louisiana Ragin’ Cajuns in Lafayette on Jan. 31, the Mountaineers will travel a little farther north to Monroe to take on the UL-Monroe Warhawks before returning home on Feb. 7. App State has 11 Sun Belt games left before tournament play begins, and Elderkin thinks it will be a fight to the finish.

“It’s two to three losses from third place down to ninth or tenth place (in the Sun Belt),” Elderkin said. “And on any given night, any of those teams are going to beat each other. I think it’s going to make for an interesting finish.”