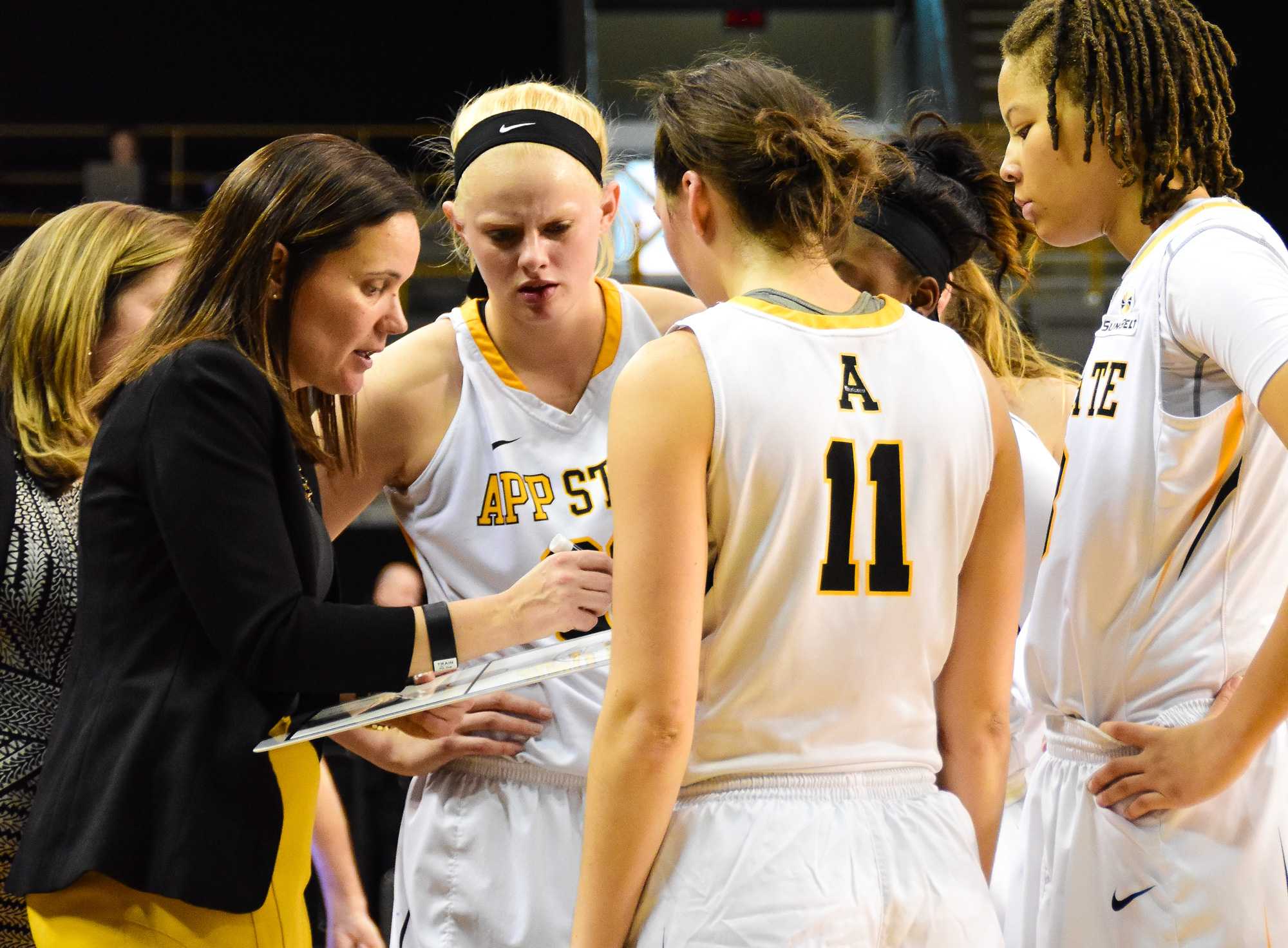 Womens basketball Coach Angel bringing the team into a huddle during their final game of the season against ASU on March 5th. Photo by Lee Sanderlin.

When the clock hit 00:00 on March 9 against Arkansas State, Appalachian State’s women’s basketball season was officially over.

With a record worse than last season’s by four games and a first round loss in the Sun Belt Tournament to Arkansas State for the second straight year, positives would be hard to come by for most teams.

But that is not the case with the players and coaches. Both saw the team grow, improve and gain experience this season and look forward to the start of next year.

“Some of the things we were able to do with this team I was really proud of,” head coach Angel Elderkin said. “However, if we would have given more of a consistent effort I think that it would’ve translated into a couple more wins. We gained valuable experience, so when you look at us moving forward for next year, it’s really exciting.”

Whether it was injuries or inexperience to lack of consistency, players said the team faced a lot of adversity this season. Junior forward Mia Marshall said that adversity helped the team in the long run.

“Sometimes walls are put in front of you as challenges and people will see it and take it as a sign like, ‘I need to turn around. Obviously I’m doing something wrong,’” Marshall said. “But with our team, something that really stuck with me is, ‘Delay is not denial.’ Although that wall is in front of us, it just gives us something to work towards.”

One thing that the team learned this year was how important speed was to their playing style. In their victory against Troy, the team had over 100 possessions, a trend that continued for the rest of the season. Whenever the team had a high number of possessions, they were in a much better position to win.

“When we played fast, we were successful,” Elderkin said. “We’ve got to train our team right now to be able to play that fast.”

Playing at that speed will require players to put in a lot of work in the offseason.

“You may think you’re working hard, but there’s people out there that are working just as hard as you are,” Marshall said. “So when you step on that court, always give your all.”

Elderkin’s style includes playing and practicing with speed and passion. Players have picked up and embraced her influence.

“I’ve learned from her a lot about heart and passion,” junior forward Ashley Bassett-Smith said. “She gives everything she has to the team, and it inspires you to want to dive on the floor and get those extra rebounds and hustle plays. She’s really instilled that in our team. In the future, it’s gonna be a legacy that we leave that you don’t step on the floor unless you’re ready to give everything that you got.”

The players feed off Elderkin to work on that up-tempo style of play.

“Her love for the game is something that resonates with everyone,” Marshall said. “If you can’t feel it when she’s in there talking to us, this is not the game to play. This is not where you should be. Her passion is something that is undeniable. It makes you want to go out there every day and give 110 percent, not just 100.”

While the fast-paced offense is still a go-to for Elderkin and her coaching staff, the team worked to come up with a defense that deviated from Elderkin’s typical man-to-man.

“Our defense definitely struggled early on in the season and through mid-season, but now we’ve finally come into our own, running this type of matchup-zone sagging-man, and that’s been working for us,” Marshall said.

Elderkin said that the team had more success guarding the better athletes in the Sun Belt with the new defense.

Late in the season, with that new defensive scheme in place and needing two wins to get into the conference tournament, the Mountaineers headed to Georgia in search of those victories.

The team beat Georgia Southern and Georgia State in back to back road games, the first time the Mountaineers won two road games in a row all season, guaranteeing a spot in the tournament.

“These were the determining games of our season, so we bought into the game plan, and we gave it everything we had,” Bassett-Smith said. “We made sure we had the hustle plays and second chance points, and we pulled out some victories.”

While those would be the last wins of the season for Appalachian State, they give the team confidence heading into next year, which will see five new faces on the team.

The Mountaineers had their first team meeting for next season March 16, and in it, for the first time since she has been a coach at Appalachian State, Elderkin spoke of championships, despite the subpar 2015-2016 campaign.

Elderkin, who believes that championships are won in the offseason, said that part of the routine for the upcoming season will be to watch the final minute of the Sun Belt Championship from this past year.

“Our mentality now is going to be, every time we get together to train, condition, [lift] weights, [and practice] on the court, we are training to beat the best team in the Sun Belt,” Elderkin said.