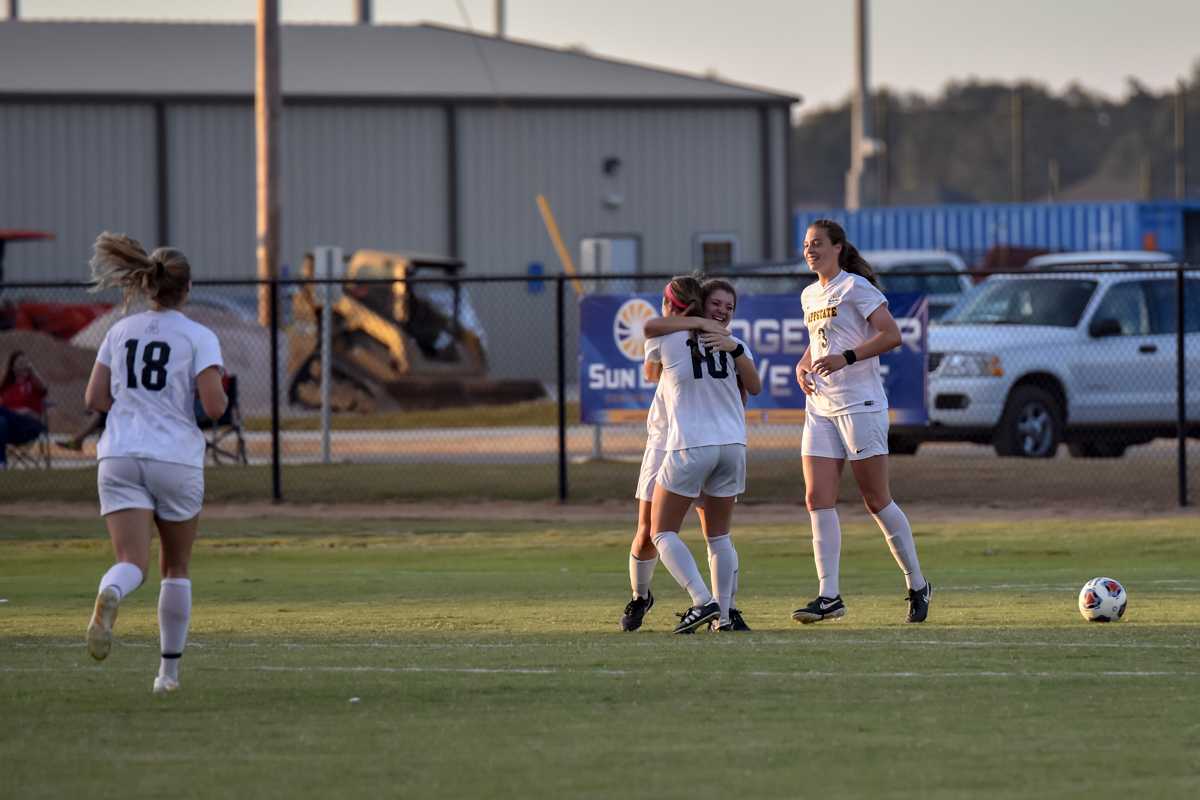 Entering the Sun Belt Conference Tournament with the second longest winning streak in the conference and winning four of their last five games, the No.4 seed App State women’s soccer team extended their winning streak to four games and advanced to the semifinals for the second straight season with a 3-0 win over No.5 seed UL Lafayette.

Beating the Ragin’ Cajuns 2-0 just two weeks ago in a cold, rainy game, the Mountaineers wouldn’t let the warmer weather make a difference after a dominating first half and a three goal second half to soundly defeat the Cajuns.

“It is just finding your rhythm traveling a long way with a new environment,” head coach Sarah Strickland said. “We just had to relax and tell ourselves this won’t be our last game and that we would walk out saying we were proud of the performance we put on the field, which we did.”

Controlling the ball for a majority of the first half, the Mountaineers led the first half shot count 10-3 but were unable to get anything in the net with a strong performance by ULL’s goalkeeper Cosette Morche who had six first half saves.

“I think we just caught up in their level of play which is very direct and ours is more progression oriented,” senior Jackie Nieradka said. “We kind of realized that we need to get back to our game and we started playing the way we like to and really came together in the second half.”

Building up their shot count, App worked on getting in the Cajuns’ head causing them to be called for seven first half fouls and a yellow card.

“I think we played very composed and relaxed and when we started to attack their team they began to get frustrated,” redshirt junior Erin Settle said. “They just started fouling because they couldn’t keep up with intensity.”

Not only did the Mountaineers pressure on defense but the Cajun’s focused on pressuring Sun Belt Offensive Player of the year, senior Jane Cline making it difficult for her to get open space.

“I think any team at this level and with this much at stake will have high pressure and they know Jane [Cline] is a threat and everyone does,” Nieradka said. “We expected them to body up on her and me and Erin [Settle] had to support her more by getting open.”

Tied in a scoreless game at the half, Nieradka found her opening in the 57th minute and scored the first goal of the game with an assist from Cline and senior Jenn Bass to make it a 1-0 game.

Eight minutes later, Settle had her opportunity and built on the lead making it 2-0 with an assist from Nieradka.

“Jackie [Nieradka] got the ball in the middle and I made the run and I took a deep breath and saw the keeper and just played it in the bottom right corner,” Settle said.

Her seventh goal of the season, Settle was just happy to be able to be on the tournament field after missing last season with her second torn ACL.

“It was one of the best feelings aside the double overtime win against South Alabama last week,” Settle said. “I have been waiting for this [opportunity] and I am definitely blessed to finally have this opportunity. It was really hard for me not playing last year and watching freshman year so I just play for App, my coaches, the crowd and God.”

Having a cushioned lead, freshman Maggie Hanusek, who scored her first career goal last week against South Alabama, put the icing on the game with another impactful goal making it a 3-0 game in the 76th minute.

“It is probably one of the best feelings I have ever felt in my entire life,” Hanusek said. “Getting two goals in two very important games is indescribable.”

Advancing to the semifinals for the second straight year, the Mountaineers will now face a familiar foe in South Alabama who eliminated them in the same round last season in penalty kicks.

Despite beating the Jaguars last week in double overtime, the Mountaineers have been waiting all season for the opportunity to get back to the semifinals and advance to the Sun Belt championship game.

“It is awesome and we have even more confidence this year than last year being on a four game win streak,” Nieradka said. “We hit our peak at the right time and we have the same schedule we had a week ago [ULL and South Alabama] so hopefully we can reach our goal.”

App State will face off in the semifinals against South Alabama on Friday at 8 p.m. The winner will advance to the Sun Belt Championship game on Sunday.