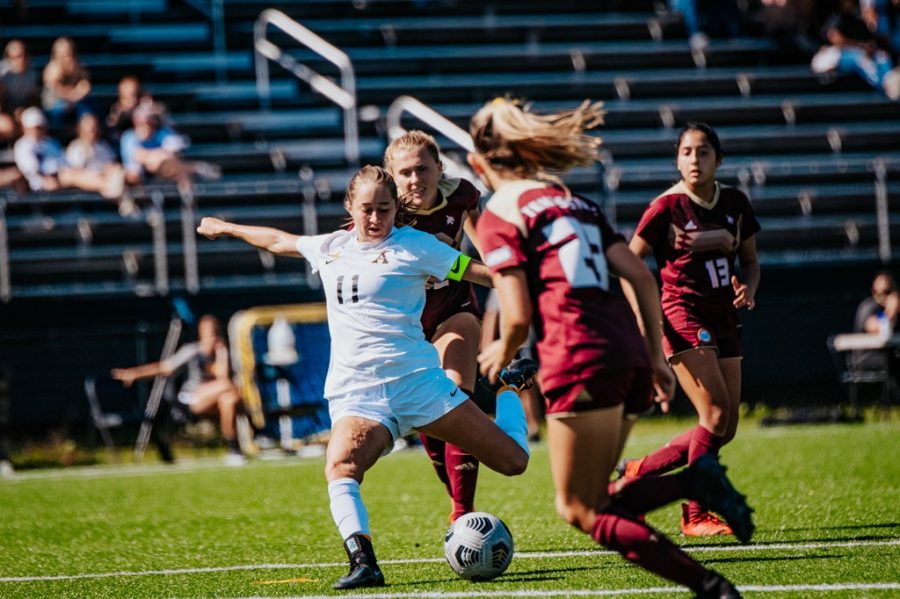 Junior defender Olivia Cohen strikes the ball away from three Bobcat attackers. Cohen has started all 13 matches for the Mountaineers this season.

The Mountaineers began the week with a match on the road against Troy. The Trojans started the match off aggressively as Troy’s Ella Owen attempted a shot on goal in the 19th minute, but it was saved by junior Mountaineer goalkeeper Kerry Eagleston.

Troy continued their aggressive approach as Erin Bloomfield delivered a strike to the bottom center of the net, giving the Trojans a 1-0 lead in the 22nd minute.

In the 43rd minute, Owen took another strike at the bottom center of the net, but an acrobatic save by Eagleston allowed the Mountaineers to go into halftime down one goal.

To kick off the second half, in the 53rd and 56th minute, junior Olivia Cohen and freshman Sarah Widderich each had a shot on goal, but Troy’s goalkeeper Lindsey LaRoche managed to block them both.

With just over seven minutes remaining in regulation, Widderich delivered another promising strike on goal, but it was once again saved by Troy’s LaRoche. The Trojans closed out the game, securing a 1-0 victory over the Mountaineers.

The Mountaineers suffered another heartbreaking loss to Texas State Oct. 10. Despite the loss, they felt confident in how well they played throughout the game according to head coach Sarah Strickland.

The match was tight for the majority of the time, but with under 10 minutes left in the match, the referee called a foul on App State. This gave a penalty kick to Texas State, which resulted in them scoring the lone goal of the match.

“It’s always the referee’s judgment. There’s no instant replay or ability to review calls, and it’s something we can’t question, so we just have to deal with the circumstances and just keep on fighting,” Strickland said

The Mountaineers had several chances to score, the closest of which was a shot by Cohen in the 70th minute that bounced off the right post. Just six minutes later, sophomore Breckyn Monteith fired off a strong shot on goal, but it was saved by Texas State goalkeeper Beth Agee.

The Mountaineers had 11 total shots taken, seven of them being on target. Their seven saves and smothering defense led to a 63% majority of possession for App State, with many of their shots barely being knocked away.

“Honestly, I thought we played really well and worked really hard. There’s not much we could have done better,” freshman forward Carly Lantz said. “Obviously, it was kind of unlucky for them to get a PK, but overall we’re playing really well.”

“It’s just getting that first conference win,” Monteith said. “I think all of us are hungry for it, and we know that we’re playing great soccer. Now we just have to get that satisfaction of a win.”

The Mountaineers will try to end their recent slump as they start off a two-game road trip facing the University of Louisiana at Monroe Warhawks Oct. 15, before facing the Arkansas State Red Wolves Oct. 17.