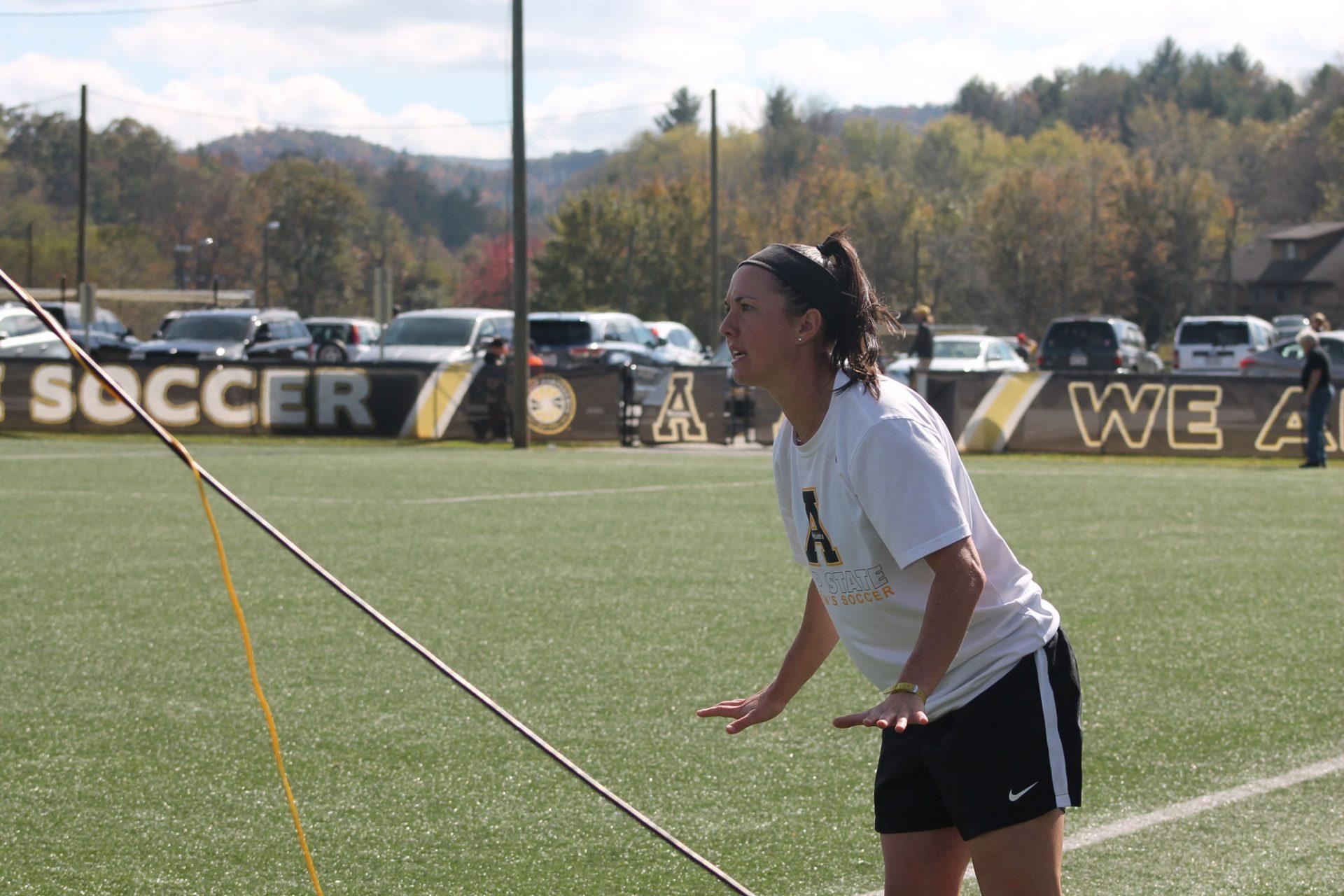 The App State women’s soccer assistant coach Brittany Bolock instucting the team from the sidelines during the game against Coastal Carolina in the fall of 2017.

Another strong class of recruits will be introduced to the App State women’s soccer  team as they look to help rebuild a squad that had a rare down year this season, due in part to having many key players suffer from long-term injuries.

The six freshmen will bring high levels of both high school and club soccer experience with many individual accolades as well as strong winning records with their team.

The Mountaineers are now hoping to replace several seniors from last season such as defender Lindsay Tully, forward Sharon Osterbind and midfielder Morgan Mosack who will all be missed by the program.

“We had three ACL tears this season, which we don’t talk about much because we don’t like to make excuses,” head coach Sarah Strickland said. “If you look at the personnel we’re recruiting, it’s a lot of goal scorers.”

All but one of the incoming freshmen hail from North Carolina including Jessica Peters, who scored 94 goals in her high school career. They will look to end the drought and give App State the edge they need to once again become competitive in the Sun Belt.

“North Carolina youth soccer is pretty incredible. There is a ton of talent here so we always recruit from here first,” Strickland said. “The other part about recruiting in North Carolina is that it makes our scholarship dollars go farther. We can get closer to being fully funded if we focus within our own state.”

Even though the team had a solid defensive record and played the majority of their opponents to very close results, they often struggled to put the ball in the back of the net after losing their 2016 leading scorer, forward Jane Cline to graduation. Cline set several program records and was named Sun Belt Offensive Player of the Year during her senior season.

Coach Strickland puts a big emphasis on building not only the team, but also a family. She has a somewhat unorthodox method of finding players that fit this family setting. Rather than just listening to what a player’s coach or teammates say about her, she also reaches out to her opposing coaches to see what they have to say about them as well.

“We look at integrity as the most important thing. Every player we look at can play but that separates them in our book,” Strickland said. “We always talk to the opposing coach and they’ll tell us very honestly. I think that’s probably the most honest way to tell.”

Out of their six incoming players, three of them are forwards with proven goal scoring records, and two of them are midfielders to join the ranks of rising junior Ava Dawson and rising senior Emmily Cowie.

“I still think we had to replace Jane Cline and people don’t want to talk about what used to be, but Jane set records for this program,” Strickland said. “This year we had some players step up that did really well, but we didn’t have that truly special forward with the breakaway pace.”

These incoming players will have several excellent role models to learn from. The aforementioned Dawson and Cowie are both prepared to usher in the new class and several reserves from last season are prepared to make the jump to becoming key players.

Rising senior forward Blair Anders, a transfer from Ole Miss, will also be a strong addition, and bring in a high level of experience from playing in the SEC, which is one of the top conferences in women’s college soccer.

Kat Greer, junior forward, the team’s leading scorer in 2017, will also be returning after a breakout season and has the potential to become one of the top players in the Sun Belt.

“We’ve seen a lot of leadership displayed this spring,” Strickland said. “She enrolled at App but didn’t play soccer. Once she joined us, she’s gotten her touch back and she’s exploding right now.”

The Mountaineers will now hope for these incoming players to adjust to the intensity and competitiveness of the college game but based off of their resumes, they should fit right in.

Combining them along with the veteran leadership and close relationships the teammates have with one another, App women’s soccer will have the opportunity to make the next big step in becoming not only a Sun Belt contender, but also potentially national success.