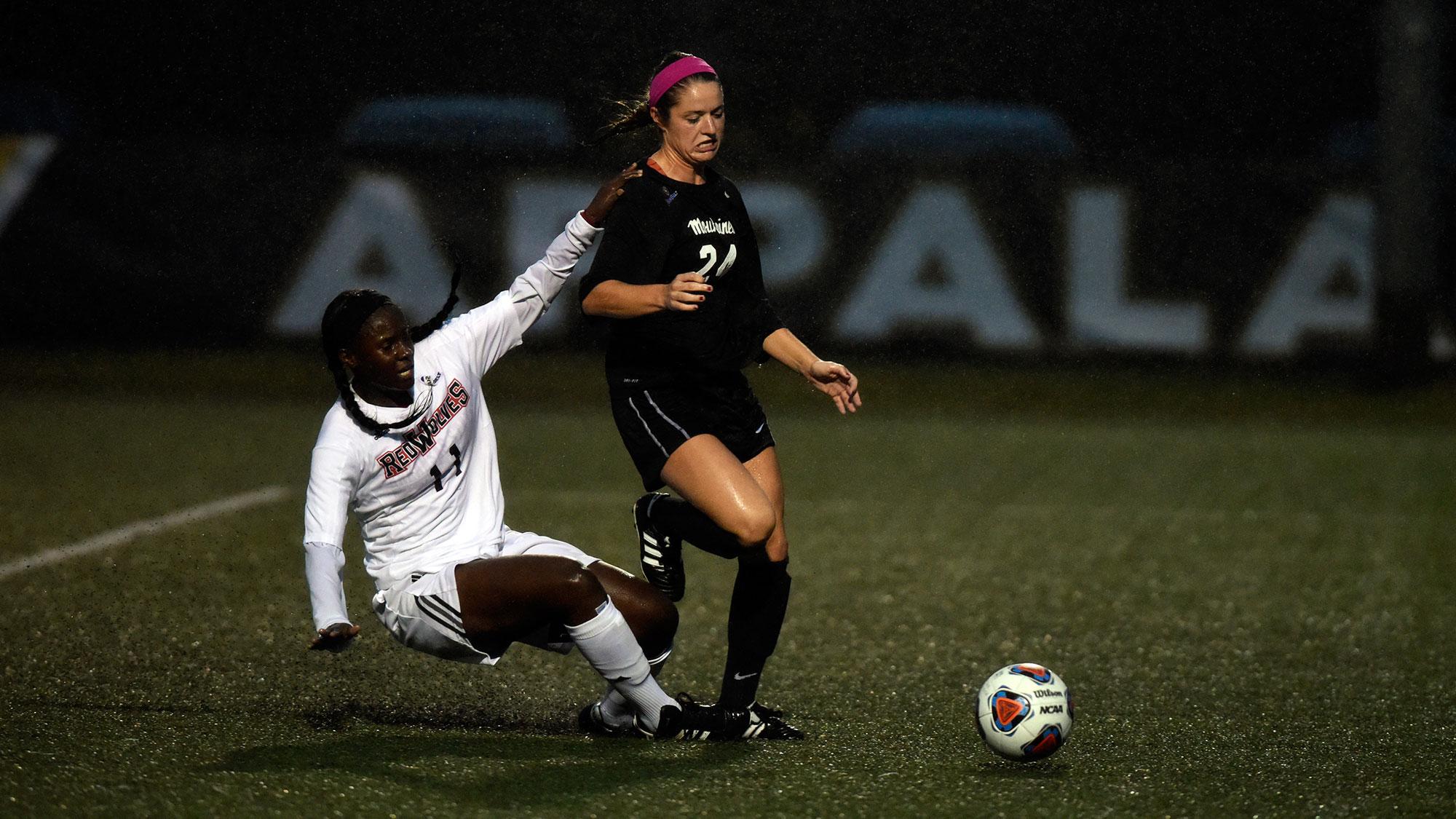 A defensive battle became the narrative of the game as the Mountaineers and Trojans both held even lines throughout the first half and played good defense in the poor weather conditions.

Junior forward Jane Cline felt that playing in the rain two days before helped them come out more prepared.

“It was definitely a hard fought game,” Cline said. “We knew it would be raining just like Friday, and we came out and worked very hard which showed a lot of character on our team.”

The first half stayed pretty even before a penalty on App State set up Little Rock for a penalty kick. Trojans midfielder Caitlin Eddy assisted midfielder Mikayla Uyokpeyi for the first goal of the game, giving them a 1-0 lead, which they’d take to halftime.

The second half began with much of the same hard-fought defense, as Appalachian State began dominating possession of the ball but struggled to score. The struggle to create offense continued until the 65th minute, when Jane Cline found the back of the net for the third time this season, tying the game 1-1.

“My goal was high pressuring which we work on during practice all the time,” Cline said. “I just went for the ball and it ended up in the back of the net.”

Cline also scored a penalty kick almost exactly one year ago, on Sept. 26, 2014, against Little Rock in a win.

With the game still tied 1-1, many bad set pieces caused the Mountaineers to miss more opportunities. Head coach Sarah Strickland felt if the team was able to not give away the set pieces, it could have been a different outcome.

“Little Rock is a good team,” Strickland said. “They are very organized and are very good at what they do. They have good set pieces and obviously, we gave a few too many set pieces today.”

As the second half went on, the referees became more strict and started handing out yellow cards to the Mountaineers left and right. The first was given to Cline during the 84th minute, on what appeared to be a foul on Little Rock.

Strickland agreed that the referees were not on point, but she felt the team managed it well.

“I thought we created a lot of opportunities and dealt with the conditions that we can’t control,” Strickland said. “The officials, weather and mistakes that we had no control over were frustrating, but I think we did a good job at managing ourselves with that.”

After regulation, the score was still tied 1-1, and the first 10-minute overtime began with more of the same defense as App State, who didn’t allow a shot by Little Rock in the second half, didn’t allow an attempted shot in the first overtime.

The referees continued to issue yellow cards, giving one to both senior forward Sam Childress and sophomore midfielder Kelly Flanders.

The Mountaineers had a chance to win the game with a penalty kick by Sam Childress during the 98th minute as Little Rock was issued a yellow card. They had two opportunities because of an illegal wall jump, but both were missed, as the second kick was too high. The first overtime ended 1-1.

During the second overtime, App State’s defense seemed shakier, as they allowed three shot attempts to Little Rock, but were still able to keep them from scoring. Freshman forward Emmily Cowie had a breakaway pass from senior midfielder Kebrina Keys at the 103rd minute but shot it just a little too late.

Both teams failed to score in the two overtimes as the teams finished in a tie 1-1. App State picked up one point in conference play after picking up three with their win on Friday against Arkansas State.

“We came out with a win the first conference game, but we need six points every weekend to set us up for the conference tournament,” Cline said. “We fought hard and got one win in the conference this weekend, so we aren’t too disappointed.”

With a lot of mistakes in the game, Strickland feels they will be able to figure it out before next weekend’s match against Texas State.

“We had plenty of shots that were on goal, but we weren’t following and trying to get that second opportunity,” Strickland said. “Our backline played well and I thought we moved well and were creative. Sometimes it’s just the game of soccer and it just happens. We will sort it out for Texas State next weekend.”

The Mountaineers take on their next conference opponent, Texas State, Sunday at 1 p.m. at the Ted Mackorell Soccer Complex.