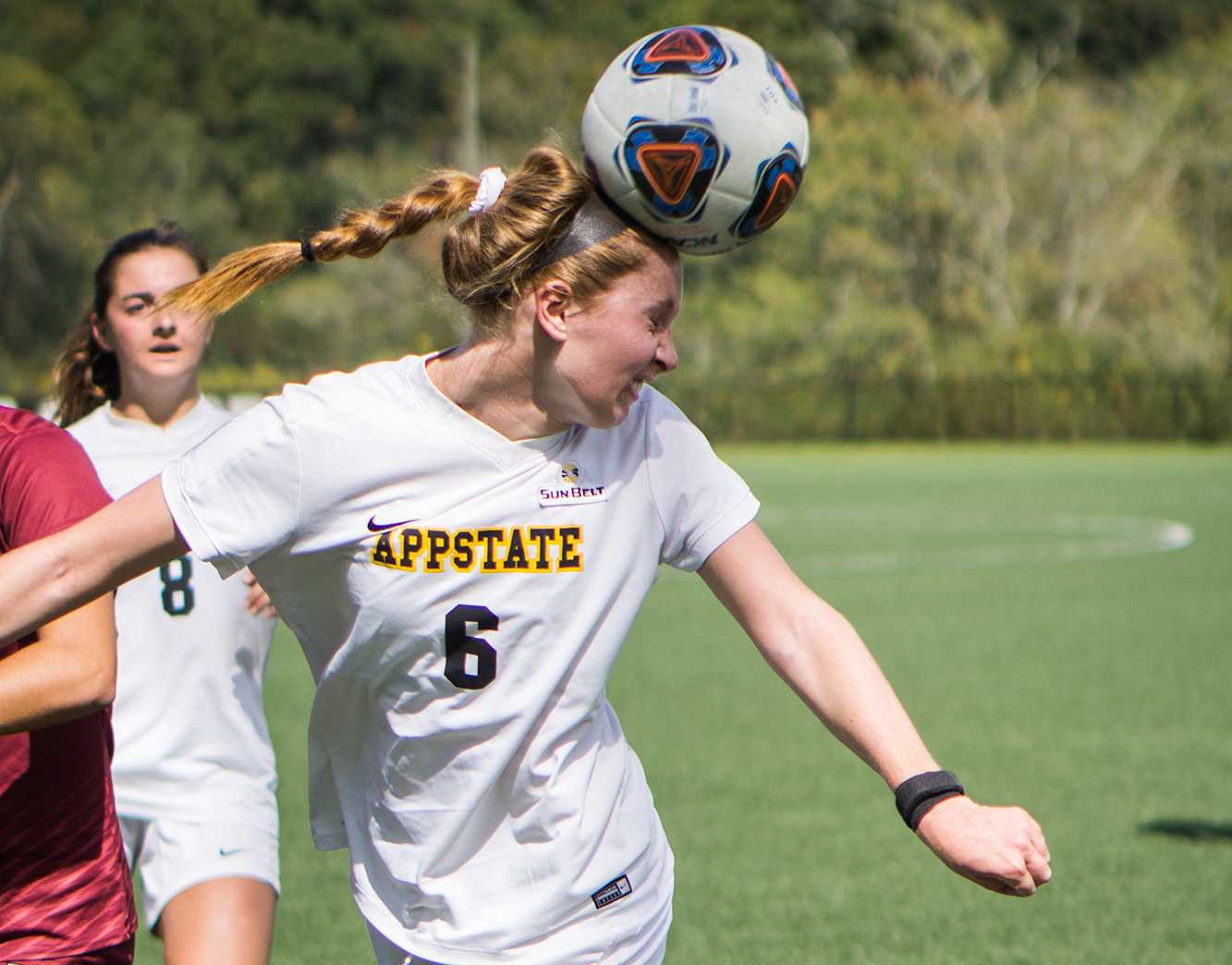 Sophomore midfield Ava Dawson heads the ball during a game against Troy in the fall of 2017.

The App State women’s soccer team finished the 2017 season with 4-11-4 overall and 2-5-2 in the Sun Belt Conference. For soccer players, staying healthy during the season is a number one goal and work in the offseason helps that.

Center back Jessica Easley is a redshirt sophomore on the women’s soccer team. During her junior and senior years in high school, she tore both of her ACLs.

“I am an all around different player, different person too,” Easley said. “A lot of people would go back and say ‘I wish I’d never have that happen to me’ but I definitely would. It changed me in who I am and my outlook on things and outlook on life. I mean it just changes you as a person, not for the better and not for the worse.”

In high school Easley was a forward but transferred to center back at App State because of the injury. She had never played center back in her life but was one of three players to start all 19 games and tied for second most minutes played at 1,727 minutes in 2017.

Because of the ACL injury in high school, Easley focused on her technical skill and getting more touches on the ball which was a big thing for her.

“Working on my speed, not just long distance running but short, quick bursts,” Easley said. “You’d think I would be the worst person to make a cut yet the 5-10-5 seems to be the best thing and who knows why.”

The 5-10-5, or the short shuttle run, is a way to test a person’s agility. Cones are placed 5 yards apart and a player will start at the middle cone. The player then shuttles laterally to one cone before reversing and sprinting to the far cone and then sprinting back to the middle cone.

In the NCAA, women’s soccer has the third-highest rate of ACL injuries, according to data from the NCAA. Sarah Strickland, App State’s head women’s soccer coach, takes ACL prevention seriously for all her players.

“The ACL warm up, it’s called an ACL prevention warm up, it started at UNC-Chapel Hill with research that they did a long time ago,” Strickland said. “We took it from there, and it doesn’t matter where we are. We can be practicing anywhere or playing anywhere and it’s the first thing that they do from the second they step onto the field.”

Strickland has been the women’s soccer coach for eight seasons and has over 18 years of coaching experience.

While warming up during the season is vital, the long offseason is another story for athletes on the women’s soccer team.

“Right now we’re in spring so we have a lot of weights and practice. Conditioning is a big part of the spring,” junior defender Alexa Asher said. “We like to focus on our nutrition and try to stay as healthy as possible.”

Asher also said that they have hard lift days and then  recovery days to try and keep balanced.

When the athletes do lift weights, they have a set routine to optimize their performance while also keeping their bodies healthy and avoid being overworked.

“We all have our percentages of weights so we max out and then we have like our 25 percent like going up,” Asher said. “So we have our smaller weeks, like 50 percent kind of, then we up to our 75 percent and then we’ll go up to our 85 percent. So we’ll keep increasing our amount.”

One of the reasons that the team does so much specific training in the offseason is so that they can reach peak fitness late in the season.

“Right now the levels that we expect are not what we expect on August 1. Even on their fitness testing, they are not achieving what they are going to be achieving in August,” Strickland said. “Today we’re looking at results from this year as opposed to last year, looking at how did they grow in the spring and in that periodization how did they grow towards our goal, and then have a really high fitness base for August and then become game fit as we go through the months so that their peak fitness level is really in late October.”

Late October is when the team starts to play more conference games and play more frequently. Playing in the Sun Belt Conference, games can be all over the country and staying healthy can be harder on the road.

“I think learning your body is super important too,” Easley said. “Preparing us for the conference. We travel a lot so that by the time we got to conference (play)  we know exactly what each person has to do in preparation for that game on Sunday. It’s just knowing your body and knowing what you need to do to prepare it.”

Easley said that she likes to take a nap before a game, but other players on the team like to eat or go for a run before a game.